We may rank low on child-mortality lists and come in after Singapore and Finland on math proficiency tests, but America has conquered the world when it comes to daily dress. Everywhere I traveled in central Europe a few weeks ago, the uniform was shorts, T-shirts, and flip flops or sneakers. All those elegantly shod women and smart-looking men from my early travels in the last century have disappeared. They have been replaced by people who look more and more like us — a little overweight, opting for comfort over glamour.

I was visiting the countries that used to make up Yugoslavia before its communist leader Joseph Tito died and the Soviet Union collapsed and the whole thing fell apart. Then they had a bloody civil war, which finally got the attention of the world with a particularly brutal massacre at Srebrenica, and all the sides were locked up in Dayton, Ohio to sign a peace accord. That was about twenty years ago, and the peace seems to be holding, although everyone hates everyone even more than before.

The Balkans are an unhappy place and you can see it in people’s faces. In Croatia and especially in Bosnia, people seem burdened by their history. How could they not be? The guide who was leading us on a walk through Sarajevo’s historic district spent 15 minutes pointing out the exact corner where Archduke Franz Ferdinand and his wife were shot and killed in 1914, which precipitated World War I. The assassin was a Bosnian Serb, supported by the Serbian military. Everyone we met in Bosnia and Croatia blamed Serbia for the latest war too. Our guide, who had lived through the war in Sarajevo, was suitably professional, but there was a touch of pride in her voice, as if to say, We may be small and poor and easy to overlook, but we know how to get your attention. 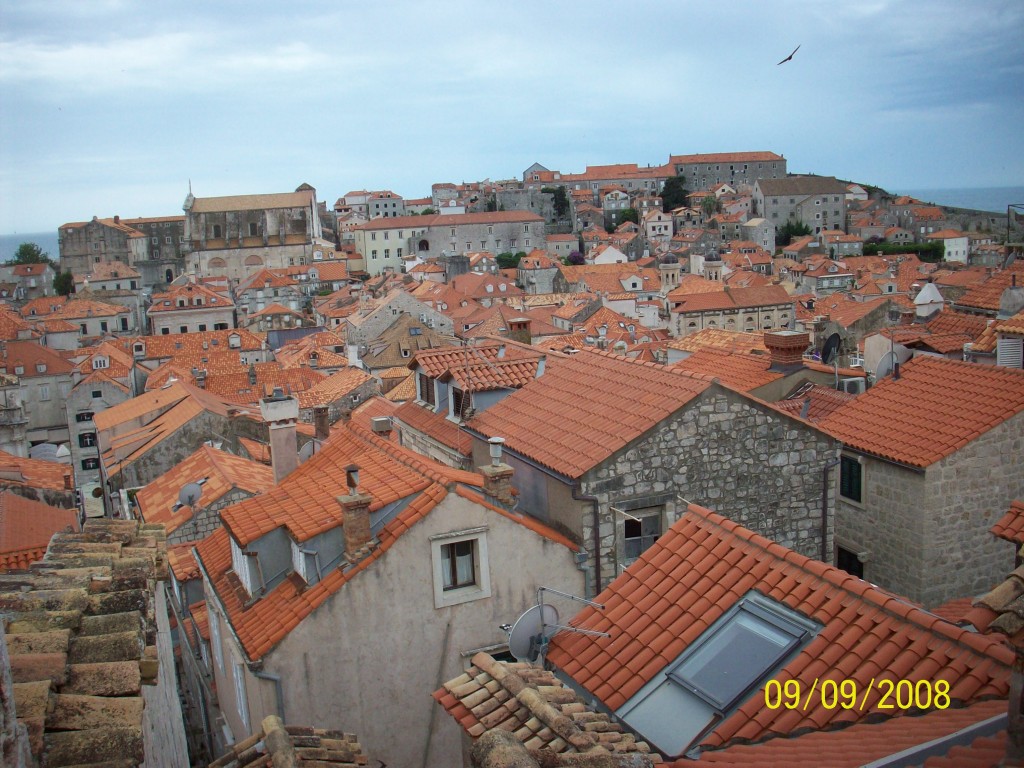 Sarajevo is an ugly city, still pockmarked by bullet holes and rubble left over from the three-year-long siege it suffered when Bosnian Serbs shelled the city from the surrounding hills. Supplies were smuggled in through a tunnel under the airport. A small part of the tunnel is open to visitors. The UN controlled the airport during the war because they had to land their planes, so that was the one place that could not be shelled.

Sarajevo’s historic center has its charms, but most of the city is “communist baroque,” as our guide dryly observed. Tall or squat concrete buildings covered in grafitti line the streets. The trees were all cut down for firewood during the siege, so there isn’t even a sheltering canopy of green to soften the brutalist architecture. Still, people go about their daily lives. The European soccer championships were on while we were there, and people crowded into cafes in the evening to watch that night’s match. It was also Ramadan, and Sarajevo’s large Muslim population was out strolling after dark, enjoying gelato and Bosnian coffee. I was taken aback by a beautiful young woman, carefully made up and dressed traditionally with a red hijab, sitting in front of the large mosque and begging. We saw a lot of beggars in Bosnia, including young children, and people told us they were Roma, who had come from Romania and Bulgaria.  What we didn’t see were homeless people sleeping on the street.

There are two synagogues in Sarajevo, an old one and a new one. The old one is a museum, which houses a copy of the famous Sarajevo haggadah. The new one, which I didn’t visit, functions as a community center. There are hardly any Jews in Sarajevo so they don’t need synagogues. There’s always something poignant for me about visiting these repurposed buildings. You got rid of us, they seem to say, but we refuse to let you forget us. As long as we’re here, Jews will come to visit and that’s enough.  We visited a synagogue in Dubrovnik too, on Jew Street. A tiny building, it houses a small museum one floor up, and then a beit tefillah a floor above that. Dark, hot, and airless, the synagogue probably reflects the lives the Jews led in Dubrovnik when they fled the Inquisition. 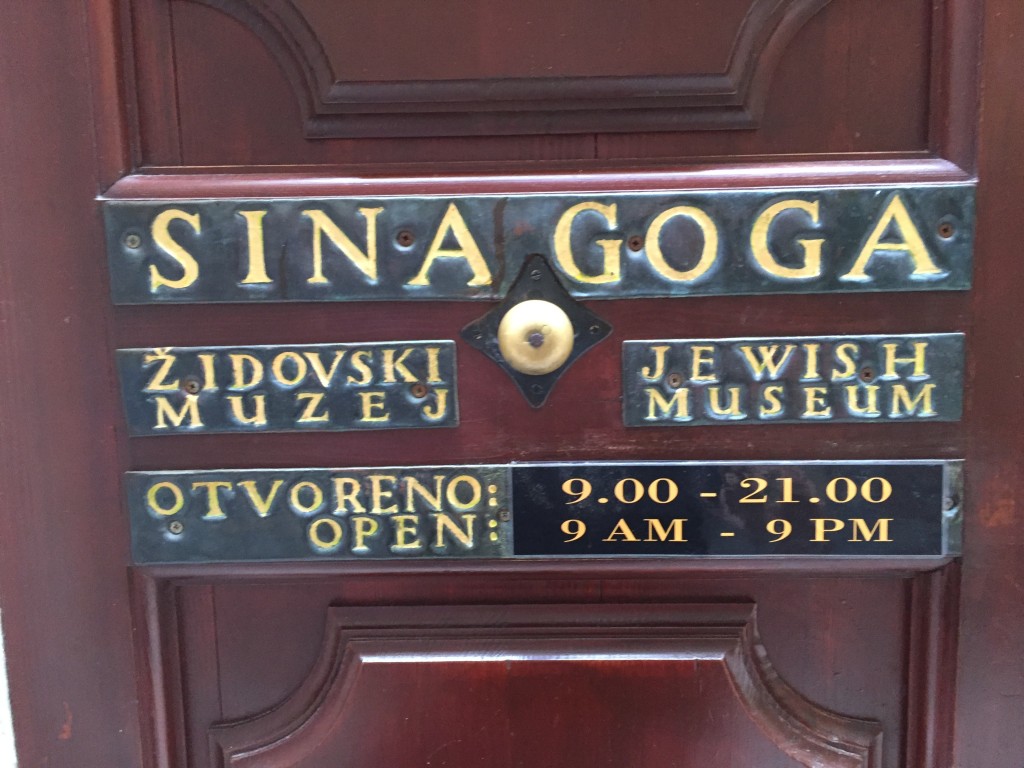 On a spur jutting into the Adriatic, the medieval walled city of Dubrovnik is a spectacular sight. I was even more excited when I recognized it on the last episode of “Game of Thrones.” (It’s the set for King’s Landing.) Cersei leaning on the wall, looking over the expanse of red tile roofs beneath her, made me yell “I was there!” Like many carefully preserved historic cities, Dubrovnik is now too expensive–and too noisy–for ordinary people to live in. With tourists wandering the streets at all hours, the residents who own property within the walls rent it out at the height of the season and move somewhere else. Who wants strangers photographing your underwear hanging on the clothesline or peering into your windows? As we were strolling along the wall, we turned to see a nervous young man on bended knee proposing to his girlfriend. As she shrieked yes, iPhones snapped. That proposal will probably show up on Facebook feeds all over the world.

Zagreb, the capital of Croatia, is also a handsome city but very different than Dubrovnik. It bears the mark of the Austrian-Hungarian empire, of which it was a part for hundreds of years, with large open squares and impressive classical buildings. Not much concrete in sight. The beautiful gothic Cathedral of St. Stephen with its two soaring spires dominates one hilltop. Croatia is overwhelmingly Catholic, and it was a Nazi puppet state during World War II. The archbishop during that time, Aloysius Stepinac, was beatified by John Paul II (another zealous anti-communist) despite his reputation as a collaborator and his conviction as a traitor by Tito’s government after the war. His supporters point out that he saved Jews and Serbs; his critics denounce him for sticking with Croatia’s fascist government till the end. It’s hard to know what to make of such men. War presents us with impossible moral choices; the older I get, the more hesitant I am to judge those choices. It seemed clear that the Croats view him sympathetically, as a man who did the best he could in difficult circumstances. Maybe that’s the way they see themselves. 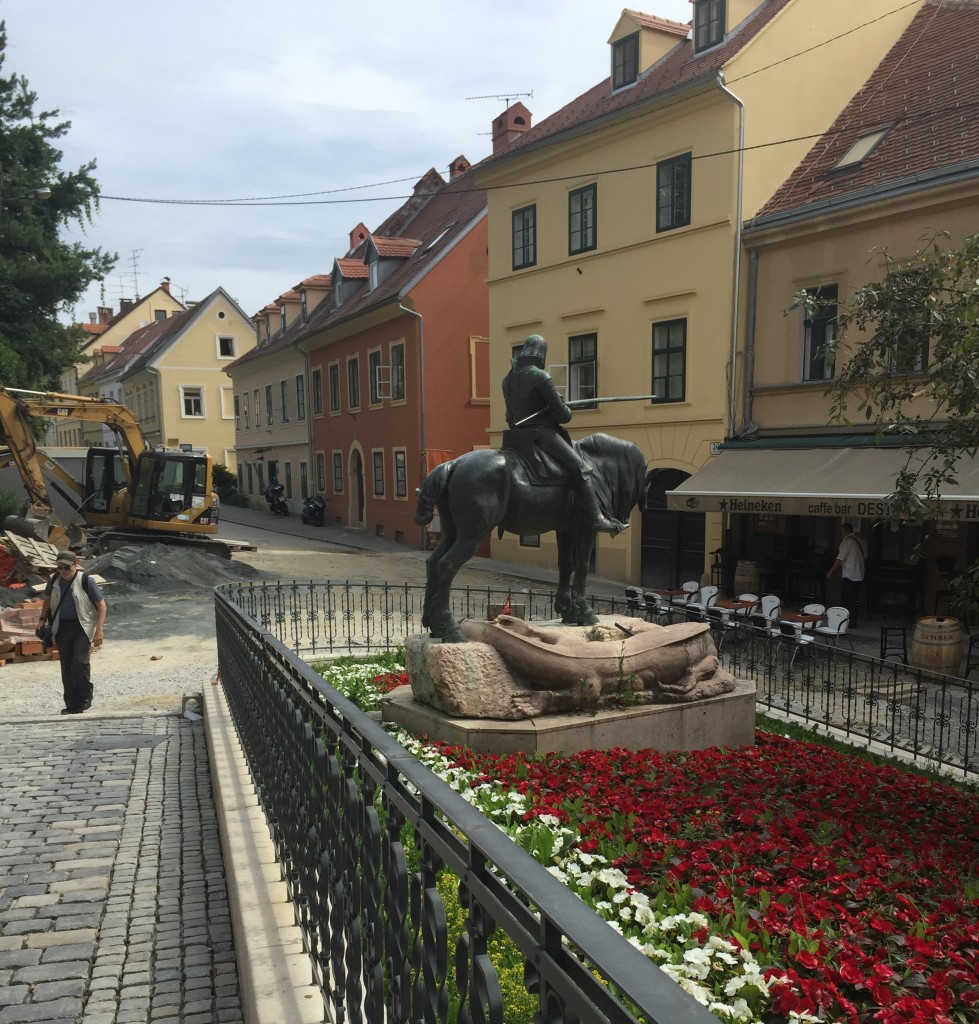 The last country we visited was Slovenia, the closest to western Europe and now a full member of the European Union. The atmosphere felt palpably different in Ljubljana, Slovenia’s capital–more light hearted, less burdened by the past. A forward-looking mayor closed the entire center of the city to traffic about ten years ago, creating a lovely pedestrian-friendly city within a city. The cobblestoned streets on both sides of the river Ljubljanica were filled with cafes, street performers, open air markets, and loads of young people, many of them pushing strollers. Croatia’s population has declined since the war, but Slovenia’s seems to be growing.

Even here, there is nostalgia for Tito and his socialist state. At a pop-up food-and-wine-truck event that happens once a month, we sat across from three young women, who were polishing off a bottle of rose in preparation for their night out. Their parents spoke very fondly about the old Yugoslavia, they told us, when everyone had a job and could go on an annual vacation. Those were good times, they felt, even though people didn’t have much money. Although they got rid of the country, Slovenes and residents of the other parts of the former Yugoslavia have kept many of the social programs Tito established. Healthcare in Croatia is run by the government, and new mothers get a year off. Higher education in Slovenia is free, which is why Michael Moore featured it in his latest movie extolling European societies, “Where to Invade Next.” 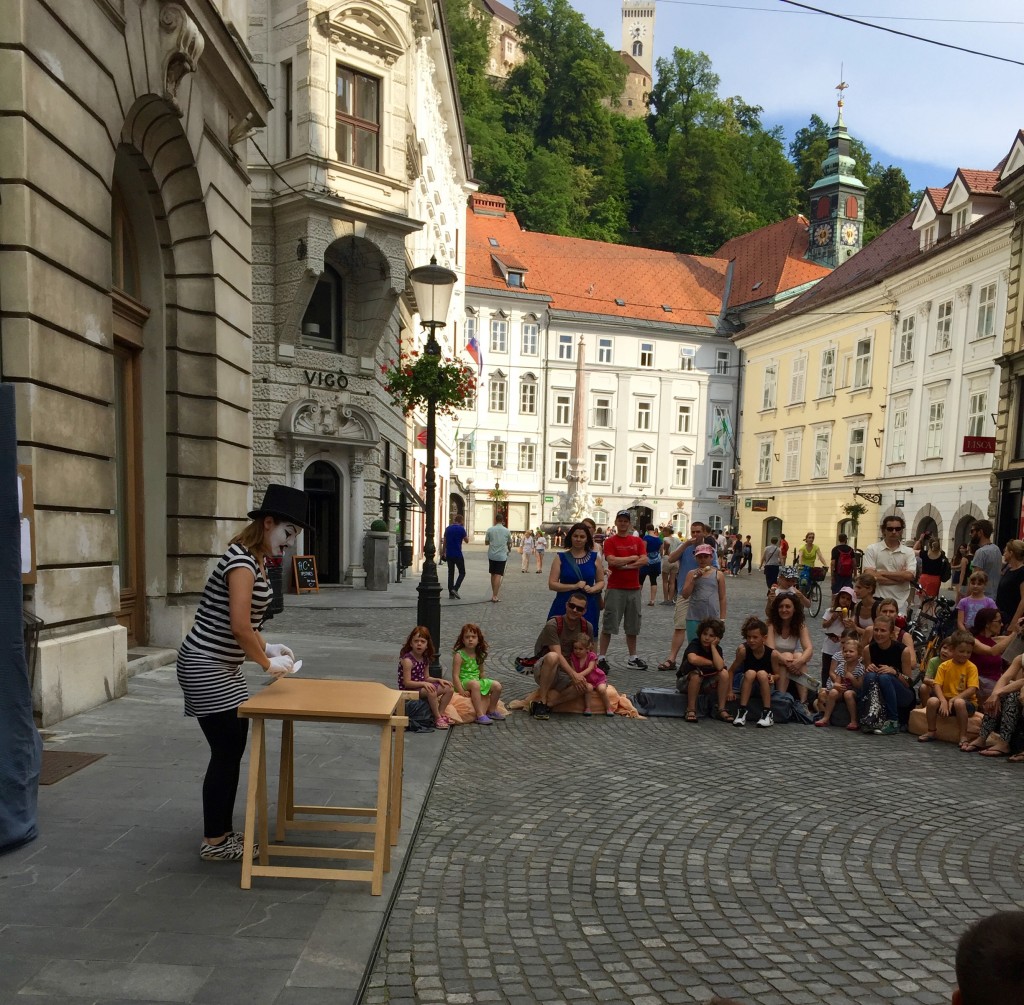 I don’t know if the people who miss Tito are conscious of the irony of what they did after his death, but spending time in these murderous blood-soaked lands made me think about both how fragile and how powerful national identity can be. Tito created a country called Yugoslavia, but soon after he was gone, the citizens of that country decided they had never been Yugoslavs, but always had been Croats, Serbs, Montenegrans, Slovenes, Macedonians, and so on. They came to this decision despite having lived together under various rulers for a thousand years, sharing the same Slavic ethnicity, and speaking almost the same language. The most obvious difference is religion: the area is split among Catholics, Eastern Orthodox, and Muslims. Religion has been so politicized here that it’s difficult to delineate faith from nationhood. How brilliant of our founders to separate the church from the state, perhaps the best of their ideas.  Our national identity is forged from a shared set of values rather than religion or language or race, and it has been remarkably resilient for a long time. But there are always forces that want to restrict that identity to older, cruder criteria. They should take a trip to the Balkans to see where that can lead. It’s a delicate balance, finding meaning in a national identity without demonizing those who don’t share it. Can we be fully ourselves without drawing strict distinctions between ourselves and others? It’s not a problem we have had to deal with for that long. Until the rise of liberal democracies, most people felt comfortable hating the other. That was how they knew who they were. That world is gone. With globalization, “the other” is everywhere now, and we have to confront who we are. It’s not an easy task.