Let’s talk about the visual arts for a change. I’ve stumbled onto the most wonderful summer–and maybe year-round–project. After watching a particularly interesting episode of PBS’s excellent “Treasures of New York” about the MTA’s Arts in Transit program, I thought it would be great fun to visit subway stations with art installations, and it has been. There is wonderful art all over underground New York City. I’ve seen some of the artworks many times, such as the Sol LeWitt tile design at Columbus Circle, 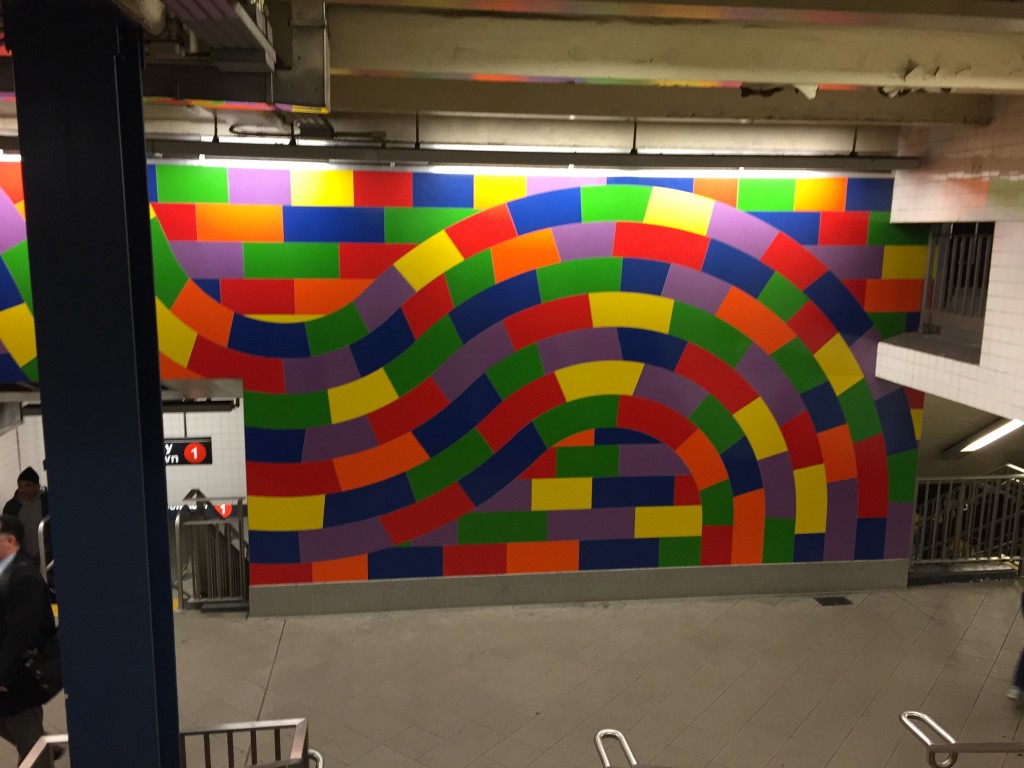 but never stopped to look. It’s tricky to find out what stations have art (not all but many do), but there is a helpful app that you can download to your phone, which aids in locating the art and tells something about it. I’ve been struck by how few people stop and look. Now that I’m taking pictures, I’m aware of everyone just rushing by, ignoring what’s on the wall. Of course, the tourist-heavy stations have elaborate art, but I found a charming artwork at the small Prince Street Station too. Now I’m looking forward to venturing into the other boroughs and seeing what’s out there. It’s a great way to visit different neighborhoods, too. 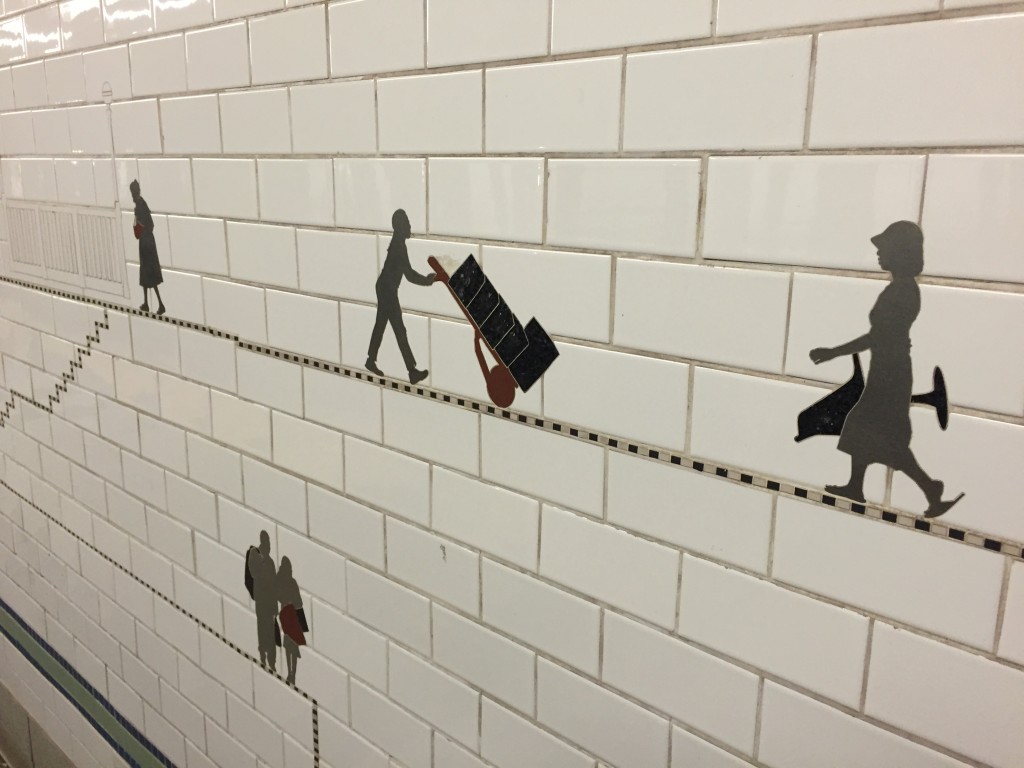 Who Is Eva Hesse?

I didn’t know anything about Eva Hesse’s work until someone sent me a documentary film by Marcie Begleiter about the post-war painter and sculptor. Hesse had a dramatic life story: born in Germany just before World War II, she was saved through a Kindertransport program and reunited with her parents and older sister in Holland, from where the family traveled to New York before the Nazis invaded the Netherlands. Hesse then had to deal with her mother’s mental illness and eventual suicide, which left her with a natural fear of abandonment. Her father, however, was devoted to her and always supportive of her artistic leanings. She had a high-class education and became a major figure in the New York City art scene of the 1950s and 1960s, where she seemed to know almost everyone. Sadly, Hesse died of a brain tumor when she was still a young woman and just beginning to be well known. Begleiter’s film is screening at the Film Forum currently, and although it’s a bit too long, it focuses on Hesse’s work as much as her life. She was a close friend of Sol LeWitt (he who is represented in Columbus Circle), as well as other artists, and merits more renown.

Jacques Audiard’s latest film “Dheepan” begins in Sri Lanka, but soon moves to the working-class French milieu of his previous movies “The Prophet” and “Rust and Bone.” At the start of the film, the central character Dheepan dumps his clothes on a funeral pyre, signalling the end of his time with the Tamil Tigers, and when we next see him, he is leaving a refugee camp with a pretend wife and daughter on his way to France. The three of them, all victims of the decades-long Sri Lankan civil war, believe they will have a better chance of receiving refugee status as a family, and they are right. After some time in a crummy refugee housing center, they are relocated to a housing estate, where Dheepan has gotten a job as caretaker. The estate is only somewhat less dangerous than the country they escaped, however. Rival drug gangs control different buildings, and as the caretaker Dheepan has to learn where and when he can cross boundaries to do his work.

This effective meld between an immigrant story and a crime thriller captures the ever-present violence that marks the lives of the characters. The thugs in the estate seem as traumatized by what they have endured as are Dheepan, Yalini, the woman pretending to be his wife, and Illayaal, the orphaned girl acting as their daughter. The advantages of the native gangsters, who are mostly of African or Arab heritage, is that they know the language and the culture. Dheepan and his family have to adapt to a new society as well as to each other, and it’s not easy.

A lot has been made of the fact that the actor playing Dheepan was once himself a soldier in the terrorist army of the Tamil Tigers. Antonythasan Jesuthasan gives a solid performance as the haunted, humorless Dheepan, as does Kalieaswari Srinivasan as the woman he picks up in the refugee camp. Her anger and irritation at him are believable, as is her curiosity about the new world they’ve entered. The film does not skirt the personal challenges they face and the psychological damage they have endured, and it is sympathetic to their attempts to build new lives after their old ones have been destroyed. Audiard is not out to give a sermon, though, and it’s easy to enjoy the movie as an exciting man-against-the-mob thriller.

Make that a Double Order

If you’re looking for something lighter on the subject of immigrants and diversity, “Dough” is a quirky, feel-good movie that’s now gotten a theatrical release. It was part of the slate at last year’s Teaneck International Film Festival, and while it has its share of flaws, it’s enjoyable if you are not feeling too cranky. Jonathan Pryce, always fun to watch, plays a kosher baker in London’s East End. Needing a new assistant, he hires a young African fellow, who happens to deal in weed on the side. In a completely ridiculous accident, the weed falls into the challah dough, and suddenly, customers are lining up out the door. Hijinks ensue.

Something Off-Broadway? How About “Nathan the Wise”

“It is enough to be a man,” says the medieval Jewish merchant Nathan, and that humanistic sentiment is at the heart of “Nathan the Wise,” an eighteenth-century German play that’s currently being revived at the Classic Stage Company on E. 13th Street. Using Edward Kemp’s 2003 condensed translation of the four-hour work by Gotthold Ephraim Lessing, CSC has stripped the play to its essence–a fierce plea for religious tolerance in a Jerusalem temporarily quiet between Crusades, as well as in our own contentious times.

The highpoint of the play at the end of the first act is a complicated fable that Nathan tells the Sultan about three rings. Lessing probably drew this story from a variety of German folktales, but it is a perfect parable to make the point that our behavior is the most effective advertisement for our faith. Lessing was also a proponent of reason; when Nathan’s daughter Rachel insists that a Christian knight is really an angel who has come to rescue her, Nathan reminds her that “God rewards the good we do on earth,” dismissing the notion of miracles.

There is a distinct shift in tone in the second act, and the pace picks up significantly. The plot goes into overdrive, with surprise revelations, almost comic misunderstandings, and a happy ending, like many of the comedies by Shakespeare, whom Lessing admired. Although some of the plot twists verge on melodrama, they undergird the theme that we are all connected. An excellent performance by George Abud as Al-Hafi, the sultan’s dervish and treasurer, adds to the play’s humane tone, and Caroline Lagerfelt alternately brings comic energy to Rachel’s nurse Daya and icy fanaticism as the patriarch.

It is sad to say that the play feels as relevant today as it was in 1779. Hundreds of years have made some of us more tolerant and understanding of each other’s faith, but many view Christianity, Judaism, and Islam as eternal competitors and threats. Despite Lessing’s optimism, the idea that it is enough to be a human being still hasn’t caught on.