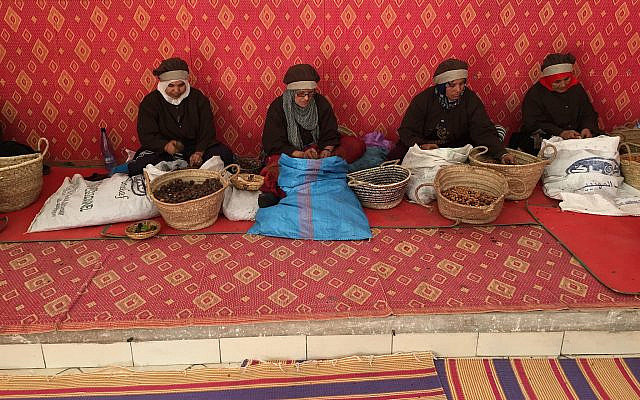 Photo taken on a visit to a Moroccan argan oil cooperative

“Additionally, the clasps in the loops, which connected the curtains to one another, looked like stars in the sky.”

What resonated with me today was the image of the sky-blue curtains woven with purple and scarlet thread that hung in the lower portion of the Tabernacle. The image of those curtains among all the dust and sand that would have been present in the desert is quite striking. I imagine what it must have been like. Our ancestors are in the arid wilderness, they have no home of their own, the sun beats down on them, they are wandering for an entire generation and yet they have their Tabernacle that they painstakingly constructed from wooden planks pulled on rickety wagons through the hot sands. And like a mirage were those curtains that were crafted by women who were able to create a thing of beauty despite the multitude of hardships they must have had to endure.

There were women who were considered the elite of weavers who crafted the curtains for the upper tier of the Tabernacle. They crafted sturdier curtains out of goat hair that was able to withstand direct exposure to the desert sun. Today’s reading equates the greater skill of the top tier weavers with wisdom: “and all of the women whose hearts inspired them with wisdom spun the goats.”  This suggests that to achieve a great skill takes years of experience and deepening knowledge of one’s craft. We are told that not only were these women skilled to be able to craft beautiful curtains out of rough goat hair, but they were able to spin the wool directly on the goats, “which required a great deal of skill.”

This short passage in today’s Daf Yomi is a tribute to the lost art of making things. There are very few items that are made by hand these days, and even fewer that are made in the United States. Our economy of the past several decades has gravitated toward one that provided services rather than goods; two years ago the service economy, which includes financial services, medical services, food services, tourism, personal services, among other categories, accounted for an estimated 67% of America’s Gross Domestic Product.

When major swarths of our businesses shut down in March due to the coronavirus, I was originally convinced that it was a short term emergency measure and given how strong our economy seemed before the virus shut it down, we could come roaring back once the illness subsided. I anticipated that a switch could be turned on once we were all safe. But the longer I shelter in place, the more I am beginning to suspect that there is no such switch and the economy that was so healthy in February is not sustainable in an environment where the virus may be impacting our way of life for several years. Many of the old services now seem untenable when personal contact can be dangerous to public health.

I would like to think we will look backwards to a time when we made things by hand, like beautiful blue curtains. But that is unlikely to be the case. The movement to conducting business on Zoom is hastening the onset of a digital revolution, which many of us are experiencing as we are working from home and living our lives in a virtual state of reality. The digital economy will allow certain sectors of the service industry to become more profitable through lower overhead, leaner staffs and higher productivity. Other service sectors, such as personal services, may never fully recover to a level where they were earlier this year before they were shut down. Their recovery may be hampered in the near future by the Governor of California’s statement that community spread started in California in a nail salon. He has since backed away from that story, but it has become imprinted in people’s consciousness.

Where do we go from here?  What will our economy look like in two years from now? How will we employ all the former service industry employees? Will a vaccine become available in the next year that will allow the personal service sector to be viewed as safe?  Is it possible to make things again like lovely blue curtains?

I included an image from a trip I made to an argan cooperative in Morocco five years ago. The women painstakingly extracted argan oil nuts from their shells by hand. This is tough work. I tried to open one nut myself and it was very difficult.