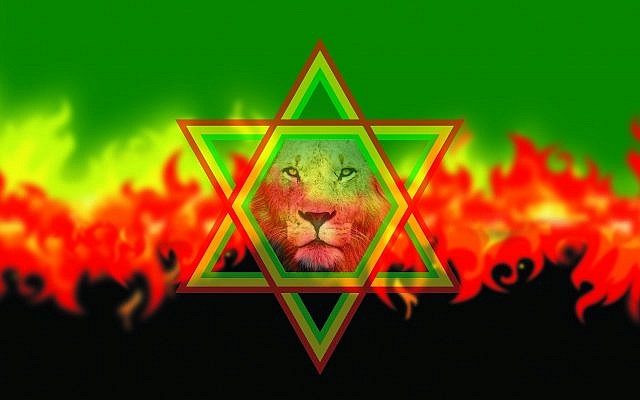 Sister can mean more than just siblings. Cities can “sister.” A sister city relationship is a formalized relationship between two cities to promote cultural and commercial ties. These are normally relationships of mutual respect and similar values. However, sometimes cities can make huge errors through uninformed choices.

Pittsburg, USA publicly floated the idea of partnering with Kaunas in Lithuania. That is, until they discovered Kaunas’s comprehensive program of honoring Holocaust perpetrators. Somehow, Kaunas city officials just “forgot” to mention these “minor” details while selling the concept of becoming “sisters”. 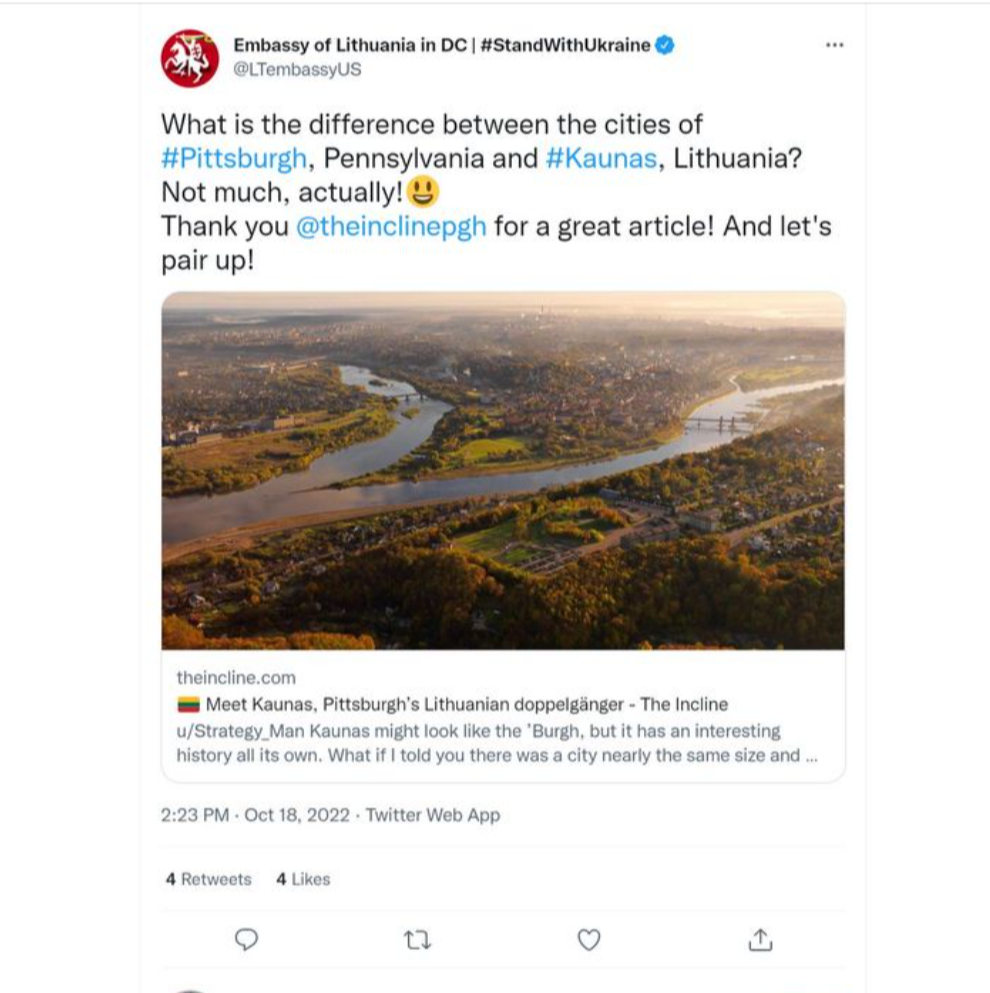 Since Pittsburgh discovered the truth, we have heard no more about their proposal. Pittsburgh was saved from very damaging reputational damage.

So too, Kaunas sold a relationship to Brescia, Italy. I am certain that no city in Italy finds a systemic program of glorifying Holocaust perpetrators tolerable. Undoubtedly, this information was deliberately hidden from Brescia. 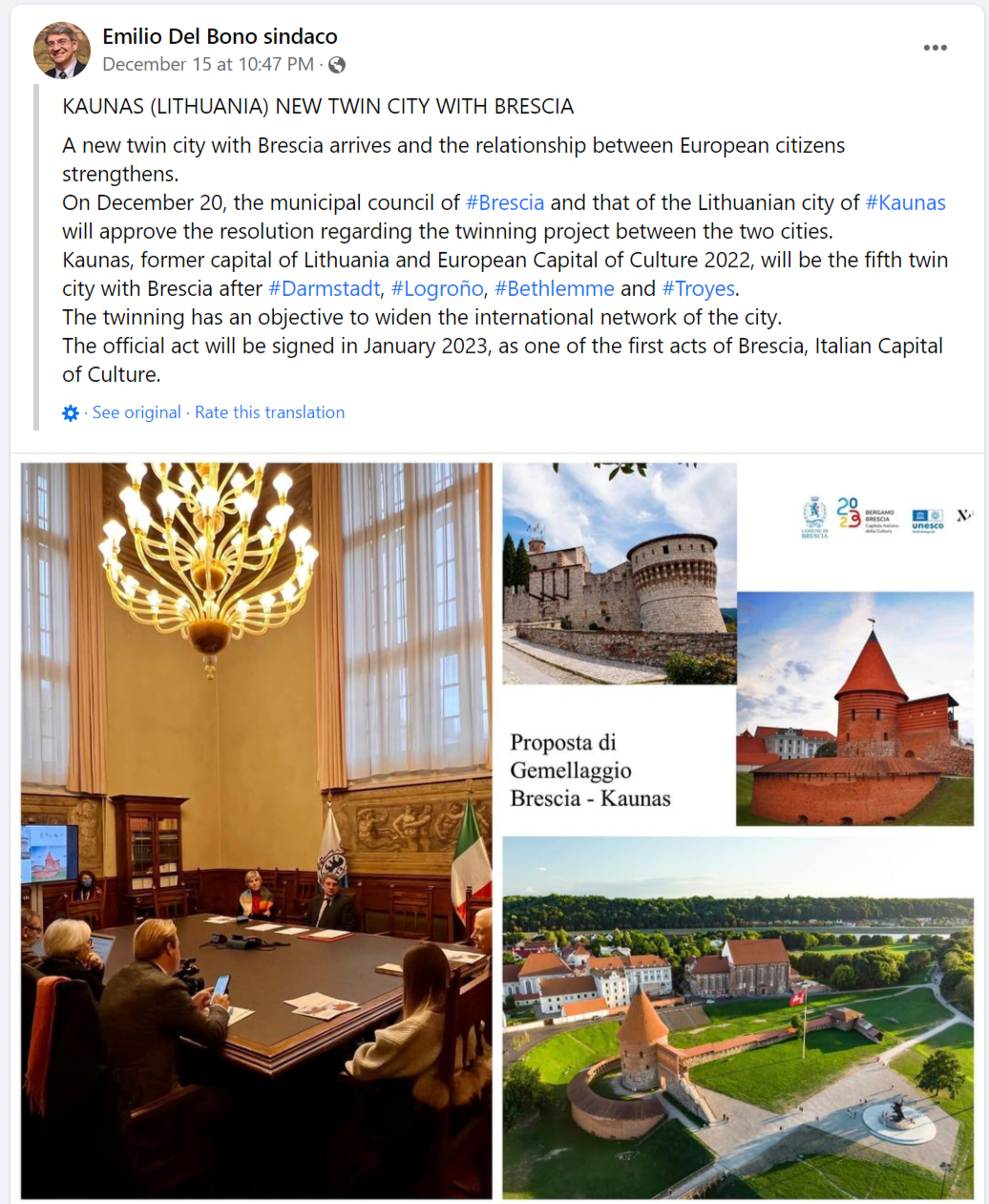 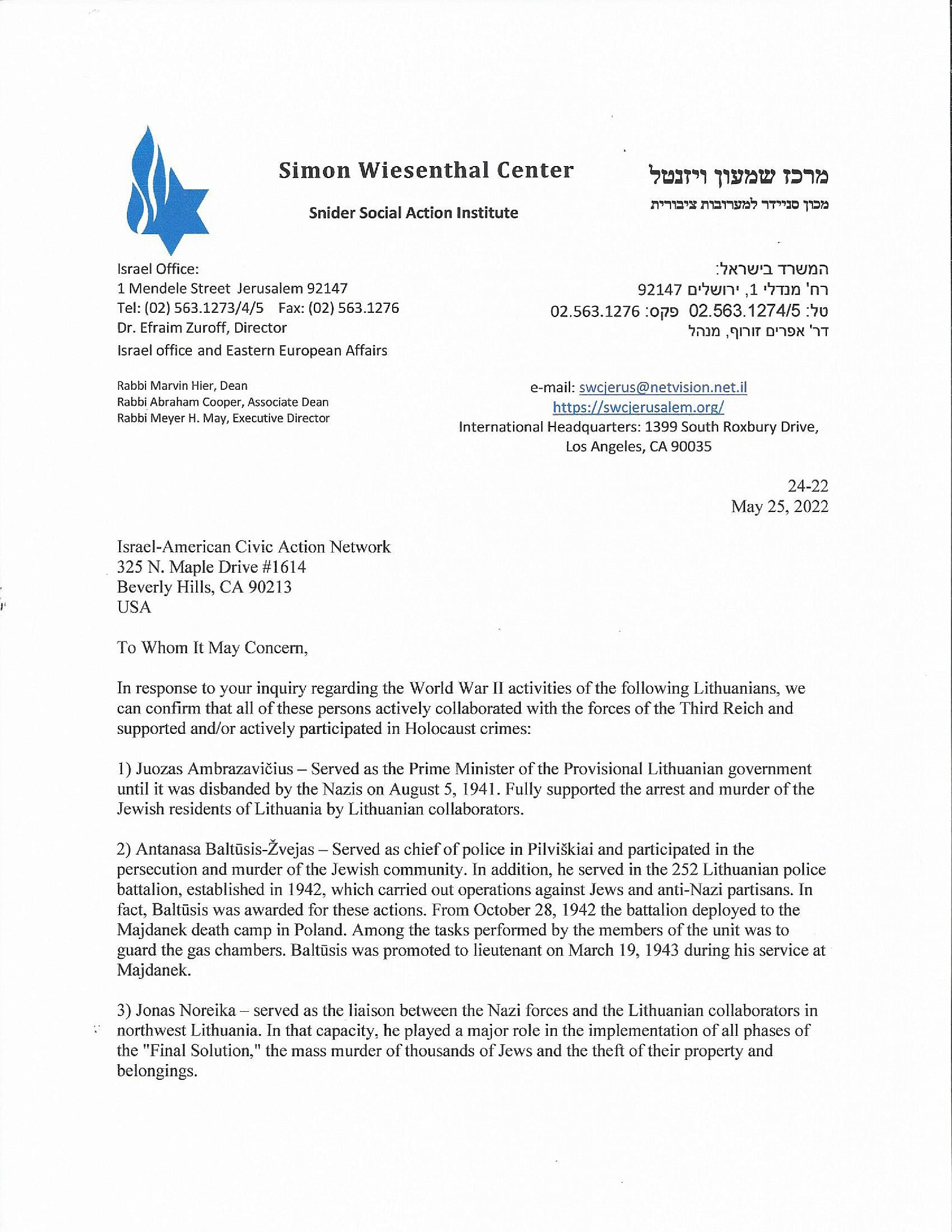 Kaunas also has sister city relationships with Bialystok in Poland, Brno in Czech Republic, Cava de’ Tirreni in Italy, Grenoble in France, Kharkiv in Ukraine and Linkoping in Sweden. Do these cities know what they have as a partner? It is certain none of these cities were informed of the honors, street names and monuments Kaunas bestows on Holocaust perpetrators.

When Lithuania solicits these image building relationships, I am certain they also do not mention the City Resolutions condemning their Holocaust glorification programs.

Lithuania is on an international charm campaign. They just negotiated a Sister City relationship between Herzilia and Anykščiai in Lithuania. Anykščiai has a population of 10,500 people and a Holocaust history which is not widely known. Did Lithuanian Ambassador Antanavičienė address the facts of the Holocaust in Anykščiai, or were these somehow neglected? 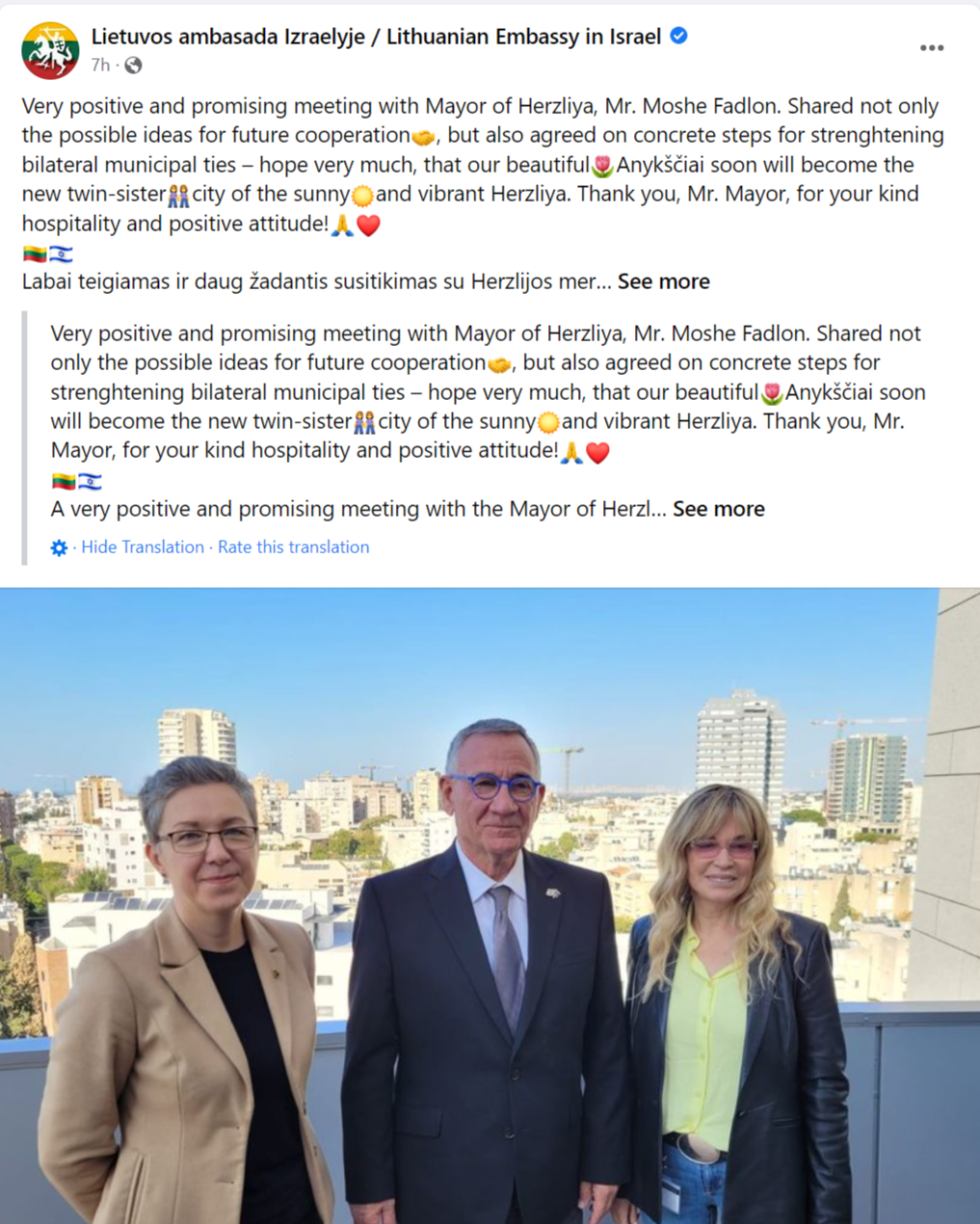 Perhaps Mayors and city councils around the world should perform deeper due diligence before associating their own image with Lithuanian “sisters’, and save themselves causing reputational damage to themselves?

A documentary currently in release, J’Accuse! dissects Lithuania’s Holocaust deception program. International partners should educate themselves before accepting any representations from Lithuania at face value. 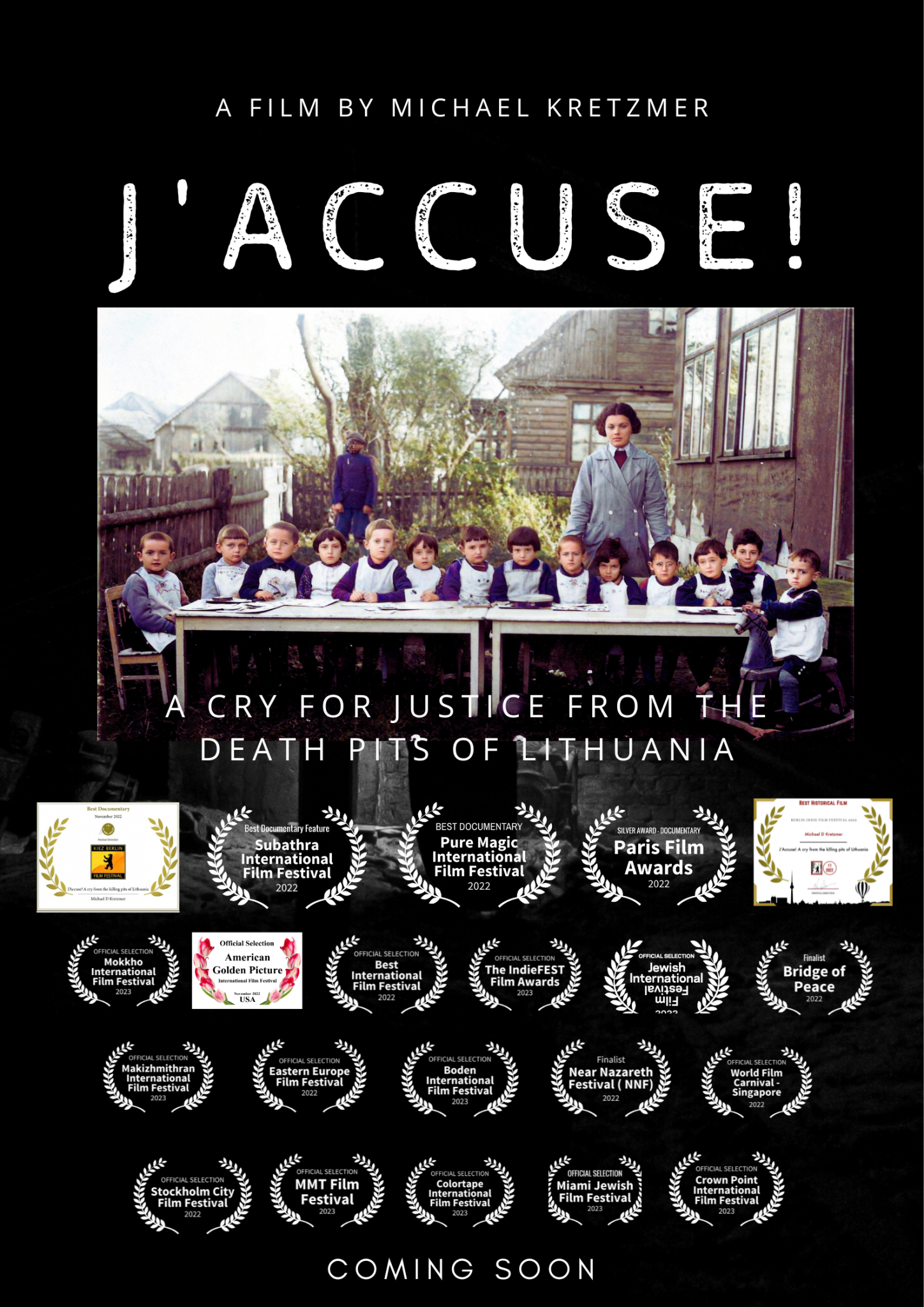 Source: Michael Kretzmer
About the Author
Grant Arthur Gochin currently serves as the Honorary Consul for the Republic of Togo. He is the Emeritus Special Envoy for Diaspora Affairs for the African Union, which represents the fifty-five African nations, and Emeritus Vice Dean of the Los Angeles Consular Corps, the second largest Consular Corps in the world. Gochin is actively involved in Jewish affairs, focusing on historical justice. He has spent the past twenty five years documenting and restoring signs of Jewish life in Lithuania. He has served as the Chair of the Maceva Project in Lithuania, which mapped / inventoried / documented / restored over fifty abandoned and neglected Jewish cemeteries. Gochin is the author of “Malice, Murder and Manipulation”, published in 2013. His book documents his family history of oppression in Lithuania. He is presently working on a project to expose the current Holocaust revisionism within the Lithuanian government. He is Chief of the Village of Babade in Togo, an honor granted for his philanthropic work. Professionally, Gochin is a Certified Financial Planner and practices as a Wealth Advisor in California, where he lives with his family. Personal site: https://www.grantgochin.com/
Related Topics
Related Posts
Grant Arthur Gochin