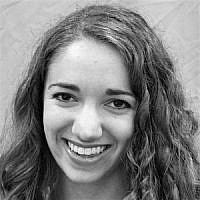 The Blogs
Nikki Golomb
Apply for a Blog
Please note that the posts on The Blogs are contributed by third parties. The opinions, facts and any media content in them are presented solely by the authors, and neither The Times of Israel nor its partners assume any responsibility for them. Please contact us in case of abuse. In case of abuse,
Report this post.

This blog post is written in loving memory of Hallel Ariel, zichrona livracha. Hallel, 13, was murdered as she slept in her home in Kiryat Arba in June 2016. This year, two dance troupes in the DC area are bringing her memory back to life through her greatest passion – dance. May her memory always be a blessing.

Kesem is the Hebrew word for magic; Yesodot means foundations. These words may seem unrelated but to me and many others in the DC community, they are anything but. Kesem and Yesodot are, respectively, middle school and high school Israeli dance troupes in Montgomery County, Maryland, and I was fortunate enough to be a part of this amazing community for all four years of high school.

What is Israeli dance, you ask? Most people think of the hora, or other folkdances you may have pretended to hate but secretly loved while at camp, but in reality it is so much more than that. Israeli dance is an expression of thousands of years of history and a world of culture as diverse as the global Jewish community itself. Israeli dance transcends language, nationality, gender, and age; I have danced with people I have nothing apparent in common with, people I can’t even communicate with, while halfway around the world, because that’s what Israeli dance does: it brings people together.

Kesem means magic. Yesodot means foundations. At this year’s DC Israeli Dance Festival, Kesem and Yesodot are truly living up to their names in every sense of the word by using dance as a foundation to bring a girl, through her memory and through her dancing, back to life.

When Marnina Cowan, the director of Kesem, approached me about writing this article, she was not sure if I heard about or remembered the story of Hallel Ariel, z”l. But how could I forget? At just thirteen years old, Hallel was murdered in her sleep in her home in Kiryat Arba. The news was everywhere. I cried over this girl I had not known, a young girl with her whole life ahead of her being robbed of her chance to live it. How could I have forgotten?

But the truth is, I knew only of her death. I knew nothing of the life of Hallel, a passionate, enthusiastic, active young girl. How could I claim to “remember” her when all I knew of were the brutal details of her murder, when to me she was nothing more than another name in a long list of Israeli victims of terrorism?

By speaking with Hallel’s mother and dance instructor, Marnina has been working to build an image of Hallel beyond that of her death to those who did not know her. This is the image of a young girl who loved to dance more than anything else. At this year’s Israeli Dance Festival in DC, Kesem and Yesodot will debut a dance in memory of Hallel, ensuring that she is remembered in her death the way she was perceived in life: first and foremost, as a dancer.

“The whole purpose of this project is not to memorialize this girl,” Marnina told me. “It’s to carry on Hallel’s legacy through what she loved most, which was dance…and also to empower a group of 40 teens to lead their community in remembering an Israeli girl who was killed, who could have been their friend because of their shared love of dance.” The project, called “For Hallel…One of Us”, pays tribute to Hallel in a way that celebrates her life and communicates a message of hope to those who see it.

Israeli dance tells a story. It is founded on a people whose culture transcends national borders, language, and even spirituality; people who seem to have nothing in common are able to come together and learn a story through dance. In their suite, Kesem and Yesodot tell the story of a young girl who, just like them, loved to dance. Hallel is, in so many ways, one of them – or rather, one of us. By including Hallel’s own dance steps into Kesem and Yesodot’s suite, her very actions are remembered and relived. The dance personifies Hallel, changing our own memories about her from “the girl who was a victim of terrorism” to “the girl who loved to dance.” Kesem and Yesodot bring a certain magic to the stage by bringing Hallel back to life through dance, if only for a moment. Israeli dance provides a foundation through which her story is communicated and shared, and the memories we have of her and the dance will remain for a long time. The dance will continue to be performed in the DC area after the festival, ensuring that Hallel’s story and the project’s message continue to be shared.

Although the true magic of the project takes place on stage, Kesem and Yesodot have taken the project one step further by beginning a fundraiser in Hallel’s memory. Rena, Hallel’s mother, asked the troupes to promote acts of chesed (kindness) in her memory. To do so, Kesem and Yesodot set up a GoFundMe (https://www.gofundme.com/hallel-ariel-fund) with the goal of raising $15,000 for Ginat Hallel, a playground that will be built at the school where Hallel studied and where her sister continues to study. The tireless work of Marnina, the dancers, and the friends and family of Hallel all serve the same goal: to continue Hallel’s legacy through dance, love, and acts of giving.

I have been Israeli dancing for over eight years, yet I am still learning about the art. To me, Israeli dance has always been a way of bringing people together, but I now see that it is much more than that. Marnina has shown me, the dancers of Kesem and Yesodot, and all those who will see the DC Israeli Dance Festival that Israeli dance has the power to bring a girl and her memory back to life. And if that isn’t magic, I don’t know what is.

To learn more about this project, a short documentary has been created following the work of Marnina and the dancers involved in the performance.

About the Author
Nikki is a Hillel professional, a proud Jew, and an Israel advocate. She loves travelling and learning about other cultures, particularly how Jews around the world experience their Judaism.
Related Topics
Related Posts
Comments