The government of the Islamic Republic of Iran is trying to participate in Russia’s aggression against Ukraine. They try to participate in this war through the sale of military equipment. This new phenomenon needs analysis and to be explained. 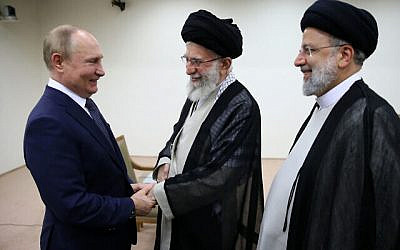 Behind the curtain is Khamenei’s full-fledged defense of Russian aggression against Ukraine. Khamenei, in a catastrophic mistake, called the invasion of Russia, “Moscow’s initiative” which is a catastrophic mistake and “probably his elderly adviser on international affairs, namely Ali Akbar Velayati is behind this phrase”; Soon after, Kayhan and Javan newspapers, close to the supreme leader and the Iran’s Islamic Revolutionary Guard Corps(IRGC), demanded Tehran’s participation in Moscow’s war against Ukraine by theorizing and creating hypotheses. 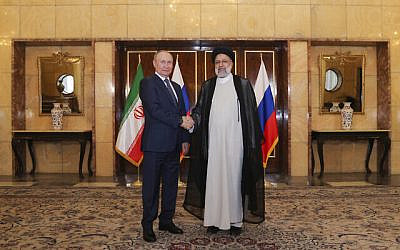 In this photo released by the official website of the office of the Iranian Presidency, Russian President Vladimir Putin, left, and his Iranian counterpart Ebrahim Raisi shake hands for media at the start of their meeting in Tehran, Iran, Tuesday, July 19, 2022. (Iranian Presidency Office via AP)

Khamenei’s organization continue the wrong analyze of the world situation which has been started many years ago. Surprisingly no one in Iran, like many totalitarian orders, dares to question it. Khamenei and Qassim Soleimani tried for almost two decades to develop the regional and global evils of the Islamic Republic and in this way, they relegated the foreign policy apparatus to the role of a procurer.

Their efforts were in vain. All these efforts brought for Iran was the distance of the neighbors, the increasing hatred of this regime in the world, the significant fall in the value of the national currency, and finally the spread of poverty and misery of the people.

The supreme leader of the Islamic Republic called Putin’s attack on Ukraine premeditated, which shows his ignorance and his advisers’ negligence of the global situation; the newspapers under his control, Kayhan and Javan, claimed in a more confused interpretation: »If the Russians did not take the lead in the attack on Ukraine, America and NATO would have come to Iran, just as Hezbollah took the lead in the 33-day war in Lebanon, otherwise the enemies would have taken the initiative of the resistance front!« With these statements, the task of the world was determined with Iran’s confused positions in the Ukraine war.

So far, the world thought that Iran was observing the declared policy of neutrality but now, after these statements and positions, and two other dangerous decisions, the regime of the Islamic Republic is participating in Russian invasion of Ukraine.

But what are these two dangerous decisions? 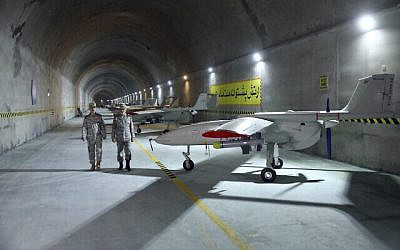 In this photo released Saturday, May 28, 2022 by website of the Iranian Army, Chief of the General Staff of the Armed Forces Gen. Mohammad Hossein Bagheri, left, and Commander of the Army Gen. Abdolrahim Mousavi talk while visiting an underground drone base tunnel of the Army in the heart of the country’s western Zagros Mountains. Iranian state television’s report said Saturday, May 29, the tunnel was some 100 meters (330 feet) underground and was home to the Kaman-22 and Fotros drones, both capable of carrying cruise missiles. (Iranian Army via AP)

First, the decision to give drones known as Shahed 129 and 191 to the Russians to help them to advance their illegal aggression against Ukraine and killing more people and civilians of Ukraine. The Shahed 191 drone is a reconnaissance drone that helps the Russians in electronic warfare against Ukraine. Second, The decision to establish a trial court for prisoners of war and Ukrainian soldiers which will be held probably in Iran, Syria or Bolivia. Apparently, Tehran has given the green light to host this scandal. 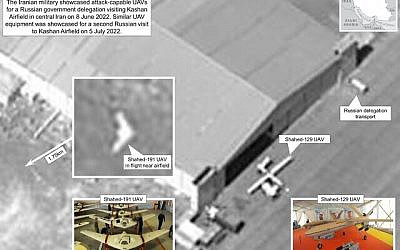 Satellite images of a Russian delegation visiting a showcasing of Shahed-191 and Shahed-129 drones at Iran’s Kashan Airfield released by the White House on July 16, 2022. (White House)

This decision was announced after the head of the Russian Investigative Committee accused 92 members of the Ukrainian armed forces of crimes against humanity and announced the above three countries as possible locations for these courts.

In fact, when most of the heads of the regime of the Islamic Republic are accused of crimes against humanity, and for nearly half a century, their hands have been stained with the blood of thousands of Iranians and non-Iranians, this court looks ridiculous.

Tehran is a master of red herring and deceiving the world community. They can quickly deny any military cooperation with the Russians in the war with Ukraine and deceive the world community. For more than 4 decades, the strategy of deception has been used as the basis of the national and international policy of the Islamic Republic of Iran. They have always carried out their work with lies and staging.

They have deceived Europe and America for nearly three decades under the pretext of continuing negotiations. Every time they negotiate “for the next round of negotiations”, but the fact is that Iran bough so many years and now they are on the verge of reaching nuclear weapons.

During the military presence in Syria, the mullahs’ regime denied its military presence in the bloody suppression of the Syrian people by pretending to be an adviser. This regime now lacks a skilled operational commander with an Iranian identity; Most of their overseas operational forces are consists of proxy mercenaries who will commit murder and engage in sabotage operations in exchange for receiving money.

Now the Iranian regime is trying to change the balance of the war in favor of Moscow by supplying Russian weapons in the Ukraine war.

Military analysts believe that even in the event of a full-scale war against the Iranian regime, Iranian forces will not enter personally and the army of mercenaries of this regime in Yemen, Iraq and Lebanon will launch devastating attacks in several directions “with Iranian military equipment”.

Because of this, many observers say that Iranian drones, which are the result of “reverse-type” engineering, may not be able to do much special work in the war scene of Ukraine. On the one hand, the regime of the Islamic Republic does not have the ability to mass produce these drones, and on the other hand, their weapons warehouses in Syria are regularly bombarded, but it seems that Iran has a serious determination to declare war against Ukraine.

However, it should not be overlooked that the positions of Khamenei and the IRGC in officially siding with the Russians and handing over even one drone and even one bullet will be considered the intervention and participation in the Russian invasion; without a doubt this act must bring serious consequences to them.

The juxtaposition of the Islamic Republic regime and notorious and aggressive governments like Russia is not far from the mind. Almost two decades ago, this regime was on the list of evils announced by the American Republicans. Today, not only they have not deviated a bit from this path, but they have also expanded their scope of evil. Ukrainian authorities, including Zelensky adviser, believe that Tehran’s pretense of neutrality in the war is a lie. They believe that Iran’s cooperation and complicity with the Russians is helping to kill more defenseless Ukrainians and thus it’s contributing to crimes against humanity. 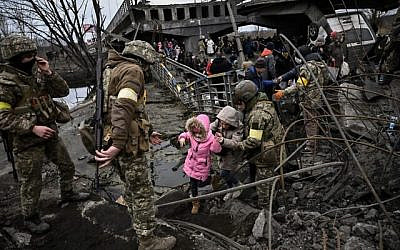 A child evacuates the city of Irpin, northwest of Kyiv, during heavy shelling and bombing on March 5, 2022, 10 days after Russia launched a military invasion on Ukraine. (Aris Messinis / AFP)

In Tehran, a mad haste can be seen regardless of being on Russia’s side, which can have negative effects on the people of Iran. Even Beijing, as a global power aligned with Moscow, has not adopted such publicly support that the Islamic Republic has taken. Now the question is why the Russians want to open the feet of the Islamic Republic to a trap that can have devastating consequences for the under pressure people of Iran? analysts say the irresponsibility of the Tehran regime towards his people and not having care about the fate of its own people are the main reason why Iranian government can support Russians unquestionably and without considering the consequences.

The second reason has a military origin. According to military analysts, the Russians’ weakness in drone operations in Ukraine and the erosion of this war caused them to express their desire to use Iranian drones in their operations.

The third reason can be political; The Russians use the regime of the Islamic Republic as a tool. Their only goal is to involve Iran in this dangerous game to disrupt the international order and security.  For this purpose, they have made Iran a plaything for their political prey. Therefore, the leaders of the Islamic Republic are supporters of the crimes against humanity and the crimes against their own people, the nations of the region and the world. Russians have made Tehran a candidate for the establishment of a court to try Ukrainian prisoners of war. Tehran should prepare itself to pay a heavier price because it has sided with a government that is committing war crimes, crimes against humanity. The continuation of this policy makes Iran’s case darker and darker.

In sum, considering Khamenei’s dependence on his godfather (Vladimir Putin), which political analysts refer to as a one-sided love, it can be said that Iran is moving forward “with the policy of getting closer to Moscow” and the intensity of this dependence is such that Tehran prefers to align with Moscow in the choice between revitalizing the JCPOA and implementing Putin’s policies.

In general, considering Khamenei’s dependence on his godfather Vladimir Putin, which political analysts refer to as one-sided love, it can be said that Iran continues the policy of getting closer to Moscow’s. Iran is so dependent to Moscow that prefers to align with Moscow than revive the JCPOA.