The battle’s been raging for decades, complete with egos, trash talk and reputations on the line. I’d like to say this is not a political discussion but then again, when analyzing the Jewish presence in the Land of Israel, that can’t be avoided. Nuclear warfare? Global warming? Nope, nothing that limited in scope. We’re talking the debate over the chronology of the Iron Age in the southern Levant (here!).

For scholarly details, see here: www.rehov.org. For a layman’s orientation, take a look at the latest released information on finds from the Valley of Elah, just down the road from our home. It seems that the past does speak to us, quite clearly, and can hopefully solidify the stories of the Bible as handed down to us through the generations. 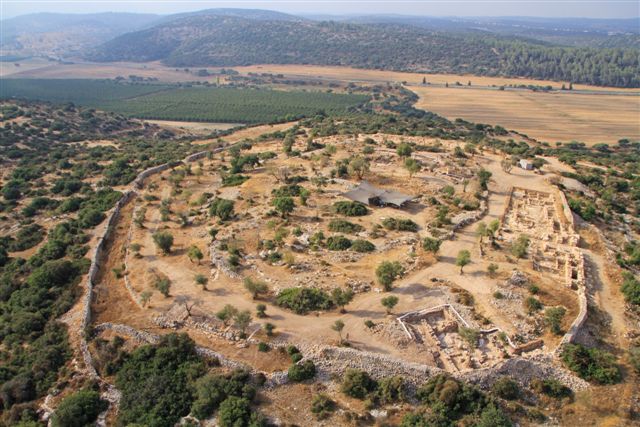 Aerial picture of the site at Khirbet Qeiyafa

See for yourself (as transmitted):

A rare inscription from the time of King David was discovered at Khirbet Qeiyafain the Valley of Elah. A ceramic jar c. 3,000 years old that was broken into numerous sherds was discovered in 2012 in excavations carried out there by Prof. Yosef Garfinkel of the Institute of Archaeology of the Hebrew University and Saar Ganor of the Israel Antiquities Authority. Letters written in ancient Canaanite script could be discerned on several of the sherds, sparking the curiosity of researchers.

Intensive restoration work solved the riddle – the jar was incised with the inscription: Eshbaʽal Ben Badaʽ…

According to Professor Yosef Garfinkel of the Institute of Archaeology of the Hebrew University and Saar Ganor of the IAA,”This is the first time that the name Eshbaʽal has appeared on an ancient inscription in the country. Eshbaʽal Ben Shaul, who ruled over Israel at the same time as David, is known from the Bible. Eshbaʽal was murdered by assassins and decapitated and his head was brought to David in Hebron (II Samuel, Chaps. 3-4). It is interesting to note that the name Eshbaʽal appears in the Bible, and now also in the archaeological record, only during the reign of King David, in the first half of the tenth century BCE. This name was not used later in the First Temple period.The correlation between the biblical tradition and the archaeological finds indicates this was a common name only during that period. The name Bedaʽ is unique and does not occur in ancient inscriptions or in the biblical tradition.”

According to the researchers, the fact that the name Eshbaʽal was incised on a jar suggests that he was an important person. He was apparently the owner of a large agricultural estate and the produce collected there was packed and transported in jars that bore his name. This is clear evidence of social stratification and the creation of an established economic class that occurred at the time of the formation of the Kingdom of Judah.

Garfinkel and Ganor add, “In II Samuel there was apparently reluctance to use the name Eshbaʽal, which was reminiscent of the Canaanite storm god Baʽal, and the original name was therefore changed to Ish-Bashat, but the original name of Eshbaʽal was preserved in the Book of Chronicles. Thus, for example, the name of the warlord Gideon Ben Joash was also changed from Jerrubaal to Jerubesheth.” Khirbet Qeiyafa is identified with the biblical city Shaʽarayim. During several seasons of excavations directed by Prof. Yosef Garfinkel and Saar Ganor, a fortified city, two gates, a palace and storerooms, dwellings and cultic rooms were exposed there. The city dates from the time of David, that is, the late eleventh and early tenth centuries BCE. Unique artifacts that were previously unknown were discovered at the site. For example, in 2008 the world’s earliest Hebrew inscription was uncovered there. Now, another inscription from the same period is being published from the site.

According to Garfinkel and Ganor,”Until about five years ago we knew of no inscriptions dating to the tenth century BCE from the Kingdom of Judah. In recent years four inscriptions have been published: two from Khirbet Qeiyafa, one from Jerusalem and one from Bet Shemesh. This completely changes our understanding of the distribution of writing in the Kingdom of Judah and it is now clear that writing was far more widespread than previously thought. It seems that the organization of the kingdom required a cadre of clerks and writers and their activity is also manifested in the appearance of inscriptions.”

Wow. Incredible history puts us right back where we belong: Rebuilding the Jewish homeland in the footsteps of our biblical heritage. 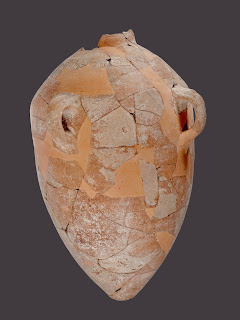 P.S. Travel Israel’s pathways and see stories come to life, with a licensed Israeli tour guide. Write this author for more information, before you take your next trip!