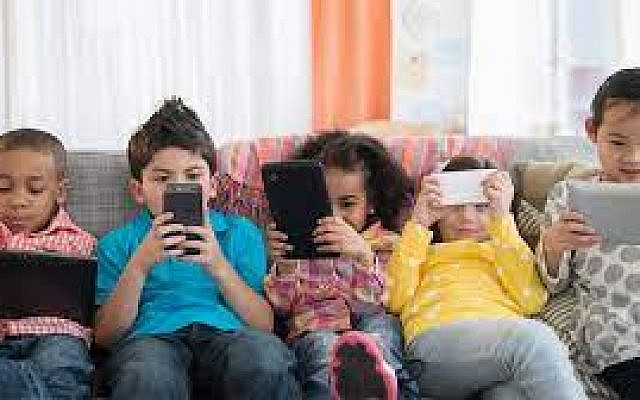 I grew up with TV’s in my home and movie watching. I was certainly not addicted, and my watch time was very organized and structured: every afternoon between 4:00- 4:30, evenings if my parents were out of the house, Saturday night blockbuster, or going to the movies and special occasions. I certainly knew how to play with friends, ride my bike, play outside and play alone. I would set up all my dolls and teddys and be their teacher or take over the living room with 25 barbies and 1 ken- and all their stuff. (Poor Ken!)

As I grew up and started falling in love with Israel, I realized that Israeli kids were always playing outside. In high school, my friends and I might go to the movies or the mall, where my Israeli friends were going on hikes and playing music by a ma’ayan. I wanted my future children to really experience the outside life mentality. Community/Moshav living, parks, the bimba culture and playing in the great outdoors.

When I made Aliyah at age 21, I really hoped my kids one day would resemble those Israeli kids I always saw with dirty sandals, funny-looking hats and water bottles strapped to their sides. When I was married to my ex-husband, my kids rarely watched anything because we were living a “charedei” lifestyle and TV and movies didn’t flow with their education and the community we were raising them in. We separated when my kids were 4 and 8 months and I left the ultra charedei world, but I was still determined not to make the screen a babysitter or a co-parent. It was very very hard but all those years of being a single mom, screen time was only for Friday afternoons (after they did their shabbat chores and showered) and special occasions.

I maintained that until I got remarried in March 2019. Our first year married with 2 boys, aged 9 and 6, was a trip! So ya, we allowed more screen time to bond as a family or just to have mornings to ourselves on days where there was not school. Still limited, but more than what they were used to.

Then 2020 hit. Yes, I made the schedule on the fridge and we did stick to it. Schoolwork time, zoom time, break time, creative time, yoga time and yes, free screen time. It was multi-purposeful in the schedule acting as a bribe, activity, reward, educator, babysitter, coping mechanism, escape and savior. But with time, as the Corona Virus continued to show its presence, way after it was expected to leave, the structure became less, the zoom classes became less important, the quarantine became more and so did the free screen time. This corona thing was just too damn long and hard. Netflix and Brawl Stars became the only salvation or opening towards sanity.

Then one day I woke up, and Corona was starting to fade, and I realized my kids were officially addicted to screens. They would wake up and rush to screens, stay on screens for as long as I would allow it, and had no desire for any normal human connection. I would beg them to play outside, let me read a book to them, play a game or find a friend but their addiction was so intense that the detox of pulling them away was painful for the whole family. I had no energy to fight! (Oh, also, I had a baby in mid-February, so it was not the best time to say no more screens!)

I think a lot of parents out there are feeling this too and we can all relate. In March 2021, the relationship our kids had (have?) with screens is dramatically worse than it was in March 2020. My kids did not want to go outside, play with friends and they did not know how to entertain themselves anymore. They did not care about their toys and Shabbat became so stressful from their withdrawal.

Erev Pesach, I realized screens had become chametz and at Bidekas Chametz my husband and I told our kids that there would be no screens the entire week of Pesach because it had become chametz in our family. They totally understood and agreed, thanked us and we had a beautiful week free of screens.

They screamed at us and got really mad. But when I said they were lucky I wasn’t throwing all the screens in the fire, that helped put it in perspective. I told them they could only watch a 15-minute show on YouTube: Berenstain Bears- Too Much TV.

The week was hard, but we kept super busy going out, making yummy meals, and visiting family. Our Seder ended at 4:30 with treats, costumes and toys everywhere! At the end of the week, we spoke to our boys how screens have become a terrible habit and how we do not like their middot from all their watching and game playing. I think the reboot worked for the most part… although cold turkey creates rebounds. So, there was that! But my son had a playdate today with 2 kids and they played outside for hours- so that’s something to be proud of!

Parents have a new challenge now that corona is (almost) over. There should be no self-blame or even regret because what we just went through was abnormal and it challenged us on a level this world hasn’t seen in generations! Be forgiving to yourself and understand that coping was the biggest priority this year, not less screen time, but now that kids are fully back in school and we are pulling out our lipsticks and beard oils from the back of the drawers, let’s try together to nip it in the bud. My kids know that screen time is back to only Fridays and special exceptions- because it’s post corona and the sunshine is waiting!