The Blogs
Adara Peskin
Apply for a Blog
Please note that the posts on The Blogs are contributed by third parties. The opinions, facts and any media content in them are presented solely by the authors, and neither The Times of Israel nor its partners assume any responsibility for them. Please contact us in case of abuse. In case of abuse,
Report this post.

This is a letter to all my fellow Jewish sisters who are members and supporters of the Women of the Wall.

At this point, I’m really worried that you might think I hate you. I really don’t. I love you. You’re my sister, and I would love to get to know you better.

I realize we don’t know each other very well, and therefore might not be understanding where the other person is coming from and taking things not as they were intended.

So I wanted to rectify that. I’d like to get to know you a little better, and let you get to know me a little better.  I mean, as much as I’ve “been around the block” as they say, my experiences with Judaism have always been within the context of Orthodox practice, whether Modern Orthodox, Chareidi, or somewhere in between. Any time I was something other than Orthodox, I rejected Judaism completely, and felt no need to pursue other streams of Jewish beliefs, like Reform or Conservative. I would like to understand you, my sister, who comes from a different background than myself, who chooses a different way of observing Judaism than myself, what it is exactly that moves you.

When you go to the Kotel, what does it represent to you? What is your connection to the Kotel?

When I go to the Kotel, I feel like I’m right there, talking to God, face to face, like He can hear me clearer and louder than He does in any other place. Shivisi Hashem LiNegdi Tamid– as a Jew, I believe God is directly in front of me all the time, but we do believe that God’s presence is stronger, that our prayers count even more, at the Kotel. That God made the Holy Temple His dwelling, the place where there was even more Presence than there is anywhere else. And that once the Holy Temple was destroyed, God’s presence departed, but stayed specifically at the Western Wall, the place where the Talmud states God’s presence has never left since.

That is why I go to pray there.

When I go to pray at the Kotel, I feel like I’m linking hands with our ancestors who have come to pray at the Western Wall for centuries, or as it is also known, the Wailing Wall, because people would come and pour their eyes out, crying, begging, beseeching God, asking Him to have mercy on them, their loved ones, and all the Jewish nation. People trekked from far and wide, making the long journey to Eretz Yisrael, when it was much more complicated to be able to reach this land than simply hopping on an El Al flight, because they wanted to be able to pray to God in His most Holy place. To pray for the rebuilding of the Bais Hamikdash, so that we have more than just this retaining wall, but the entire Temple, in all its glory.

The fact that for thousands of years Jews have been praying at the Western Wall makes it even more holy, as we believe that constant prayer in a certain place imbues within it the power and sincerity and prayers of all those who came to pray beforehand.

The Kotel is the holiest place Jews can pray nowadays, and the most holy place most Jews will go. The Temple Mount is holier, yes, but it is against the law for a Jew to pray there, and on top of that, many people hold that it is forbidden at all to ascend the Temple Mount because we are all ritually impure today, and many believe that we are thus forbidden from going there in this state of impurity.

So the Kotel is all we have. It is very dear to us, as it was dear to our forefathers. It is very holy for us, for many reasons, it is the place of extra Divine presence, and it symbolizes what we traditional Jews have yearned for ever since the destruction of the second temple- the rebuilding of the third and final temple in Jerusalem.

Dear sister, Women of the Wall member/supporter, what does the Kotel represent to you? Do you feel it has holiness? Do you feel connected to the traditions of our ancestors when you pray here? Does it symbolize your beliefs and dreams as a Jew? I have read the official Reform statement on the Kotel which says:

One should not consider the Western Wall as possessing any sanctity… The approach of the Progressive Jew towards worship and prayer is opposed to any renewal of the Beis HaMikdash, opposed to restoration of sacrificial worship, opposed to granting of any special status to Kohanim, and opposed to any consideration of a Messiah… The Western Wall does not represent Jewish cleaving to God, nor the experience of prayer nor Jewish thought for our times.

I do believe that one person should not claim to speak for another, that everyone has their own thoughts and feelings and beliefs, and that not every member and supporter of WoW is Reform. So I wanted to know from you, my dear Jewish sister- do you agree with the aforementioned? Do you feel/believe the same about the Kotel as having no sanctity? Do you yearn for the renewal of the Beis Hamikdash? Does the Western Wall represent Jewish cleaving to God for you?

Yes, I know that the Reform movement has since updated their stance on the issue.

The movement recognizes the importance of the site to many Jews in Israel and the Diaspora, including the Reform Movement, and also acknowledges the national significance of the site.

I wanted to point out that this isn’t a recanting of the previous statement,  just saying that they acknowledge its importance to many Jews around the world. It doesn’t say anything about the holiness of the place (or lackthereof), about the rebuilding of the Temple, or that it represents anything about a Jew’s cleaving to God.

Just the fact that it acknowledges the importance of the place to many Jews.

I assume that the Kotel is important to you, dear sister, member/supporter of the Women of the Wall.

I would like to know- what does the Kotel represent to you? What is it about it that draws you to this place?

If I’ve understood correctly, what draws many to this place, aside from the holiness, is the Jewish history that it represents. And that is why people say that praying at Robinson’s Arch just doesn’t cut it, because that’s not where, historically, Jews have prayed, and that isn’t the area where Jews have dreamed about returning to, liberating from the Jordanians, etc…

I understand that concern. If Jewish history is important to you, you’d want to pray in the historically accurate area.

I recently learned that, as far as archaeological evidence goes, there is historical proof that Jews have been praying at Robinson’s Arch far longer than they have at the current Kotel plaza- archeological proof showing nearly 2000 years of prayer right there- far longer than there is proof of people praying in the expanse of the wall that is currently the Kotel plaza. 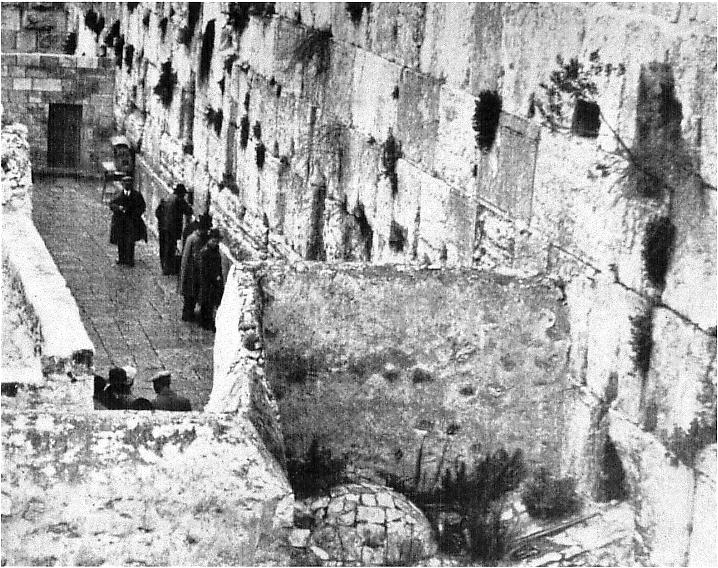 And as for dreaming of going to the Kotel, of liberating the Kotel… as far as the picture in people’s heads, the above picture is what they had in their mind. A little, short, narrow alleyway, with Arab houses just a few feet behind it. Not the Kotel plaza of today. Especially not the Women’s section, which wasn’t historically where people prayed.

I don’t want this letter and the responses to be a competition over who deserves the Kotel more. I sincerely want to understand why it is so important to you. I would really love to hear what the Kotel means to you, as a member or supporter of Women of the Wall, so that way I can get to know you, and understand where you’re coming from, dear sister.

Director, Women For the Wall

P.S. Please leave a comment below, telling me what the Kotel means and represents to you, what draws you to this place.

About the Author
Adara Peskin is a non conformist chareidi feminist single mother of 4 living in Kochav Yaakov, activist for mental health awareness, blogger at PennilessParenting.com about living a life with mindful spending, and foraging instructor, attempting to make a kiddush Hashem every day via her interactions with others.
Related Topics
Related Posts
Comments