The murder of the three Jewish teenagers was the product of a psychotic, systematic Jew-hating death cult, masquerading as nationalism and “resistance.” No leader in the UK, USA or EU speaks out against the Western delegitimization of Israel. None speaks out against the tsunami of anti-Semitism now engulfing the Muslim world and the West. None speaks out against Arab-“Palestinians’” lies and their incitement against Jews and even the USA. They give a free pass to the Arab-“Palestinians” – who therefore know that, as far as the West is concerned, they can kidnap and murder Israeli children and citizens with impunity. 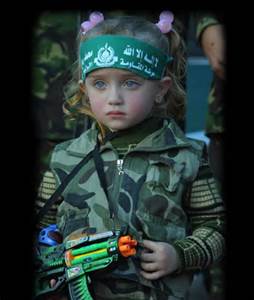 Yet, a greater weapon, while Jews sanctify life, Arab-“Palestinians” glorify death. The asymmetry is lethal. For contrary to the calumny spread by her enemies, Israel’s self-defense is hampered by the moral scrupulousness that instructs its military wherever possible to avoid killing civilians. By infernal contrast, Arab-“Palestinians” deliberately put their own civilians into harm’s way and seek out Jewish civilians to kill, especially the young.

What Jews have always done: In the face of persecution, torture and genocide they choose to live and not to die.

Islamic fanatics do not fear death. They seek it out. We should be finding imaginative ways of doing what really will destroy them: using the weapons of the modernity they so deeply fear to subvert the cult of death that threatens us all.

For one, use the common defense by doing the one thing the Islamic world fears most: reaching out in particular to Arab and Muslim women and young to open their eyes to the truth and freedom and to teach them to love life rather than death. To prove and convince them that this behavior is pathetically wrong and counterproductive for their survival.