Relations between the fast-growing Haredi minority and the rest of Israel are fraught, and a head-on collision may be unavoidable. The situation is quite confusing, but every now and then something springs forth, as if by  hand of God, that focuses the mind.

So it was with this week’s image of the new Israeli government published on the website Bechadrei Haredim (In Haredi Quarters) that blurred out the faces of the nine female ministers (about a third of the total). For many, it reflected a misogyny that cannot be defended and confirmed the worst suspicions about Haredim.

My Facebook feed bristled with disdain and condemnation from Israel and abroad. “Un-f-ing believable! I hate what those religious people are doing with the religion,” wrote one person.” Another celebrated Haredi politicians’ relegation to the opposition, though “they still seem to make their obnoxious presence known.” One commenter compared the Haredim to the Islamic State group (which I strongly rejected, as one certainly should).

“In another 30 years Haredim will be the majority,” one friend lamented – a reference to the fact that the average Haredi woman has over 7 children and the group, currently one in six Jewish Israelis, doubles itself at the astounding clip of every 16 years.

One hardy reader pointed out that Chabad publications do publish images of women. But it should be noted that Bechadrei Haredim is no fringe outlet: it bills itself the largest Haredi site and the SimilarWeb traffic analysis service awards it 6.4 million visits per month and 26 million page views. That’s far more than most sites in Israel and most non-national sites in the United States.

I asked my Haredi friend Heshy Grossman how he felt about the image. Heshy and I have debated the Haredi issue in the past on these pages, and I have found him intelligent and worldly, but distressingly stubborn and indifferent to secular views. He has unapologetically defended everything, including assigned gender roles that see women banished from Haredi political parties but which he views as somehow a sign of great respect.

I was relieved to find him struggling to defend the blurred faces. “I think it is silly for the website to do that,” he said. “If they don’t want to publish a picture as is, they shouldn’t publish it at all.” But he went on to explain that “the non-publication of women’s pictures is not an ideological or Halachic procedure, but simply a market decision” because the Haredi public (especially the Hassidic subgroup) demands it and “the bottom line rules.”

Moreover, Heshy charged that the attention paid to the image was disingenuous because the issue is well known – as in the frequent vandalizing of billboard ads in Jerusalem showing women: “The seculars know Haredi publications have not been showing pictures of women for years, so if someone is making an issue of this non-news story now, it really reflects their own agenda – just another opportunity to make Haredim look bad.”

I , too, sense a glee in having so prominent a site manifest so ghastly a gender attitude in the eyes of decent society. But the agenda of making Haredim look bad did not need much assistance in recent days.

That was accomplished by major Haredi political leaders who staged a quite berserk June 8 news conference in which they agitated against the new government and in particular against the temerity of new Prime Minister Naftali Bennett – who is religious but not Haredi – in allying with the center-left.

Shas Party leader Aryeh Deri charged that the government will “destroy and ruin everything” including Shabbat,  “tear the people of Israel asunder” and throw away “everything that is important to the Jewish people.”

“The names of the wicked shall rot,” said United Torah Judaism leader Moshe Gafni. “There will be a war on all fronts, there will be nothing he can do — this wicked one!”  UTJ’s Yaakov Litzman said that because Bennett now helms “an extreme left-wing government that has lost its way, lost its values and lost its conscience,” he should “take off his kippa.”

That gave rise to internet memes (see photo below) outlining the various religious figures who were not urged to remove the kippa due to implicitly lesser infractions – like ex-President Moshe Katsav who was convicted and jailed for rape, Rabin assassin Yigal Amir, and Deri himself, convicted and jailed two decades ago for corruption. 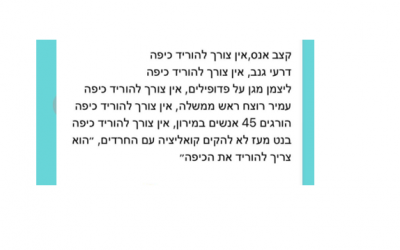 This was part and parcel of an extraordinary display of sore loserhood by the entire departing leadership. Likud “legislators” viciously heckled Bennett’s speech on the day of his swearing in, and Netanyahu has refused to congratulate his successor, perform a proper briefing for him or hold a public handover photo op  (indeed, he and his family remain inexplicably in the prime minister’s residence, as the system waits for them to go through the stages of grief).

But for the entitled Haredi politicians there is an acute interest at stake. They are reasonably concerned about their reduced ability to leverage funding for the Potemkin village of Haredi economy in Israel. Finance Minister Avigdor Liberman, an avowed secularist, may look closely at the vast funding to religious institutions, the gravy train of state-funded jobs for otherwise unemployable apparatchiks, the limitless child payments and other state subsidies.

Conceivably, the government might even do something to address secular anger at the fact that Haredim mostly refuse to teach math, science and English in their schools; that they push men to lifelong religion study expecting to be paid by the state rather than paying tuition; that they generally refuse to serve in the military (while flocking to West Bank settlements and massively supporting the right, thus arguably prolonging conflict); and that they do their best to block secular marriage and impede commerce and public transport on the Sabbath.

That may be too much to hope for from Bennett. But secularist centrist Yair Lapid is slated to replace him in 2023 as part of a rotation, the core curriculum issue does formally appear in the government guidelines, and the Sephardi party Shas may oppose it with less vehemence than its Ashkenazi cohort.

In any case, some time in the future cries for forcing a core curriculum on the Haredim — along with the other points of friction — may become irresistible. That would be great for  secular and Haredi Israelis alike, but bad for the community’s cynical politicians.

If it contributes to a focusing of minds on this train wreck, then the image that caused such a stir this week will have been worth much more than these 1,000 words.