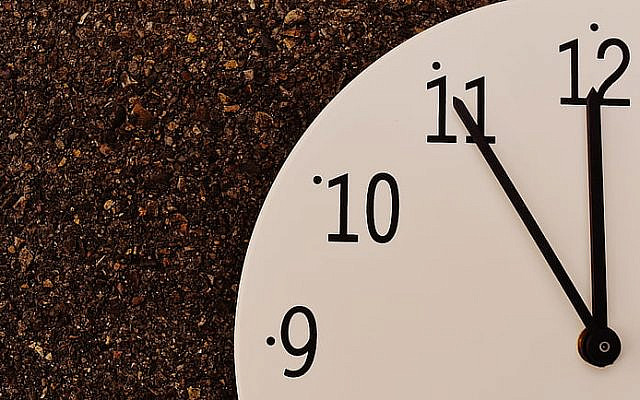 In the first three verses of Deuteronomy the number eleven makes two appearances: “These are the words that Moshe spoke to all Israel… eleven (achad-asar) days from Horeb… in the fortieth year, in the eleventh (ashtei-asar) month…” (Deut. 1:1-3). In this passage there are two different modes of writing the number eleven: achad-asar and ashtei-asar. Truth be told, if we take into account male and female forms of the word, there are a total of four words for “eleven”: achad-asar/achat-esreh and ashtei-asar/ashtei-esreh. All in all, ashtei-asar/ashtei-esreh appears nineteen times throughout the Bible, while achad-asar/achat-esreh appears thirteen times. But what is the difference between these two different ways of expressing the number eleven?

Rabbi Yonah ibn Janach (990-1055) explains that ashtei-asar is a contraction of the words al (“on”) and shtei-asar (“twelve”). He understands that the number which is “on top” of twelve is eleven. Ibn Ezra disagrees with this understanding, as he explains that, au contraire, twelve is “on top” of eleven, not vice versa. Moreover, if Rabbi Yonah’s explanation were true, then one would expect that for male-gendered situations, the number eleven would be ashnei-asar,because the number twelve in such cases is shnei-asar/shneim-asar, not shteim-esreh. Yet, there is no such term as ashnei-asar or shneim-asar; only ashtei-asar and ashtei-esreh — which casts a shadow of doubt over Rabbi Yonah’s innovative proposal.

Instead, Ibn Ezra explains that ashtei of ashtei-asar is a cognate of the word ashtanotav (“his plans”), which appears in Psalms 146:4. He clarifies that just as “plans” are born out of one’s thoughts, so is the number eleven born from the number ten (eser). According to this, ashtei-asar literally means “that which is born out of ten [i.e. eleven].” Ibn Ezra admits that there is a “great secret” behind the connection between ten and eleven, but does not further elaborate.

Peirush HaRokeach offers a somewhat cryptic explanation of the phenomenon at hand. He explains that whenever the number eleven is invoked in a situation where all the preceding numbers are also included, then achad-asar appears. On the other hand, in cases where only the eleventh of a set is spoken about and the others are disregarded, then ashtei-asar is used. I am not quite sure what he means, but perhaps he means to draw a distinction between the ordinal eleventh (ashtei-asar) and the numeral eleven (achad-asar), in the same way the Bible differentiates between the ordinal first (rishon) and the numeral one (echad), or the ordinal fourth (revi’i) and the numeral four (arbah).

In a funerary inscription concerning Niqmaddu, king of Ugarit, archeologists found the word ashtei in Ugaritic to mean “first”. According to linguists, Ugaritic and Hebrew are somewhat similar languages, and both can be classified under the more general category of Semitic languages. It is thus not totally irrelevant that in Ugaritic ashtei means “first”; it fits with our suggestion that ashtei-asar means “eleventh” as opposed to “eleven”. Nevertheless, if we try to apply this approach to all cases in the Bible, it simply does not pan out.

Rabbi Meir Mintzberg (son-in-law of Rabbi Leib Mintzberg, the spiritual leader of the Jerusalemite “Masmidim” movement) points out another interesting factoid: Whenever the number eleven appears in the ordinal form as ashtei-asar (i.e. the eleventh), the Bible omits the definite article prefix ha- from the number (even though for all other numbers, including achat-esreh or achad-asar, it uses that prefix). In explaining the meaning of ashtei, Rabbi Mintzberg explains that the word eshet refers to an overly-distended body (see Rashi to Song of Songs 5:14, Jer. 5:28, Yoma 34b, and Menachot 28a), so ashtei-asar refers to the number eleven as a “bloated ten”. Because ashtei-asar connotes the number eleven as an extension of ten, it is never attached to the definite article; that is, because it has no real significance of its own. By contrast, the words achat-esreh and achad-asar connote eleven as an independent number, not as an extension of ten. This might actually be the intent of Peirush HaRokeach who also differentiated between an independent eleven and dependent eleven.