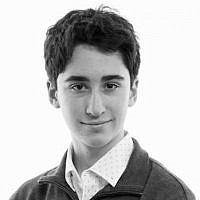 The Blogs
Thomas Ullman
Apply for a Blog
Advertisement
Please note that the posts on The Blogs are contributed by third parties. The opinions, facts and any media content in them are presented solely by the authors, and neither The Times of Israel nor its partners assume any responsibility for them. Please contact us in case of abuse. In case of abuse,
Report this post.

One year ago, Jesse Edberg published an article in The Times of Israel decrying the recognition of non-Orthodox conversions by Israel for the purpose of obtaining citizenship under the Law of Return. This acknowledgement, Edberg argues, threatens the State of Israel and the Jewish nation more broadly due to its willingness to accept an array of Gentiles as Jews. While Edberg recognizes some core problems with the prevailing interpretation of the law, his tract misses the big picture. The Law of Return isn’t inadequate because its standards for conversion aren’t strict enough; it’s inadequate because it recognizes any conversions of individuals unrelated to Jews.

Before delving into the specifics of Edberg’s argument, it is important to define what the Law of Return is to the lay reader. While anyone is eligible for Israeli citizenship if they live in the country for at least three years, the Law of Return provides Jews in particular the ability to be granted citizenship upon their arrival in Israel without wait. This is a concept in international law called the “right of return”, which is a policy afforded by many countries to their diasporas, such as Armenia, Estonia and Ireland. Israel permits three types of people to utilize the rights guaranteed by the law: individuals with at least one Jewish grandparent, the immediate family members of a Jew or Gentiles who have converted to Judaism.

Edberg seems to support this definition, though he pilloried recent relaxations on the third clause of eligibility. His essay discusses the case of an Internet celebrity named Trisha Paytas, a Gentile woman who routinely fetishizes Jewish culture as a means of increasing her clout (as well as attention from her Israeli Jewish partner). She once toyed with the idea of converting to Judaism, which would allow her to instantly acquire Israeli citizenship via the Law of Return. After “taking a break” from her partner, however, she quickly disassociated herself from any sort of Jewish identity, declaring on a podcast that she was “kind of over the Jewish [sic]”. This occurrence isn’t unique, either – other figures have appropriated Jewishness, sometimes explicitly to abuse the right of return. Yegór Ósipov-Gipsh, a Gentile man with a Jewish stepfather, asserted that Israel should welcome anyone who “feel[s] Jewish… no matter how they developed those feelings”. Such attitudes and ideas illustrate a worrying prospect: should someone with no previous connection to a Jewish background be bestowed immediate citizenship by the Jewish state simply because they convert to Judaism? After all, what prevents them from tossing out their Jewishness at a moment’s notice if it is expedient for them, like Paytas did?

In contrast to Paytas and Ósipov-Gipsh, I am an ethnic Jew. My family fled antisemitic violence and sought refuge in the United States, only to be turned away by the country’s foundational institutions on account of their Jewish blood. They were not discriminated against because of their religion – they were secular – but rather because of their lineage. My family’s Jewishness (and by extension, their persecution) wasn’t a choice, unlike Ósipov-Gipsh’s, and it certainly didn’t afford them any popularity as Paytas so ludicrously hypothesized.

One of the primary bases for the existence of the Law of Return is the extrication of Jewry from victimization, and for the past couple of centuries, said victimization has primarily been racially motivated. Coinciding with Jewish emancipation in the 19th century, the antisemite’s depiction of the diaspora Jew shifted; the latter went from being detested as a “heretical Christ-killer” to being feared as a “Semitic interloper”. This acrimony metastasized and crept into popular discourse across the Western world. For instance, during World War Two, Americans saw Jews as “a greater menace to the welfare of the United States” than any other ethnic group, a paranoia that stemmed from irrational fears of an alien “fifth column”. As a result, most major American academic institutions, proprietors and fraternal societies barred Jews from entry to their organizations, using identifying factors such as one’s surname and perceived ethnic characteristics to determine Jewish origin.

This lived experience which binds the Jewish nation together can never be shared by unrelated Gentiles who convert to Judaism. They may observe the tribulations of our people as recorded in our chronicles, but they will not face such afflictions themselves. They will never have to change their family name to secure employment or admission, nor will they have to hide their ethnic features to avoid violence, nor do they harbor the intergenerational trauma of pogroms and genocides. It is this ancestral history of racialized oppression outlined heretofore that prompted the creation of the Law of Return; thus, it should be the possession of this ancestral history that qualifies a person for the right of return.

About the Author
Thomas Ullman is a high school student attending Marin Academy in San Rafael, California. His articles have appeared in publications such as the Foundation for Economic Education and The American Spectator.
Related Topics
Related Posts
Comments