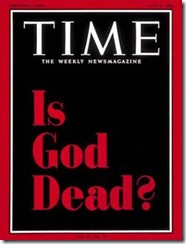 Most of people of my age group, remember the stark red on black cover of Time Magazine, emblazoned: Is God Dead?.

TIME was raked over the coals for this assumed blasphemy. But they could have gone much darker by quoting Friedrich Nietzsche (1844-1900), God is dead. BTW many clergymen should have been thankful that they had sermon material for weeks. I remember the weekly search for relevant derasha material. Here it was on a silver, or red and black, platter.

Even Bob Dylan got into the act. During his return to religion days of the late 70s, he said:

If you were God, how would you like to see that written about yourself?

Funny, I never thought of looking at it from the Deity’s point of view.

Rereading the article after all these years, it’s really quite tame.

The author, TIME religion editor John Elson, really wasn’t that radical. He was really asking the question metaphorically and the true question was: Has God become irrelevant?

Clergyman aren’t that nuanced, and fumed at TIME’s audacity. In reality, it was a relevant question. Science seemed to be replacing religion in many people’s lives. There was a sense in those days, especially after the Salk vaccine against polio, that science had all the answers, not religion.

The rise of the atheistic ideology of Communism was also on people’s minds. The Russian Communists especially mocked religion. The second Russian cosmonaut, Gherman Titov, who circled the globe 17 times, famously said:

Sometimes people are saying that God is out there. I was looking around attentively all day but I didn’t find anybody there. I saw neither angels nor God.

Religion was becoming irrelevant in many people’s lives.

Baby Boomers who were coming of age seemed less religiously connected than the Greatest Generation which preceded us. A lot was going on in the early 60’s to give the impression that religion was on the way out. Science and politics had a lot to do with it, but so did drugs. I’m not sure which drug had the biggest effect of social behavior in the 60’s, but if I had to bet, I’d put my money on the ‘pill’. Readily available contraception changed behavior radically.

As Prof Chaim Waxman put it:

In addition, since the early 1960s there have been some important changes in the larger American culture to which that shift in the pendulum is related, as in the specific renaissance of American Orthodox Judaism, two in particular stand out–the rise of religious consciousness and the rise of public ethnicity are most relevant.  It certainly would have been preposterous to predict in 1965 that there would be a significant rise of religious consciousness in the country. That there would be a dramatic rise in new religions, cults and eastern religions that emphasize mysticism, and that there would be a nationwide rise in church and synagogue attendance several years hence.

In other words, the mid-60’s were experiencing a down swing in religion which was ready to rebound, big time. The TIME article came at the nadir, but, perhaps, helped jump start the upswing.

And, as Prof Waxman described it, the pendulum did swing. In the late 60’s, the expression Born Again Christian became a big phenomenon. Where did this come from? There are many opinions for this return to religion in the late 60’s and early 70’s, but the simplest answer may be the best. Reactions are always to be expected. The counterculture movement toward more lax social behavior wasn’t welcome to everyone. ‘Love, drugs and rock’n and roll’ didn’t work for everyone.

Many people were intimidated by the all the new freedoms, and many were looking for some stability

The famous sociologist and theologian, Peter Berger (1929-2017) wrote in 1968 that organized religion would be gone in the US by the turn of the millennium. However, by 1978 he had changed his mind and was saluting the upswing in religious fervor.

Interestingly, actual church attendance didn’t rebound as much as I would have expected. From a high of around 85% right after the War, US church attendance was dropping to about 70% in the mid 60’s, but only moved up to about 72% in 1970. I was surprised that the growth wasn’t greater, but I think what we were seeing was greater intensity rather than greater numbers.

There were large scale prayer events, and public baptisms became a thing. However, the overall number of those involved didn’t really grow. It’s just that the committed became more vocal and visible.

The loud voices in the early 60’s were liberal and less traditionally religious. By the end of the decade it was a cacophony of noises from both left and right.

As many of the historians and sociologists I’ve talked to have continually reminded me, the Jews in the US of the 60’s were part of those much larger movements. So, probably the number of Jews involved in Orthodoxy didn’t grow that much. However, the intensity of the experience was growing and expanding. Observance was on the rise, but actually numbers associated with Orthodoxy may actually have been shrinking.

These numbers are tricky, because there is a tendency to exaggerate. But in the mid-60’s, just before the upswing in observance, perhaps a quarter of US Jewry were connected to Orthodoxy. Those numbers continually were shrinking from then on. It went down to about 10% by the 80’s, and today stands around 13%. Trying to make sense of these numbers requires a separate post.

Here’s the thing: The late 60’s saw an intensification of religious experience. And magazine covers can be wrong!

Many observers have since gleefully pointed out the demise of Look, while we’re still here.

Remember: periodicals are glimpses of a tiny slice of reality. They reflect a gut feeling at the time of publication.

We Jews are still here and so is God. Because we Jews believe like the Kotzker Rebbe: God is wherever we let God in. America became a good place for inviting God to visit.

Next: Jews as Wheat: The Winnowing