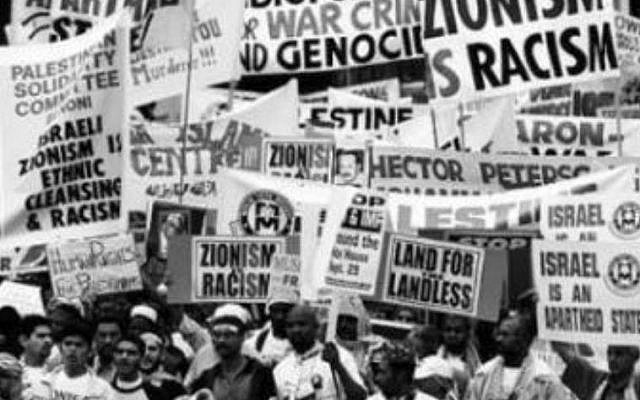 On the side of and inside the United Nations World Conference against Racism, Racial Discrimination, Xenophobia and Related Intolerance met in Durban, South Africa from August 31 to September 8, 2001.

No. Even not if the Jerusalem Post, after five days, copied this idea, without acknowledging the source, from a blogger for the Algemeiner.

It should be clear that when you say: he attacked her because he hates women, you don’t blame the assault on women but on sexism.

The NY Times was right to identify the main motive for September 11 as anti-Semitic. That’s not because the Jews caused it and it’s not even because the US stands by Israel.

Rather, Bin Laden and his ilk believed that Jews are all rich and trade money at fancy economic hubs like the tallest tower in America.

A Bin Laden terrorists declared later that their initial target was a suburb with a high percentage of Jews. It wouldn’t kill enough people so they switched to the Twin Towers, where per their definition many Jews must work. (I couldn’t find the source for this admission anymore.)

The reason why fewer Jews were killed than worked there every day is that it was during the special early morning prayers before the Jewish New Year and many were praying longer and coming to work a bit late. For conspiracy freaks a good reason to “suspect” Jews as perpetrators. It couldn’t be Divine intervention, could it be? (There are no new blood libels. They are all old ones refurbished. Fewer Jews died in the Plague so they must have caused it.)

By the way, the first editions of September 11, 2001, are still filled with global slander against Israel. This was the end of constantly disgracing Israel on all the world’s newspapers’ front pages for weeks – specials from the UN conference at Durban. After that, no one repeated this anymore as everyone got preoccupied with the war against global terror. G^d doesn’t like it when the world slanders the Jews. (But don’t blame G^d. He didn’t speak at Durban and he didn’t fly a plane.)

And too bad if you wanted to blog at this Jerusalem Post. They just emailed me that they won’t except new blog posts anymore. Never mind that they blocked me years ago after four posts without reason and with no recourse to appeal. They call me still six days a week twice daily if I want a subscription. I said it before, I hope they go bankrupt, some person will buy the remains and will rebuild it into a real newspaper again.