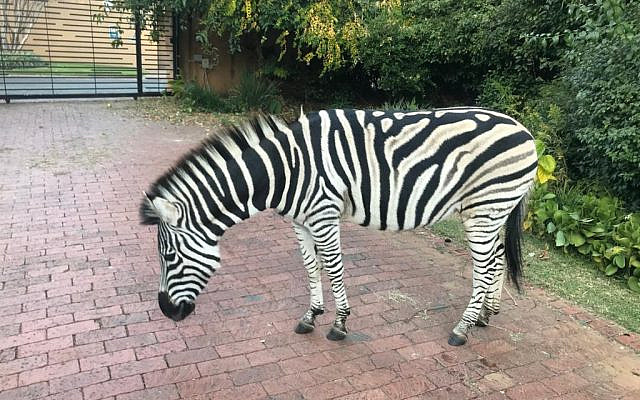 Ziggy-stripes has caused a stir in Johannesburg's suburbia

For many people around the world the lock-down has brought with it zoom meetings, home schooling and to many trips to the fridge. But for the Jews of Johannesburg, South Africa, the lock-down experience now also includes a Zebra.

WhatsApp groups have been buzzing in Johannesburg recently with the sudden arrival of a Zebra in the heart of Johannesburg’s Jewish suburbia. As a concerns mounted about the welfare of the animal, local residents began to question who was responsible for its appearance. The mystery was solved when Dean Gersun, a local doctor and community mohel, revealed that he was part of a plan to rescue the orphaned Zebra. “Ziggy-Stripes”, as the Zebra has now been  renamed, had to be secured from a local farmer who had run out of food for him due to the lock-down.  Ziggy is “sheltering in place” at an empty plot nearby Dean’s home until he has  permission to move to a local reserve.

We caught with Dr Dean about the rescue effort and found out how Ziggy has inspired him to try perform a mitzvah that may never have been done before in South Africa.

You can listen to the interview on the New Blue Review below and find others on 101.9 ChaiFM

You can see the work on the group that Dr Dean works with to rescue the animals http://animalallies.co.za/