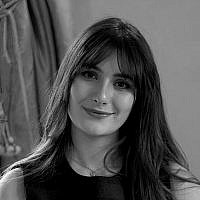 The Blogs
Kelly Alkhouli
Apply for a Blog
Advertisement
Please note that the posts on The Blogs are contributed by third parties. The opinions, facts and any media content in them are presented solely by the authors, and neither The Times of Israel nor its partners assume any responsibility for them. Please contact us in case of abuse. In case of abuse,
Report this post.

While the staggering underperformance of the Russian invasion, coupled with Ukraine’s formidable resistance, have fuelled hopes of victory, Russia has intensified their offensive in the Donbas and are slowly gaining control of the region. Through their strategy of attrition, Russia has destroyed arms depots and key infrastructure all over the country, which means that it is becoming increasingly difficult for arms and fuel to reach the front. The disturbing truth is that Moscow will not back down and may resort to more drastic measures such as increased indiscriminate bombings, full military mobilisation and possible use of weapons of mass destruction.

The Kremlin launched their aggressive invasion of Ukraine in a bid to re-establish Russia as a global power and prevent any further infringement on their claimed-sphere of influence. However, to dismiss Moscow’s invasion as a purely malign imperialist expansion ignores how the events over the past 30 years have fuelled Russian paranoia and contributed to its slow radicalisation.

The collapse of the Soviet Union was a rare opportunity to reset ties with Moscow and increase cooperation in order to achieve a more stable and peaceful world order. Boris Yeltsin’s government, which was dominated by liberals, wasn’t hostile to the West and even introduced drastic economic reforms with the help of influential US political consultants. Unfortunately, the reforms resulted in reckless privatizations in a country where corruption was rampant. As oligarchs emerged and organized crime spread, most of the population struggled to cope with hyperinflation. Russian liberals and American influence were disproportionately blamed for Russia’s increased lawlessness and economic hardship, which was further exacerbated by their 1998 financial crisis. The 1990s was a turbulent decade for Russia that quickly disillusioned a nation thirsty for change and freedom.

For many Russians, Vladimir Putin’s presidency helped stabilize the economy and society, partly due to reforms and largely thanks to rising oil prices. Even though Putin has been in power for over two decades, it is a mistake to assume that the Russian political system is monolithic. Liberals retained significant power during most of Putin’s presidency, but their influence gradually diminished as relations between the West and Russia deteriorated. NATO’s intervention in the 1999 Kosovo war, along with multiple waves of NATO expansion, were deemed by the Siloviki as humiliations epitomizing Russia’s status as a declining power. Whereas the 2003 invasion of Iraq showed that the US could undermine, with impunity, international laws and human rights. US recognition of Kosovo in 2008 and their expanding influence in Georgia and Ukraine cemented Russia’s belief that the US remained an adversary. Following the NATO summit in Bucharest, liberals and nationalists alike made it clear that NATO membership for Ukraine or Georgia represented a red-line. This was particularly the case for Ukraine given their deep historical ties and the strategic importance of the Sevastopol port located in Crimea.

Barack Obama’s attempts at resetting ties with Russia seemed promising until NATO’s intervention in Libya in 2011. Then-President Dmitri Medvedev had agreed for Russia to abstain in the UN Security Council vote authorizing a no-fly zone and armed intervention for humanitarian purposes. NATO clearly exceeded the UN mandate by pushing for regime change, which was seen by Russia as another betrayal. The Libyan conflict generated greater distrust and once again portrayed Russia’s liberals as being naive and weak. Prominent figures like Nikolai Patrushev, Igor Sechin and Sergei Ivanov strengthened their alliance to weaken the liberal faction led by Medvedev and his right-hand man Arkady Dvorkovich.

These past events in no way justify Russia’s illegal invasion of Ukraine, but they have contributed to a rise in Russian chauvinism, which has allowed Putin and other nationalists to exploit these sentiments in order to consolidate power. The west has inadvertently emboldened Russia’s ultra-nationalist hawks and encouraged a slow change of power behind the scenes. Patrushev, who is even more radical and hawkish than Putin, is now the second most powerful man in Russia and his right-hand man, Sergei Vakhrukov, has been tasked with monitoring oligarchs, especially those frustrated by mounting sanctions. It seems highly unlikely that a successful coup will occur in the near future, especially now that Putin’s popularity has increased, thanks to the Kremlin’s propaganda machine. Even if rumors of Putin’s terminal illness turn out to be true, it’s doubtful his successor will be a pacifist.

Most of the Russian population and elites view the conflict in Ukraine as an existential crisis instigated by NATO. Wanting to inflict a humiliating defeat against Russia and reestablish Ukraine’s pre-2014 borders through conventional forces is unrealistic and it prevents us from engaging in diplomatic negotiations. It’s important to remember that diplomacy does not mean capitulation and it does not have to mean appeasement. Appeasement would be to stop supporting Ukraine in hopes that this will pacify Russia. But any political agreement will require concessions on both sides, particularly in regards to neutrality, sanctions, Donbas and Crimea.

Even though a long-lasting peace agreement will involve months of diplomacy, returning to the negotiating table would provide a path to de-escalation and facilitate agreements on humanitarian corridors, ceasefires and safe passage of Ukrainian food exports. A long war is in Russia’s interest and as they gain territory in the east and south, they also gain considerable leverage. Our primary objective should not be to weaken Russia but to protect Ukraine’s sovereignty and population.

About the Author
Kelly Alkhouli is a political consultant and the Director of International Relations at the Center of Political and Foreign Affairs (CPFA).
Related Topics
Related Posts
Comments