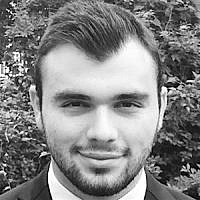 The Blogs
Raphael Benchabbat
Apply for a Blog
Advertisement
Please note that the posts on The Blogs are contributed by third parties. The opinions, facts and any media content in them are presented solely by the authors, and neither The Times of Israel nor its partners assume any responsibility for them. Please contact us in case of abuse. In case of abuse,
Report this post.

As of late the world has been experiencing an influx of terrorism. Every attack is horrible, but recently one attack hit particularly close to home. Ezra Schwartz an 18-year-old American was murdered on his way back from handing out food to soldiers near Alon Shvut when terrorists ambushed the bus he was on. Although I did not know Ezra personally, he attended the same Yeshiva as I did three years ago, Yeshivat Ashreinu, a unique gap year program that combines learning with an assortment of charitable activities.

When the tragic news of his murder reached my circle of friends we were lost for words. The network of fellow alumni lit up with texts and calls between each other about the attack. A number of us attending the same college got together to hear if there were any updates on the situation. When the news finally confirmed the worst, a wave of grief fell upon us. We all felt a tremendous amount of sadness even though most of us never met Ezra. For all of us it was too close to home.

I personally have maintained close ties to the Yeshiva during my army service and found what became for me a supportive family. I wont talk about all the amazing things that the faculty of Ashreinu did for me throughout my time in Israel. What I will say is what we can do now.

The goal of terrorism is to disrupt. To disrupt our daily lives, our routine, our right to happiness, our right to live in peace and harmony. Terrorists attack public places in an attempt to instill within us a sense of fear, to force us to constantly look over our shoulder. To let us know that nowhere is safe. How do we combat such animosity?

Living well is the best revenge. While these people attempt to disrupt our lives we must continue to live life to the fullest. For those of us abroad it means sending more kids on gap year programs, more birthright trips, if you have the means more vacations in Israel. For those living in Israel it means continuing with your daily routine, going to cafes, trips to the beach, visiting the Kotel. If we let terrorism dictate our daily routines they have effectively won. The worst thing that can happen is that we let terrorism become our routine.

While the rest of the world remains silent it is our job to unite as a people. We must show them that no amount of terror can stop us. Instead of adding a flag overlay to your profile picture, do something. Take action, because only through action and unity can we overcome such terror.

About the Author
Raphael Benchabbat served in the IDF as a lone soldier. After his service he returned to New York to pursue a degree in Finance.
Comments