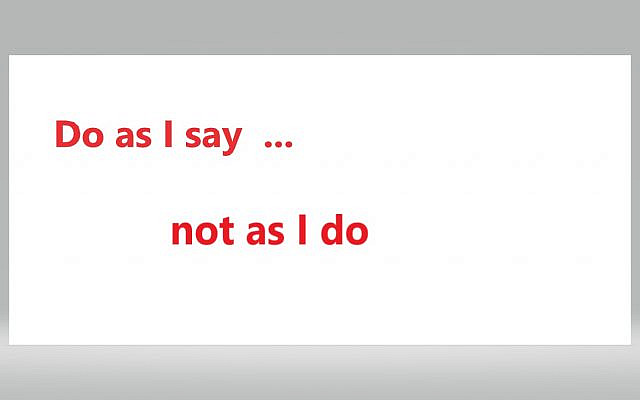 This order, referring to the cynical behaviour of preachers, first appeared in John Selden’s Table-Talk (c. 1654).

John Selden, an English jurist, polymath, and scholar of England’s ancient laws, was also well versed in Jewish law. He would not be surprised to hear the reaction of today’s “preachers” to the coronavirus pandemic.

The law is the law and applies to you but not to me. Yes, I am above the law. I am not like you little people, I am powerful, I am important.

In this time of coronavirus, we are seeing just how divided our society has become. Long gone are the early days of the state, if they ever existed, when we all were penniless, all wore the same old clothes, all made do with the occasional trip to the beach instead of flying off to exotic destinations.

The virus has exposed the inequalities. While we, the people, are urged, if not commanded, to put all social activities on hold and to obey the rules, President Trump demonstratively removes his mask on his return to the White House from a short stay in a military hospital, potentially endangering all around him. We have seen similar disregard for the safety of others among our own politicians and public figures.

It should, of course, be quite the opposite. The virus makes no distinctions, it doesn’t check our bank account or how many “likes” our blogs receive. It kills without fear or favor.

It was Adolph Ochs, after acquiring The New York Times in 1896, who promised his readers that he would “give the news impartially, without fear or favor, regardless of party, sect, or interest involved.”

In fact, the coronavirus, while having no fear, is definitely showing signs of favouritism. It favours the obese, the elderly and the sick. But mostly it favours the foolish. From the Haredi ultra-orthodox, told by their rabbis that the virus can be beaten by Torah study, to the young part-goers, telling themselves that they will live forever, the virus finds easy pickings.

And, while the virus cannot avoid favouritism, neither can today’s New York Times.

Ignoring Adolph Ochs’ promise, in both its editorials and its news reports there is a strong bias against Israel. It does not use crude and obvious propaganda but subtly presents Israel as responsible for many of the region’s problems. It uses double standards in its reports about Israel as compared to her enemies, often telling only half the story.

We may soon see a vaccine to save us from the coronavirus but it will be a long time before there is a vaccine for the anti-Israel virus.