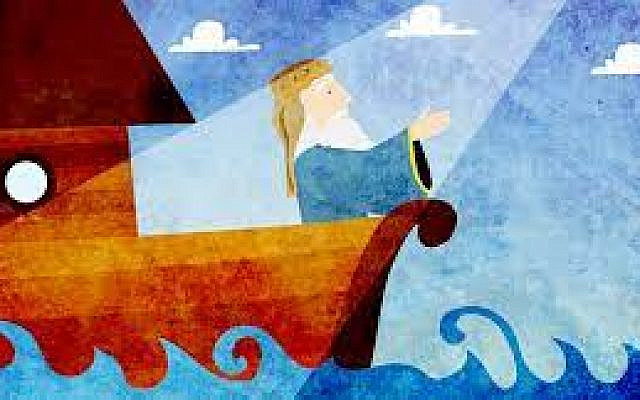 Just before God brings the flood, the beginning of Genesis says, “God saw that man’s wickedness on Earth was increasing, and every thought which came from his heart throughout the day was purely evil. God was consoled [by the fact] that He had made man upon the Earth [and not in heaven, where he would have caused the angels to rebel]. God decided in His heart [to cause man] pain.”

Rashi, the foremost commentator on the Bible, writes the following “as an answer for heretics: A non-believer asked Rabbi Joshua, the son of Korcha, ‘Do you believe God knows the future? Why, then, does it say God had a change of heart?’ Said Rabbi Joshua, ‘Have you ever had a male child? And what did you do when he was born? (Did you not celebrate?) Didn’t you know one day he would die?’ And the non-believer answered, ‘In happy times happiness, and in mournful times I mourn.’

Rabbi Joshua said, ‘The same is with God. Even though He knows they would sin and be destroyed, He did not withhold from creating them, [especially] for the righteous ones that would be born from amongst them.”

Rashi explains in the beginning of Genesis: “Why does the Bible (which is intended to direct and instruct the world how to conduct oneself in a Godly manner) begin with the story of the creation of the world and not with the commandments? Because there is an important message, God wants to communicate. If any nation of the world decides to accuse the Israelites of stealing the Land of Israel, they could answer that God owns and is the ruler of the entire universe He created. He gives the land to whom He desires. First, He allowed others to dwell over there, and then He “preferred” to give it to us.”

The same principle can be applied to our discussion. Did God have a change of heart when he decided to bring the flood and do it differently than when he first created the world? The answer is no. There is no remorse, no change of mind or heart. God doesn’t change and always is what He is.

In the same way that God first placed other nations in Israel and then decided to give it to the Israelites — not because of any lack of vision on God’s part or a change of heart — the flood was not any change of heart, but it is all part of the plan God already had in mind when he created the universe.

Regarding the supposed change of heart with the flood, Rashi writes that his explanation is directed to a heretic, an obstinate non-believer. As far as someone sincerely seeking answers to make of the world whatever sense he can, he understands and/or accepts there is no contradiction between the knowledge of God and a person’s capacity for free choice. He knows a human being cannot understand everything, especially not God Almighty’s ways. It is only for the non-believer, who is intractably stuck, that Rashi tells the story of Rabbi Joshua, hoping this would help them better relate to the concept of what appears to be a change in God’s mind.

A person will celebrate the birth of a child even though everyone knows the child must die one day. He understands that God bestows true everlasting good for virtuous people even if there may be a change of course in the future.

Rabbi Joshua is mentioned intentionally by Rashi since he was renowned for his ability to deal with such persistently stubborn people. He had the strength and the knowledge. Regular people, however, would be advised to be on guard and avoid debates with negative people since staying around negative vibes has a way of influencing those in that aura.