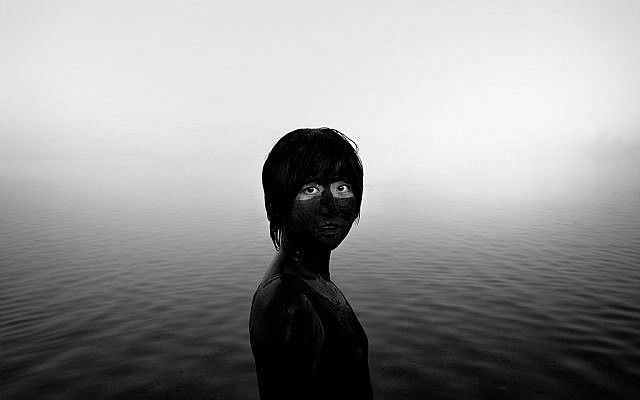 Photographer Alex Bronfer generously provided the illustration from his series Floating for this blog. See his work at http://www.bronfer.com/

“My own immediate health concerns are currently overshadowing my concerns for global warming and international economic distortion.”

“I guess you are aware of it already, but you will not only lose the hair on your head,” a good friend warned me.

I was well aware of the fact, and between the lines, I understood that it was not exactly the information he wanted to convey to me. Admittedly, we were both amused and delighted that I would now be able to save myself the expensive wax and laser treatments removing inconvenient hair on various places of the body that many women pay for extensively.

His real concern was something else:

“It means you will also lose your eyebrows, and a face without eyebrows looks really strange. You know it is the eyebrows that creates the persona,” my worried friend said and made me understand that he was genuinely concerned that I was now about to lose my facial and personal characteristics.

True – I had not even thought about my eyebrows. Maybe because I am a mascara girl. Ever since I was 15 or 16 years old, I never walked out the door without mascara.

Actually, it is the only type of makeup, I have ever been able to figure out how to use.

I have often wondered how young women dig into their giant makeup bags and pull out one product after another to smear on their otherwise beautiful and youthfully hydrated facial skin. Layer by layer. The foundation, the primer, the concealer, the basic, the finish or whatever it is all called. I do not get it. I just find it incredible how the makeup industry can convince 16-, 17- and 18-year-old natural beauties that they need to buy and use all of it.

However, after talking with my worried friend, I was nevertheless happy to have observed several of these seemingly mandatory hour-long makeup sessions by younger female friends and relatives preparing themselves for leaving the house and being tourists for the day.

Without them, I would not have known that particularly eyebrows are in focus this year.

It is far from enough to have eyebrows. They must be sculptured and shaped accordingly.

That is why I sat for hours yesterday watching instructional videos on eyebrow painting on YouTube.

When I finally felt educated, I shifted my attention to eBay to buy some of the many products that can help me preserve my face.

I decided on a set of eyebrow stencils that allow you to make 12 different eyebrow shapes. They are – of course – from China and are held in place over the bridge of the nose with an elastic band around the neck.

I also chose two different kinds of eyebrow paint. One is a pen with four small felt heads that will obviously be able to paint thin parallel lines to resemble eyebrow hair. The other is a makeup color pen to fill the stencil when I have chosen an eyebrow shape I like.

I am sure I will not be able to figure it out. So I chose the cheapest ones I could get while thinking that it is still entirely inconceivable that you can buy anything for under a dollar and have it shipped for free halfway around the world.

In fact, this should worry us far more than anything should.

But my own immediate health concerns are currently overshadowing my concerns for global warming and international economic distortion.

Furthermore, my good friend’s concern for my eyebrows and the possible lack of the character of my face has given rise to a new concern.

For what does a mascara girl really do when also her lashes are shed?

I hope I can figure out how to paint the eyebrows. I also imagine that, as compensation for the mascara, I will engage a bright-colored lipstick. Since I promise, artificial glue-on lashes are entirely out of the question.

This is my seventh blog and the seventh chapter of my book The Lights Within, read more about the book and buy it at http://www.hannefoighel.com  Anyone buying the book now will receive it as a PDF, while the physical book will arrive post-corona.