Don Rickles, the virtuoso of venom, loved to insult his celebrity friends, the biggest names of his era, like Milton Berle, Bob Hope, Johnny Carson, Orson Welles, and Ernest Borgnine to whom he said, “Look at your face! Anyone else hurt in the accident?”

The acid-tongued comic admonished his nightclub audience: “I’m really disappointed. You didn’t give me the standing ovation I deserved. My maid gets more applause when she dusts the piano keys.” 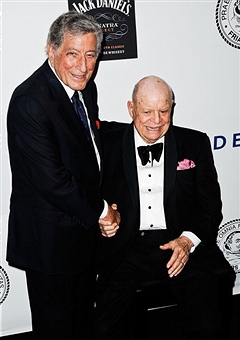 Frank Sinatra, one of Don’s closest friends, remarked, “I like Don Rickles. I have no taste. That’s why I like him.”

When I first met Rickles he came at me not with insults but with a knife. It was in the early 60s when I discovered Dick Gregory and launched him to overnight fame at the Chicago Playboy Club. When we got to Los Angeles, we dropped into the tony Crescendo Club where the famous insult comic was headlining.

They seated us ringside. The legendary insult comic stopped the show and introduced Dick Gregory as a brilliant rising star in the comedy orbit. He glared at me, this strange press agent nursing a glass of milk. (Milk? Yes, even in a nightclub, of all places, as I never cared for the hard stuff. And I didn’t have the decency to fake it and order seltzer.)

Rickles bolted from the stage and barged into the kitchen. He came out with a menacing grin, waving a butcher knife, and chased me between the tables right out of the club onto Sunset Blvd.

The last time I saw Mr. Warmth, as he was affectionally called, was in 2013 when the Friars honored him with a lifetime achievement award at a dinner at the Waldorf Astoria. The ballroom was bursting with big ticket talent. There was Bob Newhart, Joan Rivers, Freddie Roman, Tony Bennett, Lewis Black, Robert De Niro, Regis Philbin, Robert Klein and many others who came not only to pay tribute to the legendary entertainer but be a target for his sharp barbs. It was an honor to be insulted by Rickles.

At the dinner, Newhart recalled a trip to Israel with Rickles. They stayed at the King David Hotel and drove around Jerusalem. Rickles was so excited, pointing out all the sites.

“I know that building,” Rickles said. “It’s where they put all the Palestinian terrorists.” No, he was told that’s the Israel National Library. On the Golan Heights, Rickles saw some high poles. “Those high poles can spy on the troops in Syria,” he said. No, Don, they’re telephone poles.

The Merchant of Venom (as Milton Berle called him) was born Donald Jay Rickles on May 8, 1926, in the Jackson Heights neighborhood of Queens, New York. He died of kidney failure at age 90 on April 6, 2017, at his home in Beverly Hills, Calif.

Tim Boxer was a columnist at the New York Post for two decades. At the same time, he has been a columnist for the New York Jewish Week for 37 years and editor of 15MinutesMagazine.com for 18 years. He is the author of Jewish Celebrity Hall of Fame, interviews of Hollywood stars about their Jewish roots.