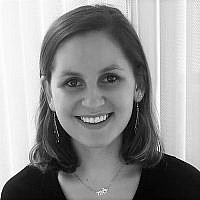 The Blogs
Leah Susman
Apply for a Blog
Please note that the posts on The Blogs are contributed by third parties. The opinions, facts and any media content in them are presented solely by the authors, and neither The Times of Israel nor its partners assume any responsibility for them. Please contact us in case of abuse. In case of abuse,
Report this post.

Earlier this month, the Republican party in Israel opened four offices in Israeli settlements in the West Bank. Their goal? To register 200,000 Israeli-American settlers to vote for Donald Trump in the upcoming election.

Every US administration since president Johnson has regarded Israeli settlements as illegitimate or illegal because they threaten a two-state solution, which subsequently threatens Israel’s future as a Jewish and democratic state. Donald Trump’s GOP regularly lauds Israel as “the only democracy in the Middle East,” while simultaneously embracing the settlements. They simply can’t have it both ways.

The GOP’s foreign policy platform dropped language surrounding a two-state solution in July, despite years of bipartisan support for an independent Palestinian state. This shift reportedly stemmed from Trump’s influence and the intimate involvement of his primary Israel aides, David Friedman and Jason Greenblatt. Friedman is the president of an American organization that funds the West Bank settlement of Bet El and Greenblatt is a lawyer whose firsthand experience with the Israeli-Palestinian conflict comes from performing guard duty at a Jewish settlement during his time as a yeshiva student.

In July, Friedman noted his candidate’s ambivalence towards a two-state solution, saying that “the two-state solution might be one answer, but I don’t think it’s the only answer.” Rabbi Rick Jacobs, president of the Union for Reform Judaism, the largest denomination of Judaism in the North America, responded to these statements in a letter to Trump and Friedman, asking for clarification regarding their stance on a two-state solution. Friedman responded with clear opposition to a two-state solution — in line with the GOP’s exclusion of all mention of it from their platform.

We have to recognize just how reckless and dangerous policy shift is. Abandoning the two-state solution jeopardizes the future of Israel as both a Jewish and democratic state – and dooms the country to never-ending conflict with the Palestinians. Even Prime Minister Netanyahu has noted that a binational state would be disastrous for Israel. Yet Trump is effectively giving the Israeli right the green light to move ahead with their plans to annex the West Bank and reject all thoughts of peace or compromise.

Evidence that a President Trump would embrace the settlement movement continues to grow. Earlier this month, Prime Minister Netanyahu released a video in which he said that support for the removal of Israeli settlements, as part of a two-state solution is equivalent to the “ethnic cleansing” of Jews. In a press conference earlier shortly after, State Department spokesperson Elizabeth Trudeau mentioned that this type of language is unhelpful and inappropriate, reiterating support for a two-state solution and opposition to settlement expansion as an obstacle to peace. In response, David Friedman said that the Obama administration should be ashamed of their misguided reaction and that their opposition to Netanyahu’s comments was ”racist and anti-Semitic.”

Should Trump become president, his track record indicates that he’s far more likely to empower extremist ideas and policies than to encourage any progress toward peace in Israel and the territories for at least the next four years. Without progress toward a two-state solution, Israel will find itself farther down the path of international isolation and permanent conflict. The situation won’t simply stay the same — it’s likely to deteriorate, making life even more dangerous and difficult for Israelis and Palestinians.

The disastrous effects of a Donald Trump presidency would not be restricted solely to our own country, but would have impact in Israel, the Middle East and around the world. Trump and the GOP’s support for pro-settlement policies threaten Israel’s future as a Jewish and democratic state.  As American supporters of a peaceful and prosperous future for Israel, we have a responsibility to do everything that we can to oppose him.