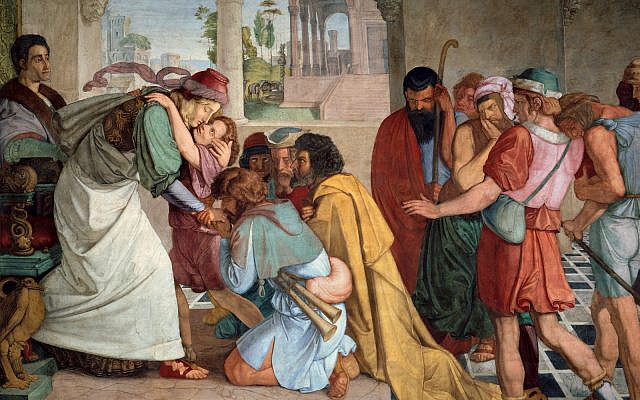 Psychologists and those offering religious guidance will often talk about learning to forgive those who have hurt us even if they have never—and will never—apologize. It is possible, however, to be too quick to issue that forgiveness. There are costs in rushing to forgive others. Some of us need to learn not how to forgive, but instead how to wait until an apology is offered.

Joseph is one of those people. When he reveals himself to his brothers, he forgives them immediately: “Now, therefore, to not be not grieved, nor angry with yourselves, that you sold me here, for God sent me before you to preserve life” (Gen. 45:5). No harm, no foul! You didn’t do anything wrong—it was all for the good. And anyway, you didn’t even do it—it was all God’s doing. So don’t worry about it. I forgive you. There’s nothing, even, to forgive.

An apology does a few things. For the person saying sorry, an apology says that you recognize that there is a rule of law, and it reaffirms that rule of law. It communicates to the injured party, and to oneself, that while the person who is apologizing acted badly, she knows that this is not the way she is supposed to act.

An apology can also bring about healing. It surfaces the issue that is painful and difficult to talk about, an issue that has been festering beneath the surface. Sometimes this healing comes through calm and reasoned discussion about how to correct what was done and how to best move forward. Just as often, it comes about through opening a space for emotions to come forth. The injured party can express how she has been hurt and is even still hurting. She can vent and let forth the emotions that have been simmering and boiling within herself. The offender, similarly, can give release to the guilt that he has been carrying around all this time. By owning up to what he did and talking about, allows for an unburdening, for catharsis.

An apology creates an opening for healing. Joseph’s over-hasty forgiveness was a band-aid. The wound, unhealed, remained open and festering underneath.

Why do some people rush to forgive? Some do so to avoid the discomfort that comes from revisiting the painful past. This might be about more than avoiding pain. Looking back at what happened, acknowledging that there has been real hurt, forces the injured party to also consider whether their actions were so pure. What part did they play in the dynamics? How did they react when this was done to them?

By not acknowledging the wrong that had been done to him and how he had suffered, Joseph was able to gloss over his own behavior. His tricking, accusing, and manipulating of his brothers in his role as viceroy was, undoubtedly in his mind, acting in the service of his dreams, of God’s will. Had he spoken with his brothers about how they had pained him, he might have had to consider that the way he acted might not have been so pure. Joseph might have been prodded, at least subconsciously, by a desire for revenge. A quick forgiveness saved him from all of that anguish and discomfort.

Others forgive quickly because they wish to avoid being placed in such a position of power to grant or not grant forgiveness, and they wish to avoid seeing the other person putting himself in such a position of need and powerlessness. The irony is that, without an apology, the power dynamic remains unacknowledged and very much in place. If I have forgiven you without any catharsis, healing, or acceptance of responsibility on your part, then by the same grace that I have offered you this forgiveness, I can revoke it as well.

The story of Joseph and his brothers and the harm that they did to him does not end with Joseph’s forgiveness. At the end of next week’s parsha, we read that after Jacob died, the brothers were terrified about how Joseph would now act. “Joseph will now hate us, and will certainly revisit upon us all the evil which we did to him” (Gen. 50:15). Joseph’s over-hasty forgiveness—“it was not evil, it was good; it was not you, it was God”—made no impression on the brothers. In their minds, they thought: Joseph will now repay us for all “the evil” which “we” did unto him. Because there was no apology, Joseph’s power over them was ever-present, and now they had to abjectly throw themselves to his feet. With no apology, there was no healing.

When asked for forgiveness, we should give it freely. But not too quickly. Let’s make sure that we create the space to allow apologies to happen.