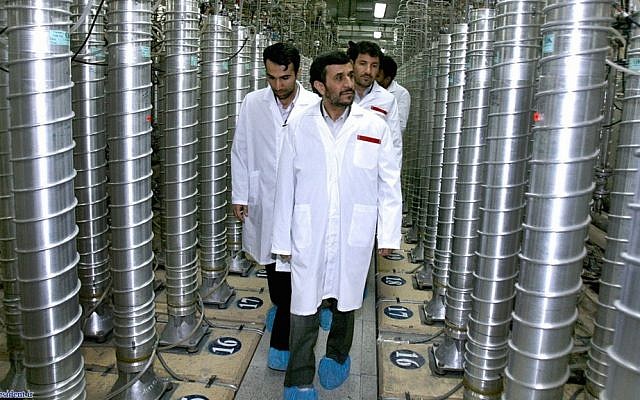 Iran continues to deny having any nuclear military ambitions.

With the world’s attention focused on Coronavirus, there is another crisis developing that deserves immediate attention. Iran’s nuclear program is once again progressing toward a danger point called “breakout”, the time it would take a nation to develop enough highly enriched uranium for one nuclear weapon. And once again, Iran is shrinking its nuclear breakout timeline.Ignoring this threat is an invitation to disaster.

Although a nuclear weapons program can seem complicated, there are some fundamental concepts that make the discussion accessible for those of us who are not nuclear physicists.

Ten years ago, David Ibsen, the Executive Director of the non-partisan advocacy group United Against Nuclear Iran (UANI), gave a talk in which he provided a framework for understanding this very complex subject. His explanation is as relevant today as it was then.

Since the 1990’s, Iran has been working on all three elements of its nuclear weapons program.

The main path that Iran chose to create fissile material for nuclear weapons was through the enrichment of uranium in the gas centrifuges seen in the picture above. The goal was to achieve “breakout” by producing enough highly enriched uranium – or weapons grade uranium (WGU) – for nuclear weapons.

Developing weapons grade uranium as fissile material for a nuclear weapon is a violation of Iran’s treaty obligations to the international community. Iran is a signatory of the Non-Proliferation Treaty (NPT) that allows nations to develop nuclear power for peaceful purposes. In return, Iran is required to declare all nuclear related activities to the International Atomic Energy Agency (IAEA).

In 2002, Iran was caught hiding the development of an uranium enrichment facility at a place called Natanz. As a result, in 2006 the U.N. Security Council issued the first of six resolutions that required Iran to cease all uranium enrichment activities. Yet, Iran continued to enrich uranium in total defiance of the international community.

Iran had always claimed that their nuclear program was for peaceful purposes. In 2018, that claim was proven to be a total lie.

In January 2018, a daring operation by the Mossad, Israel’s intelligence agency, confiscated Iran’s nuclear archives hidden in a warehouse in the heart of Tehran. The content of these archives proved beyond a shadow of a doubt that in spite of years of denial, Iran never had peaceful intentions for its nuclear program.

In a 2019 article in The Hill that assessed the implications of the Iran nuclear archives, authors David Albright and Olli Heinonen wrote, “The documents show that Iran’s atomic ambitions were much further along than previously known. Most worrisome, breakout time for a missile-deliverable nuclear warhead was much shorter than U.S. officials thought likely”.

It is important to note the expertise and credibility of the two authors of this article. David Albright is a physicist and founder and President of the non-profit Institute for Science and International Security in Washington. Olli Heinonen is former deputy director general of the International Atomic Energy Agency (IAEA).

In order to understand where we are today in regard to Iran’s breakout capacity, it’s helpful to look at a brief history of Iran’s nuclear program over the past decade.

By 2010, it became obvious that the U.N Security Council Resolutions that called on Iran to cease all uranium enrichment activities were ineffective. Stronger economic sanctions were needed. At that point, the U.S. Congress and the Obama administration enacted powerful bi-partisan economic sanctions legislation.

In addition, United Against Nuclear Iran (UANI) worked to promote the economic isolation of Iran by highlighting the international companies doing business in Iran and promoting divestment legislation in state governments across the U.S.

The combined impact all of these efforts helped to create the tremendous economic pressure that forced the Iranian leadership to come to the negotiating table to discuss the future of its nuclear program.

In 2013, negotiations began between Iran and the five permanent members of the U.N. Security Council plus Germany (the P-5 plus 1). The negotiations headed by U.S. Secretary of State John Kerry finally brought about the Iran nuclear deal of 2015, formally known as the Joint Comprehensive Plan of Action (JCPOA).

One accomplishment of the JCPOA was a limitation on Iran’s nuclear program specifically regarding the number and quality of centrifuges in use for the enrichment of uranium. The deal also limited the amount of enriched uranium that Iran could stockpile.

Those limitations reduced Iran’s breakout time to develop highly enriched uranium to about one year. Unfortunately, the limitations embedded in the JCPOA had an expiration date, a deadly flaw of the deal.

According to the JCPOA, between years 10 and 15 of the deal, the restrictions on Iran’s uranium enrichment activity would have been eliminated in what were commonly referred to as the “sunset clauses” of the deal.

After 15 years, Iran would have been free to build as many centrifuges as it wants and enrich as much uranium as it wants, including at higher levels of purity closer to weapons grade uranium.

Because of the sunset clauses in the JCPOA, by 2030 Iran’s breakout capacity could have shrunk from one year back to a period of days.

After 2030, Iran’s uranium enrichment program could have become so large and advanced that if Iran decided to achieve breakout and build nuclear weapons, no amount of international inspectors would be able to detect and provide adequate warning to prevent that from happening.

These and other problems with the JCPOA were among the key factors that convinced the Trump administration to leave the Iran nuclear deal in May 2018.

The Trump administration was also concerned with issues not covered by the JCPOA including Iran’s ongoing support for terrorist organizations like Hezbollah and Hamas, Iran’s support for the brutal Syrian regime, and its continuing development of ballistic missiles.

So where are we today in regard to Iran’s breakout capacity?

After leaving the JCPOA, the Trump administration renewed economic sanctions in order to force Iran to renegotiate the nuclear deal and address its flaws. The renewal of U.S. economic sanctions- combined with the impact of Coronavirus- is definitely taking a heavy toll on Iran’s economy.

In the meantime, Iran has begun to intentionally violate the terms of the JCPOA and enrich uranium at levels far beyond the limitations of the nuclear deal. According to a report published on April 21st by the Institute for Science and International Security headed by David Albright, Iran’s breakout timeline had shrunk to 3.8 months.

On June 8th, the institute issued a new report that says, “Breakout timelines decreased slightly from the last reporting period to an average of 3.5 months, with a minimum of at least 3.1 months. These values reflect greater certainty that Iran possesses sufficient enriched uranium to make enough weapons grade uranium (WGU) for a nuclear weapon”.

It is time for the international community to refocus attention on Iran’s uranium enrichment program and demand that Iran return to the negotiating table. For its part, United Against Nuclear Iran (UANI) has outlined the flaws of the Iran nuclear deal that could be fixed through renewed negotiations.

The demands on Iran are not extreme by any measure. As U.S. Secretary of State Pompeo has said on many occasions, “We want Iran to simply behave like a normal nation”.

Ignoring the potential dangers from Iran, while its leaders threaten the destruction of Israel and it continues to sponsor terrorism, is an invitation to disaster. Iran needs to know that the world is ready to join the United States in re-imposing broad economic sanctions that will prevent Iran from achieving breakout and the development of nuclear weapons.