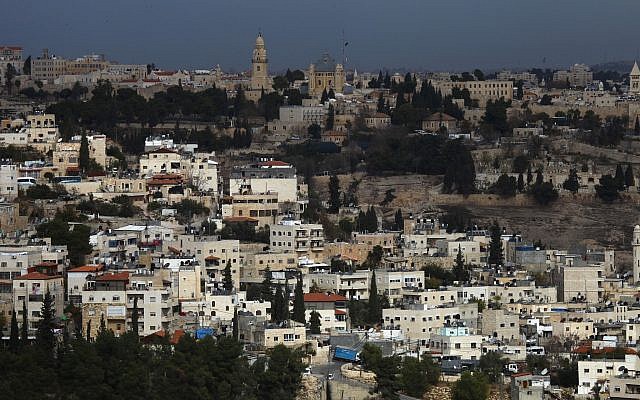 The heated discussions over the meaning of the assassination of Yitzhak Rabin and the 100th anniversary of the Balfour Declaration have dominated the media just as moves to entirely alter the status of Jerusalem and its environs have quietly proceeded apace. Two interrelated bills (The Basic Law: Jerusalem, the Capital of Israel [Amendment Number 2] and the Jerusalem and Its Daughters Bill — dubbed the Greater Jerusalem Bill), if adopted, will fundamentally redraw the contours of the city and the composition of its inhabitants in Israel’s 70th year. Together, they will create a massive Jerusalem metropolis under Israeli sovereignty, transform the character of the city, further bifurcate the West Bank, and sound the death knell for any possibility of an Israeli-Palestinian accord. No move Israel has made since 1967 has greater implications for the future of the area than that being quietly promoted at this time.

Jerusalem has traditionally stood at the center of violent confrontations for control, as well as at the heart of collective hopes for peace and harmony. In the present era, it has become both a microcosm of the ongoing Israeli-Arab conflict and also — because of its unique confluence as a meeting point of people, nationalities, religions, cultures and aspirations — a receptacle of prospects for intercommunal sharing and reconciliation. Any unilateral change in the geographical or human demarcation of the city will have broad — and potentially disastrous — implications for all those who treasure this city.

The aim of the two bills currently under consideration, along with the recent approval of Jewish construction in the heart of Palestinian neighborhoods (such as Sheikh Jarrah, Ras al-Amud and Jabel Mukaber), is clear: to expand the area of Israeli control over Jerusalem and to substantially alter its human makeup. The first legislative initiative — one that hastily passed a first reading this past July — is the amendment to the Basic Law: Jerusalem the Capital of Israel. Introduced by Minister for Jerusalem Affairs Ze’ev Elkin and Minister of Education Naftali Bennett, the proposal prohibits the transfer of any area currently within the municipal borders of Jerusalem (including neighborhoods beyond the separation barrier) to any foreign entity, and sets a barrier of a super-majority of the Knesset (80 members) for any future change. The real significance of the bill, however, lies in what is not explicitly stated: the granting of the right to make “municipal adjustments” to the shape of the city — thus paving the way for additions and detractions to its present boundaries.

This is precisely what the Greater Jerusalem Bill, a private member’s proposal introduced by a group of coalition members headed by the Likud’s Yoav Kish, sets out to do. It seeks to incorporate municipal areas around Jerusalem — many of them in the West Bank — as autonomous sub-municipalities (“daughters”) of the city. At the same time, it would physically detach heavily populated Palestinian parts of the city that are beyond the wall, but still within the boundaries of the city annexed in 1967 (thus establishing a separate, Palestinian, category of sub-municipalities whose inhabitants are stripped of their rights as residents of the city). A preliminary reading of this bill — heavily backed by representatives of all parties in the coalition — is currently pending government approval.

Together, these two legislative initiatives are effectively acts of Israeli annexation in a dual sense. Geographically, they will extend the reaches of Jerusalem to include the major settlement blocks around the city, such as Ma’ale Adumim (including the E-1 enclave), Beitar Ilit, Givat Ze’ev, Efrat and Gush Etzion, and give their residents the right to participate in Jerusalem municipal elections, while maintaining their local autonomy. Simultaneously, areas of East Jerusalem (the Shu’afat refugee camp, Anata, Kufer Aqab and possibly Wallaje to the north, east and south of the city) will be excised from Jerusalem proper and granted sub-municipality status as determined by the Israeli government.

Demographically, the current balance between Jews and Palestinians will be totally reset. The close to 900,000 residents of Jerusalem in its present demarcation consist of 37% (323,700) Arabs and 63% (about 570,000) Jews and “others” (mostly Christian). To counter the rise of over 10% in the percentage of Palestinians in the city since 1967, the two bills would add some 120,000 Jews to Jerusalem, while extracting over 140,000 Palestinians — fundamentally transforming its human face.

The combined effect of these two acts would be incorporating new territories into Jerusalem (a twofold increase in the size of its territory) in the name of Jewish inclusion and transferring existing Palestinian residents from the city in the name of ethnic exclusion. But while the area under Israeli control will grow, Israel’s assertion of sovereignty may not be enhanced, despite efforts to consolidate its rule within the redrawn boundaries — especially through infrastructural improvements in East Jerusalem. The separation of Palestinian neighborhoods from Jerusalem creates a fiction for Israel of sovereignty without responsibility. The addition of new Jewish sub-municipalities to the city suggests that people may determine policies without having to live with their consequences (a bizarre notion of sovereignty if ever there was one).

It is difficult to exaggerate the negative ramifications of these one-sided moves for Israel, for the Palestinians, for Jerusalem and for the lives of its inhabitants. On the most mundane level, the delicate fabric of the city will be upended. Many Palestinian residents who see themselves as an integral part of Jerusalem and depend on it for their livelihood will once again relocate back to the heart of the city — as they did when the security barrier was constructed in the early part of this century. This will undoubtedly increase tensions, create instability, and raise the prospects of more violence. On the human level, the existing crowding, poverty and unemployment will soar. Daily life in this majestic and impoverished city will become even harder, contributing even further to the unraveling of the already patently strained social mosaic that is Jerusalem today.

The political implications are perhaps even more daunting. Another Israeli unilateral move focusing on Jerusalem — this time through the first outright act of annexation in the West Bank since June, 1967 — is a prescription for a global uproar of monumental proportions. Besides being an obvious violation of international law and all UN resolutions since Security Council Resolution 242, it would essentially bury the two-state solution. Such, perhaps, is the intent of the drafters of the proposed legislation. But even the United States under President Trump is wary of its consequences — which might explain the postponement of the government decision on the Greater Jerusalem bill.

If this is not enough, for Israel the fallout could be even greater: its quest for recognition of Jerusalem as its capital would be replaced by more persistent efforts to undermine the legitimacy of its claims to the city. Its overall legitimacy will be further questioned. And, while its present ultra-nationalist leaders continue to push their expansionist goals through invoking the most cherished symbol of Jewish tradition, Jerusalem, the Israeli enterprise in its entirety could be irreparably weakened. The current ruling coalition’s attempts to determine the future of the city through legislation are self-defeating and hence nothing short of sheer and utter folly. They will make the realization of the full meaning of the Balfour Declaration meaningless and will destroy what is left of the Rabin legacy.

Jerusalem is too central to Palestinian and Israeli relations; to Jewish, Christian and Muslim beliefs; and to the existence of its so diverse inhabitants to have its destiny determined unilaterally. That is the lesson of its past, the reality of its present and its destiny. Therefore any change in the territorial scope of the city and in its human composition should be determined by agreement between Israelis and Palestinians, whose life in Jerusalem is so inextricably intertwined.