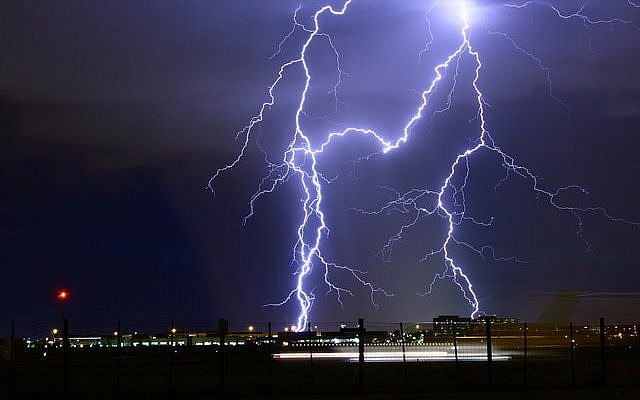 Lightning Does Strike Twice (Image Free for Use from Pixabay)

The BBC is at it again. In the first episode of Strike, a series based on the Cormoran Strike detective novels written by J. K. Rowling under the pseudonym Robert Galbraith, we are treated to the BBC’s usual gratuitous anti-Israel venom.

Following our hero, Strike, to a street protest, we hear one of the mob’s leaders say: “You call it the West bank strategy. You build an illegal settlement then cry racism at the protestors. Over there they enforce it with the IDF – the people’s land is stolen from under them.”

In general, J. K. Rowling has been supportive of Israel and is a strong opponent of anti-Semitism in England. While she has voiced legitimate criticism of Prime Minister Benjamin Netanyahu and his government, she is adamant that Israel, and its people, should not have to suffer a double standard.

She has written, in 2015, – “Israelis will be right to ask why cultural boycotts are not also being proposed against…North Korea.”

So, we can only assume that the provocative lies about the ”West Bank” are coming from the usual suspect – the BBC.

Using a TV series to get across their not so subtle message is not new. In 2018 the BBC drama ‘McMafia’ slurs Israeli businessmen. This series deliberately misquotes the Mossad’s motto, taken from (24.6) in the Book of Proverbs, as “By deception we will do war” instead of the correct version “For by wise guidance you can wage your war.”

A search of The Times of Israel for ‘BBC Anti-Israel Bias’ brings up many examples from – “BBC links Jew-hatred to Palestinian suffering at Jewish hands” to “BBC spent almost £333,000 concealing Mideast Balen Report on its coverage of Israeli-Palestinian conflict”.
Former Israeli ambassador to the UK Zvi Shtauber in a 2005 interview with BESA, The Begin-Sadat Center For Strategic Studies, said:

“The BBC is a problem in itself. Over the years I had endless conversations with them. Any viewer who looks at the BBC’s information on Israel for a consistent period gets a distorted picture. It doesn’t result from a single broadcast here or there. It derives from the BBC’s method of broadcasting. When reporting from Israel, the mosque on the Temple Mount is usually shown in the background, which gives viewers the impression that Jerusalem is predominantly Muslim.”
It couldn’t be clearer than that.

So, we must forgive J. K. Rowling and place the blame where it belongs, on the BBC.

The BBC is trying to reform itself. Figures published today show that no less than a fifth of news staff went to private schools. In response to this shocking revelation, the BBC is to launch a diversity drive. Perhaps a newsroom full of ex-plumbers and retired road sweepers will be less biased against Israel. With any luck they will not have heard of us.

But if the BBC continues with its anti-Israel policy, we viewers should come out on strike.