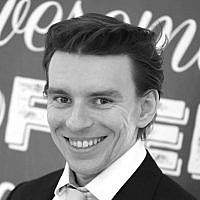 The Blogs
Max Ryabinin
Apply for a Blog
Advertisement
Please note that the posts on The Blogs are contributed by third parties. The opinions, facts and any media content in them are presented solely by the authors, and neither The Times of Israel nor its partners assume any responsibility for them. Please contact us in case of abuse. In case of abuse,
Report this post.

One of my first memories in the United States was going to the DMV and to the Social security office to obtain my driver’s license and social security number. When I received the application forms, I faced my first obstacle. It wasn’t the language barrier nor was it lack of a pen to write with. It was the ethnicity/race question. In Israel, I was frequently asked where my family made Aliyah from (a term that is usually used for Jews who immigrated to Israel. Similar in its meaning to pilgrimage). I was never asked about my race. What am I? I ignored the white checkbox as I knew I do not identify as white although for people who will judge me based on my skin color, they could presume I am white or passing as white. But how can I be white? I am part of a people that in the name of white racial purity were persecuted and almost exterminated. During the Holocaust and the pogroms against the Jewish community throughout history, my family’s skin color did not help them.

That is why I was deeply offended when I read Tamika Mallory, one of the Women’s March organizers, assertion that White Jews uphold white supremacy as white people. I felt the same anger when I saw Jewish Voice for Peace’s (JVP) “deadly exchange campaign” that argued Israel plays a role in the racial challenges here in the US. The goal of both arguments is clear: to further marginalize Jews and Zionists from the social justice community; painting Jews and Israelis as oppressors, and as a group that upholds and promotes white supremacy.

These claims are offensive and completely wrong.

Mere decades ago, Jews were discriminated against in America simply because they were Jews. Jewish identity could influence one’s chances to get a job, get accepted to a country club or social circles and numerous quotas for Jews were common in academic institutions. Long before Kimberlé Williams Crenshaw introduced the theory of intersectionality, Jewish individuals suffered from hatred, prejudice and marginalization because of the ethnic and religious element of their identity.  One might have anticipated that Jews, with their historical experiences, would be invited and incorporated into the movements Crenshaw’s theory inspired. But the reality remains that some intersectionality-motivated movements have betrayed Jews and kept them away from those movements.

Some will argue that the exclusion of American Jewry is caused by its reputation as an affluent & privileged community that doesn’t show up for the struggles of other minorities. Putting aside the question of Jews feeling welcomed into those circles, the belief that support for a minority is conditional and not the inherit goal of every movement for solidarity and equality, reflects poorly on those movements and shines a light on the flaws of that mindset. Criticizing one minority group for its success is counterproductive if your goal is to uplift other communities to the same status.

Support for minority rights should be unconditional. No minority should be asked to “check” parts of their identity at the door in order to receive solidarity and support. Zionist Jews march with women for gender equality even if they disagree with the self-proclaimed leaders of the movement. Zionist Jews march for LGBTQIA+ rights even if some of the marchers see a Star of David on a rainbow flag as offensive. Zionist Jews march and proudly say “Black Lives Matter!”, even if they disagree with one of BLM chapter’s boycott of the country they hold dear. Zionist Jews support refugees from the Middle East despite the fact that many were probably raised to hate Jews and denounce Israel’s right to exist. Will Jews receive the same unconditional support in return?

Jews have struggled for equality not only in the United States. European Jews in the 19th and 20th centuries tried to assimilate into European society. Although many European countries emancipated their Jewish citizens, providing them with equal legal rights, the legal emancipation did not lead to the emancipation of many European people from hatred and prejudice toward the Jews. This failed emancipation led to the creation of the Zionist movement and provided a possible solution for Jews around the world. If assimilation will not liberate Jews from persecution then Jews will free themselves from persecution by denying assimilation and returning to their historic homeland. Little did they know that the targeting and blaming Jews for all the wrongs in the world would follow them to the Promised Land.

JVP Deadly Exchange campaign blames Israel for police brutality conducted by US enforcement officials, after returning from training in Israel, against people of color in the US. While not stated blatantly, the comparison JVP is drawing is clear: Palestinians are compared to Black, Brown & indigenous communities in the U.S while Israeli police officers are portrayed as white, oppressive racists who only target people of color.

Are all Israeli police officers “white”?   Every year, according to the freedom of information law, the Israeli Police are required to publish an annual report. In that report the Israeli Police present the composition of their personnel. According to the recent report:   12.9% of the Israeli police officers are not even Jewish. While that report doesn’t provide information about the background of the 87.1% Jewish police officers, every Israeli can agree that a meaningful number of them are descendants of Jews who came from the Middle East and North Africa. According to the JVP rationale, they should be identified as people of color. And yet, they are not. This double standard, this painting of all Israeli police officers in one color, is driven from outright hypocrisy. We bear witness to similar dangerous, incendiary messages when Representative Ilhan Omar compares Israel to the South under Jim Crow.

To be clear, Israel is not perfect. In its pursuit to be a “shining city on a hill”, it makes mistakes.  And yet as a country a mere 70-years-old, Israel shows it is a faster learner than many of its more veteran counterparts in the family of nations.

The argument that a 70-year-old country is responsible for racism in a country that in the 18th century counted people as three-fifths of a person, that allowed local states to legislate Jim Crow laws in the late 19th century and that abolished segregation only in the mid-20th century, is both ridiculous and a modern-day blood libel against the Jewish people.

There are those who try to transform the Israeli-Palestinian conflict into a religious or racially motivated conflict. They give legitimacy and justify actions against the other side by some “divine purpose” or cause or in the name of racial or religious superiority. The core of the conflict is between two national movements, not between the Jews and Muslims or between “whites” and “browns”. The racial argument is even more tenuous. Even though Jews took an unwanted 2000 year leave from the land, Jews and Arabs alike are both Semitic peoples that originated in the Middle East.

The kind of ideology Tamika Mallory & Ilhan Omar support and kind of campaigns JVP spearheads should be unequivocally dismissed and welcomed with the simple comment: