The World Council of Churches is electing a new General Secretary in March. The current General Secretary is a man by the name of Olav Fykse Tveit who will step down from his position in April to serve as the Presiding Bishop of the Church of Norway.

Tveit, like his predecessor Samuel Kobia, allowed the WCC to be hijacked by anti-Israel activists who took their cues from Christian clergy living in Muslim-majority countries in the Middle East. These church leaders know full well what they had to do to stay in the good graces with their extremist neighbors — beat up on Israel and promote an economic and cultural boycott of the Jewish state.

And that’s exactly what they did. They convinced the WCC to establish two organizations,  the Palestine-Israel Ecumenical Forum (PIEF) and the Ecumenical Accompaniment Program in Palestine-Israel (EAPPI), to deploy theology and human rights talk to demonize Israel. One of the job responsibilities of the WCC’s General Secretary has been to sell the notion that messaging from these two organizations qualifies as peacemaking and is not really the rank anti-Israel propaganda it is.

WCC staffers keep telling everyone that the organization they run doesn’t support the boycott, divestment and sanctions (BDS) campaign against Israel, but the fact remains that activists associated with the WCC serve as a crucial backbone to this movement. When they return home from their stints as tourist-agitators in the West Bank, EAPPI activists promote BDS. It’s an unwritten rule of EAPPI activism.

The search committee charged with presenting the WCC’s Executive Committee with candidates to replace Tveit as General Secretary has nominated two people for the job. 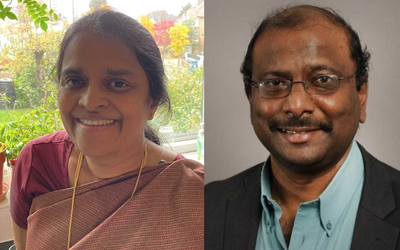 Dr. Elizabeth Joy (left) and Dr. Jerry Pillay (right), are candidates for the March election to choose the next General Secretary of the World Council of Churches. (WCC Photo)

The first is Rev. Dr. Jerry Pillay, a theologian from South Africa, who has argued that Israeli policies toward the Palestinians constitute “Apartheid in the Holy Land.” In 2014, Pillay spoke at an event organized by the Israel-Palestine Mission Network of the Presbyterian Church USA, which like the WCC has a long history of demonizing Israel.

At the closing of his speech, Pillay declared, “For the sake of just peace we may have to support boycott, divestment and sanctions. We may have to go against those we do not wish to isolate but in the words of Luther we may need to say: ‘Here I stand, I can do no other! So help me, God.’” If Pillay gets elected, it’s going to be nearly impossible for WCC staffers in Geneva to keep telling everyone the organization is not part of the BDS movement.

The second candidate is Dr.  Elizabeth Joy who currently serves as director of Churches Together in England. She is a member of the Malankara Orthodox Syrian Church. Internet searches indicate that Joy, who hails from India, hasn’t said much about Israel or BDS.

I tried to reach Dr. Joy through UK diocese of the Malankara Orthodox Syrian Church, where she has worked as Deputy Secretary for Ecumenical Relations and through Churches Together in England. I’ve sent emails to both of these organizations and have also called a number I have been given for her, but no luck.

I’ve even “Tweeted” at her, but as of this writing (late Friday afternoon), I have gotten no response.

So the question is simply, “Who is Dr. Elizabeth Joy and what does she think the WCC should do in reference to the Arab-Israeli conflict?” Does she want to lead the WCC as it tries to relive its glory days of the anti-apartheid movement in South Africa by attacking Israel? Or does she think that the real victims of modern-day apartheid are Christians living in Muslim-majority countries?

Hopefully, we’ll find out before the election in March!