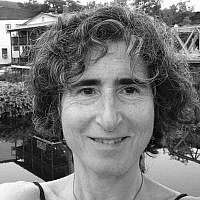 The Blogs
Amita Jarmon
Happy to be Here
Apply for a Blog
Please note that the posts on The Blogs are contributed by third parties. The opinions, facts and any media content in them are presented solely by the authors, and neither The Times of Israel nor its partners assume any responsibility for them. Please contact us in case of abuse. In case of abuse,
Report this post.

As of 2 AM (26 minutes ago) there is a ceasefire between Israel and Hamas. (Let’s see how long it lasts). Here in Jerusalem I hear a CONTINUOUS LOUD VOLLEY OF STUN GRENADES and “fireworks” (which when fired horizontally are dangerous), between Israeli forces (police, border police, maybe even the IDF) and Palestinians.

I don’t know exactly where — Tsur Baher, Silwan, Jabel Mukaber are the nearest neighborhoods where this could be happening, all within 2-3 kilometers of the lovely, quiet street where I am so blessed to live. I know it’s happening on the north end of the city as well. I’m sure stones are being thrown. And there are lots of sirens – police, ambulance, firetrucks?

It really sounds like a war is raging nearby. I cannot sleep with this going on. If I had fallen asleep earlier, I might have slept through, but… It seems to me that these mini-explosions, which I have heard every night during the current conflict, got at least 3 times louder and more insistent after 2 AM tonight. Very unsettling!

I love that I live just one block away from Park HaMesila, the 7 km stretch of green (at least it’s green here in Baka) and bike path/rail trail, that runs from the Old Train Station through Baka, the Katamonim and Beit Safafa, shared equally by Palestinians and Jews. We all bike, walk dogs, jog and stroll along this path in harmony. People sit on benches in peace. True, you rarely see Jews and Palestinians literally walking hand-in-hand, but at least we walk in very close proximity with a good vibe. There is a sense of freedom, sanity and safely here for everyone.

In “normal” times there is no sense of “we own this strip and you are merely a guest here – don’t step out of line.” l loved seeing so many Palestinian families out strolling in the evenings after Iftar in the first two weeks of Ramadan last month before things started to get really tense.

Has anyone noticed that Park HaMesila has been virtually “Arab-rein” for the past 12 days? This past Monday, Shavuot, in the late afternoon/early evening, I was out walking with a friend and bumped into many other friends and acquaintances. Such a nice atmosphere. Yet I couldn’t help feeling bereft at the lack of Palestinians on the path. True, you can’t always tell by looking. Maybe there are a few who have the courage to keep jogging. But certainly no women in Hijab have been seen in these here parts for the past 2 weeks or so.

What I do see are groups of people (men & women) in uniform — police, border police. If I were a Palestinian I would be afraid to walk along here these days, especially if I were a man between the age of 15-40. When I say this to some Jews, the response I get is, “Yes, Jews carry guns in self-defense, but we don’t actually use them.” This may be true in general, but the fact that there are large groups of armed people strolling by is intimidating when every one is on edge and a young man can’t know whether he will be seen as suspicious. I feel very protective, perhaps overly so, and very indignant on behalf of my neighbors who do not currently feel safe or welcome in areas where they normally do.

Last Friday I went to see a private client on a side street off Emek Refaim. Right in front of their building, 2 police were talking to two Palestinians, one young, one middle aged. I stopped and stood very close by. The police asked what I was doing. I said I wanted to listen. They asked the Palestinians if they were OK with my being there, and they said yes. A police read the charges and the punishment – no car for a month, a steep fine, no license for 3 months. It was very hot. It was a lot of Hebrew. He asked the older man to translate for the younger one – the driver. The police, who knew some Arabic, was not happy with the translation. I pointed out that he had spoken very quickly and it was possible that the older man didn’t fully understand, as I myself had found it hard to follow all the details.

A police woman showed up with iced coffee from Aroma for herself and her two colleagues. My client’s Haredi daughter (who happens to be my friend) also appeared at that moment and asked what was going on. I told her I just wanted to be a witness. I can’t help but think about racial profiling in the US. I explained this to her that when we went inside so that I could bring the 2 Palestinians some cold water.

It’s of course very possible that the young man had been driving dangerously and really needed to get off the road and learn a lesson. I have no way of knowing what really happened, but I felt uncomfortable. All I could do was demonstrate that I cared by witnessing and bringing them some cold water. I then went inside to treat my client. I saw through the window that they remained out there for at least another 20 minutes.

I know it may seem silly and overly ingratiating, but as in previous periods of extreme tension in this city, when I see a Palestinian in the vicinity — at the bus stop on Hebron road or unloading a truck in the neighborhood — I have several times in the past 12 days reached out. I start by asking if they speak Hebrew. Then I say that I feel very very sad about this conflict. I say that I believe this Land belongs to both Peoples and that I want to live here WITH YOU, TOGETHER, and that I am so sorry about all the dead in Gaza, especially the children (Palestinians are looking at images of dead and wounded children in Gaza all day every day these days).

A couple of times I have teared up. I usually reach out my hand. You might expect them to sneer at me, but I always get a warm response — I think because they feel that I am really pained for the loss of life and suffering all around, and that I simply want to connect human to human, heart to heart. I actually put my arm around a guy at the bus stop last week and he didn’t seem weirded out. He felt where I was coming from. It’s worth the possible embarrassment. I know it’s easy for me because I am a woman. It’s much harder for a man to do this, because he would probably be seen as a threat in such times, both by other men and by women.

Even if this ceasefire with Hamas in Gaza holds, anger and fear are still raging in hearts and minds between the River and the Sea, and will continue to rage for many months to come — so much damage has been done on so many levels. Reaching out a heart and a hand does not mean that I am taking full responsibility for the damage. I am simply recognizing the other’s humanity and pain, and expressing my longing to connect.

In times such as these I am especially grateful that I work in health care, where I am blessed with several Palestinian co-workers whom I can hug every day. I cannot hug all of them, just as I cannot hug all the Jews I work with, but I have 4 Palestinian friends at work whom I love dearly and am always happy to see – all the more so in these times.

It’s now 4 AM and the Muezzin are calling the faithful to prayer across the city. This too sounds louder and more extended than usual. It’s Friday, their weekly Shabbat; that may explain it. I hear birds beginning to chirp their dawn prayer. I still hear an occasional boom. Will try to sleep now.

About the Author
Fortunate to have grown up in Amherst, MA. Roots in Hashomer Hatzair. "1st Aliyah" in 1982. Trained in Israel as a physiotherapist. Returned to the US for 21 years. Became a Reconstructionist Rabbi and served a congregation on the Maine Coast. "2nd Aliyah" in 2009. Physiotherapy is my current primary means to earn a living while learning from, loving and serving my fellow humans -- my patients, their families, and my coworkers.
Related Topics
Related Posts
Comments