Last week, I ate the best shakshuka in the whole entire world. Like, seriously, people. I know you’re thinking “WTF, it’s just a few eggs, a little tomato sauce, some bell pepper, and a few onions…” but believe you me, this shakshuka was… wow.

So what made this shakshuka so different?

After showing more enthusiasm than Meg Ryan during the Katz Deli scene in Harry met Sally, I asked the chef if he had gotten the mushrooms at the shuk.

And not the supermarket, neither.

These mushrooms came from a field. A field kissed by rain and sun, creating the perfect conditions for fungus growth. A field of flowers and butterflies where Smurfs frolic and play like good little hippie communists. A field conveniently located next to the Kibbutz cemetery.

Two days later my stomach started to hurt. And since I am Woody Allen with girly parts, I thought about the mushrooms I had so enjoyed. And I figured, well that’s that: I’m a goner. Bubye. Shalom. Vaya con dios, homies, I am Audi 5000.

Look. I love living in Israel- this is my home. But “forever” is a longass time, and I’ll be real: I like the fluidity that comes with knowing that I am here “for now.” And possibly “for always.” But not necessarily. Living here is a choice – it’s one I make every single day. Because even though it would be a legal and logistical nightmare, I could leave and go back to LA. No one is forcing me to be here.

And without getting too dewy-eyed on you, I’ll tell you straight up: I love Israel. Last week, for example, I watched my children flitter between orange trees on the kibbutz. The wind shifted, and they are half hidden in the grove — pixels of pink and blue peeking out between emerald leaves.The sky grew thick with clouds. People, this is Winter in Israel at its finest: From the sun licking your skin like a cat to the wind tearing the hair off your arms in the space of a minute. Hell, this is life in Israel: Living on the edge where an explosion on a bus or a rocket siren or yet another tax hike can send you keeling over. And yet, the view – oh, the view – is exquisite and so worth it. 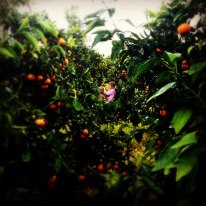 “There is no way I could have given these kids the life they have if we had stayed in LA” I told my ex husband.

But I know this to be true as well: When you’re dead, you aren’t living in Israel. You’re buried in Israel. “Forever.” And this raises an existential question:  Because just like your ass can’t dance at two weddings at the same time, your body cannot be buried in two places ten time zones away from each other.

So while I sat there with a stomach ache, I thought about my options:

Being buried on the kibbutz where my children live makes sense. But, alas, I’m not a kibbutz member, and there are rules about such things. No membership? No waiting for the Messiah HERE, suckah!

So, what then? Some random public cemetery among strangers? Look. It was hard enough making friends in Israel when I first came here — and at least then I was mobile and smelled nice. And just because my kids are here now does not mean they will be here for always. Moving to this country was not their choice – and they may choose differently someday.

Ok, so maybe I could be shipped back to LA – back home to the plot where my mother is buried, and where my dad will be buried as well. It’s a nice idea – very enfamille. But that is a long way to travel for the folks in Israel who would like to dance on my grave. (You know who you are. And I know who you are. And yes, I will haunt you so bad.) The other downside is my kids are not in LA – at least not now. And maybe not ever.

But why limit myself to the cold hard ground?

Buried at sea is nice. I grew up in Venice Beach, and have always felt a kinship with the ocean. But… while being dumped in the middle of the ocean is very Zen, very ‘go with the flow,’ I don’t do swimming with fish. They make me squirm. And it would be, like, 10,000 times worse if they were nibbling on my appendages and whatnot.

I guess cremation would solve everything. I could scatter with the wind: A literalization of my existential metaphor.  Which is, of course, against our religion.  Which makes sense since I never liked to follow rules anyway.

And so it goes. Too many choices. Only one body.

Look. It isn’t just trying to figure out the place. It’s the fact I’ve got issues around this: For the last few years, I am taking root on foreign soil, and wondering when that magical blend of dirt and sun and rain and snail pee will come together. So far, so good… but I know that at some point, I may want to uproot and live somewhere else. And then come back. Or not.

Oof, I wish it were simple: When my mom was told in no uncertain terms by her oncologist that she was a goner, she lit a cigarette (she had ovarian, not lung cancer, people, so stop with the judgment) fired up our decrepit Mac Performa, and sat down and began planning her own funeral.

Book social hall for post-funeral reception? Kinda hard to do, but she gave the Sisterhood notice that the end was nigh and they were all on standby with Roll N’Rye deli on speed dial.

Processional playlist? She cobbled together a rockin’ mix tape of Bob Dylan, Peter Paul and Mary, Beethoven, and the Beatles, so that was done.

She even helped me and my dad write our eulogies

For my mother, the biggest issue of all was a no-brainer. She knew LA was her home. And she knew she wanted to be buried there.

But for me, it’s the opposite: The details are easy: I want Ding Dong the Witch is Dead played during my processional. I want my Klout Score on my tombstone. I want an Irish wake. And a rabbi.

I want to be buried in my hooker boots.

But for the life of me, I still don’t know WHERE I want to be buried.

(Meanwhile, as I stewed in my existential crisis my stomach was still hurting. So, I sought solace where I am always home: Facebook. )

“I may have eaten wild mushrooms over the weekend. My stomach hurts. Am I dying?”

(Drama Queen? Moi? How dare you! I shall cut thee!)

Anyway. FTR? Crowdsourcing a crisis is the way to go. The responses were fast — from all over the world. From the best friends I’d recognize by the freckles on their asses, to the FB friends I only know by their Avatars, I had support. From LA to Tel Aviv and back again via Paris and NYC. From a teeny tiny internet cafe in the Himalayas, to an upscale shop in North London, to a research center in Karachi. I have friends.

A prominent doctor in Israel messaged me.

“Did you eat the mushrooms alone?”

“Is the other person feeling fine?”

“Phew” for many reasons. Because in my little life-after-death mini-drama, I realized two things:

2. Ambiguity is ok. Taking my sweet ass time to put down roots while all the while knowing that I may tear them up again is fine too. Because even if I never live somewhere forever, I’ll always have that virtual home where my friends and I are connected. And while things may feel temporal from time to time, it’s all good: I can crowdsource any crisis from any computer in the world.

And I am living. Here. And someday, maybe there.

And when I’m dead, I’m dead. And whether it be in LA or in Israel – or even on the steppes of freaking Mongolia– it’s completely irrelevant where I’ll be pushing up daisies. Or mushrooms, for that matter.