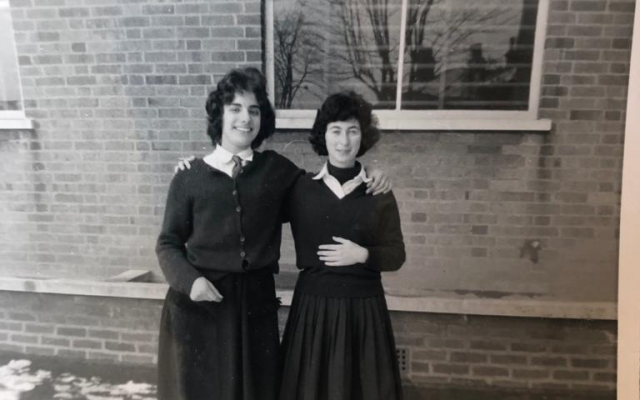 image: The author and a friend at grammar school, 1960. (courtesy)

My grandchildren, who have grown up in a secular environment in Israel, find it odd that I, their (hopefully) broad-minded grandmother, should have gone to a secondary school for girls. In Israel it is only those segments of the population which adhere to ancient tenets of gender identification that maintain gender-segregated schools for their offspring. In England, where I grew up, the situation was similar but the ideas behind it were different.

Those were different times when I began attending school, back in the 1940s and 1950s. England was recovering from the war and struggling to maintain its place in the world. To my generation of children it seemed the most natural thing in the world to take the eleven-plus exam and be sent according to one’s result to either a grammar school or a secondary-modern (comprehensive) school. Naturally, the aspiration of my refugee parents was that I should be accepted by one of the grammar schools, and that was what indeed happened. I passed the exam and was given a place at a nearby grammar school for girls, the Brondesbury and Kilhurn High School. Secondary-modern schools were mostly co-educational and were considered inferior.

Secondary education for girls had not been widely available for as long as it had been for boys. Even in secular England, for hundreds of years education had been considered suitable only for boys. If a girl could read and write that was fine, but more important was her ability to maintain a home, sew, cook, embroider and fulfil the requirements of the male-dominated society. That was the way society was run, and there were no religious associations involved, to the best of my knowledge.

After all, women were considered inferior intellectually and were not given the vote until 1918 in England, with most European countries following suit soon afterwards. Early in the twentieth century exceptional Englishwomen such as Henrietta Barnett and Philippa Fawcett campaigned for secondary education to be extended to girls, organized financial and moral support and established the first high schools for girls in London and elsewhere. They may have been influenced by the system prevailing in the USA, but they were certainly pioneers in the context of Britain.

Since Israel’s foundation – and even beforehand — the concept of segregation of the sexes was rejected, and most of the country’s institutions, including schools, were based on the principle of gender equality. Thus, the age-cohort that parallels mine took it quite for granted that secondary education should be co-educational. After all, the basic principle underlying society as a whole was that of equality, and only the educational institutions allied with the orthodox Jewish population maintained separation of the sexes. In the 1960s the British education system was radically overhauled, and many of the single-sex secondary schools were dissolved or converted into mixed-gender schools.

The question remains whether either of the two systems yields better academic results and psychological benefits. Studies have shown that girls tend to perform better academically in single-sex schools, though it’s not clear what effect co-education has on boys.

Teenage years are difficult enough at the best of times, but it seems to me that restricting youngsters to an environment that bears no correspondence with general society deprives them of the ability to learn to cope with real life. So probably the sooner youngsters learn that the world consists of both boys and girls the healthier it is for all concerned.