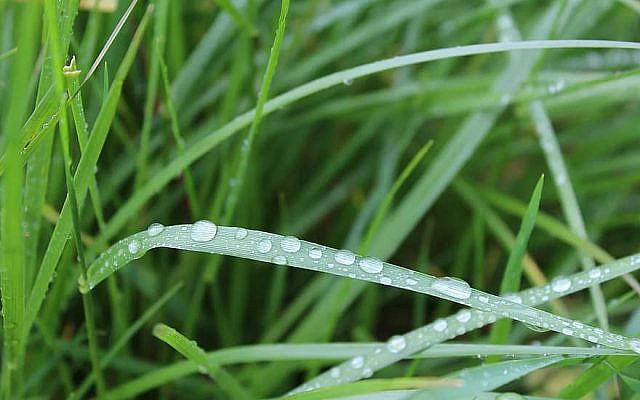 The Bible uses many words that mean “rain”. The rationale for this might simply be that rainfall was so important to ancient Jewish society who lived in an agrarian civilization. However, given that the words of the Hebrew language bear intrinsic meanings and the Bible is not simply a thesaurus, there must be a deeper implication to the multiplicity of words for “rain”.

The most commonly-used word for rain is geshem, but the Bible also uses other words in referring to the fall of precipitating water from the heavens. In a Biblical passage popularized because of its inclusion in the daily Shma prayer, G-d says that if the Jews properly listen to His commandments, then He “will give the rain (matar) of your land in its time, rain (yoreh) and rain (malkosh)” (Deut. 11:14). That is, He promises to give matar in its proper times, and two time-bound types of rain are yoreh and malkosh. First, we will explain the difference between geshem and matar, and then we will discuss the difference between yoreh and malkosh.

Some explain that geshem is a general term which includes all sorts of rain, while matar refers specifically to “rains of blessing”. A similar approach defines matar as specifically heavy rain, which explains why forms of that word are also used in conjunction with the volley of fire and brimstone that destroyed Sodom (Gen. 19:24) and with the plague of hail in Egypt (Ex. 9:18).

Others take the opposite approach, arguing that matar is the general term for rain, while geshem refers to a specific type of rain — in this case hard rain or “rains of blessings”.

Others explain the difference between the rains of geshem and the rains of matar by noting a fundamental difference in their origins. They write that geshem refers to a natural system in which evaporated waters and other gasses are held in clouds until certain winds drive them to release those vapors, resulting in rainfall. These rains are not bound to any specific times, but simply materialize naturally whenever enough vapors have collected in the clouds. For this reason, the word geshem was borrowed by later sources to refer to all sorts of “material matter” (i.e., gashmiyut). Matar, on the other hand, refers to a supernatural order by which G-d directly brings rain at certain times. In the passage cited above, those time-bound rains are known as yoreh and malkosh.

What are yoreh and malkosh? The word yoreh (or moreh) literally means “shoots”, as well as “teacher”, while the word malkosh is related to the Hebrew word mekoshesh (reaper). What do these literal translations teach about these time-bound rains? The Talmud (Ta’anit 6a) explains that yoreh falls at the beginning of the rainy season, thus it is called a “teacher” because it “teaches”people when to reinforce their roofs and bring their produce indoors to avoid possibly being destroyed by subsequent rains. Malkosh is the name given to rain which falls at the onset of spring (Pesach-time). Its name is related to the Hebrew word for reaping because malkosh falls near the harvest season, right before the produce is reaped.

In short, the different words for rain are not simply a product of the agricultural importance of rain; they refer to different ways in which G-d provides for the world. Some elements of Creation require a strong, torrential downpour in order to be quenched, while others require only a drizzle and would otherwise drown in a deluge of water. Moreover, vegetation tends to grow at different times of the year, so rain must drop at those different periods. G-d accommodates all of these different considerations, and the Hebrew language reflects those concerns.