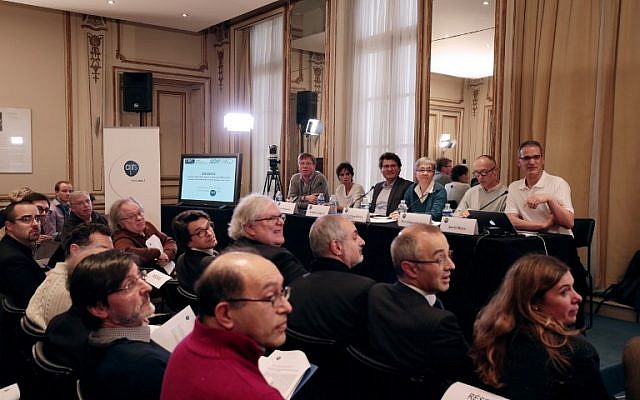 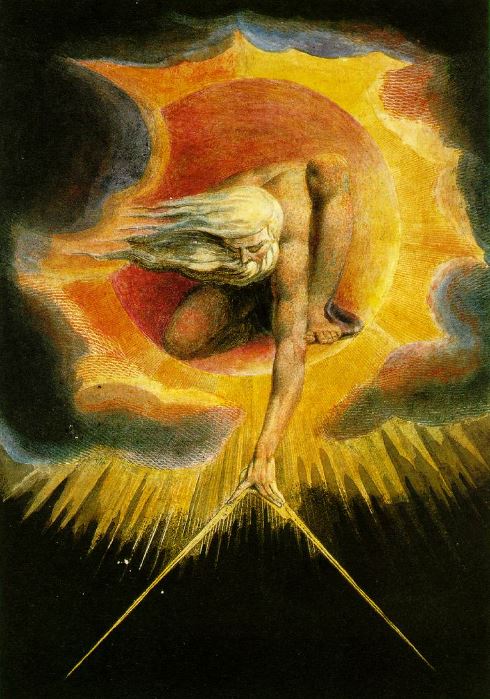 The Ancient of Days by William Blake (Wikimedia Commons)

I was almost speechless when it was announced on February 11 by David Reitze, Rainer Weiss, and Kip Thorne that the Laser Interferometer Gravitational-Wave Observatory (LIGO) had made the first direct detection of gravitational waves in history. Einstein’s equations had predicted them a century ago. The announcement was especially meaningful for me because I had met Kip Thorne in 1998 and Rainer Weiss in 2000. I personally knew how important it was to them.

Kip Thorne, Ronald Drever, and Rainer Weiss had been the co-founders of LIGO. Unfortunately, Drever was unable to attend the announcement because of illness. The achievement was an amazing fulfillment of their dream that began to take shape a half-century ago. Their extraordinary achievement – with the help of over 1,000 scientists – came after decades of R&D that resulted in designing, constructing, and fine-tuning the most precise measuring device ever built by human hands.

As a gravitational wave passed through earth on September 14, 2015, it altered the distance between LIGO’s mirrors 1/10,000th the width of a proton or 10-19 meter. LIGO’s ability to detect such a small change is comparable to measuring the distance between the sun and the nearest star to the accuracy of the width of a human hair. Gravitational waves emitted from the collision of two black holes 1.3 billion light-years away moved LIGO’s sophisticated apparatus exactly as Einstein’s equations a hundred years ago had predicted.

William Blake’s famous painting, The Ancient of Days, encapsulates so well, in my opinion, the role of measurement in studying God’s creation. Ironically, when LIGO is viewed from the air, its shape is remarkably close to the measuring device portrayed by Blake in his anthropomorphic depiction of God.

Each of LIGO’s arms is 4 kilometers in length. (LIGO in Hanford, Washington)

Rainer Weiss, who happens to be Jewish, called it “a miracle” that the equations of Einstein worked so well in predicting gravitational waves and describing the black hole system LIGO found. Weiss was the primary designer of the gravitational-wave interferometer that detected the waves. Of course, the LIGO Scientific Collaboration has now grown to include about 75 institutions in 15 nations.

Rainer Weiss’ family had taken him and fled Berlin in late 1932 just before Hitler finally took control of Germany the following year. Einstein himself was visiting the United States in 1933 when Hitler came to power and never returned to Germany. Little did Einstein know that Weiss, only a few months old in 1933, would grow up to play a central role in the first direct detection of the gravitational waves predicted by general relativity.

Kip Thorne has said, “There are large numbers of my finest colleagues who are quite devout and believe in God . . . There is no fundamental incompatibility between science and religion. I happen to not believe in God.” Yet when Kip realized that LIGO had detected gravitational waves and thereby validated his lifelong work, he spontaneously exclaimed, “Oh, my God.” 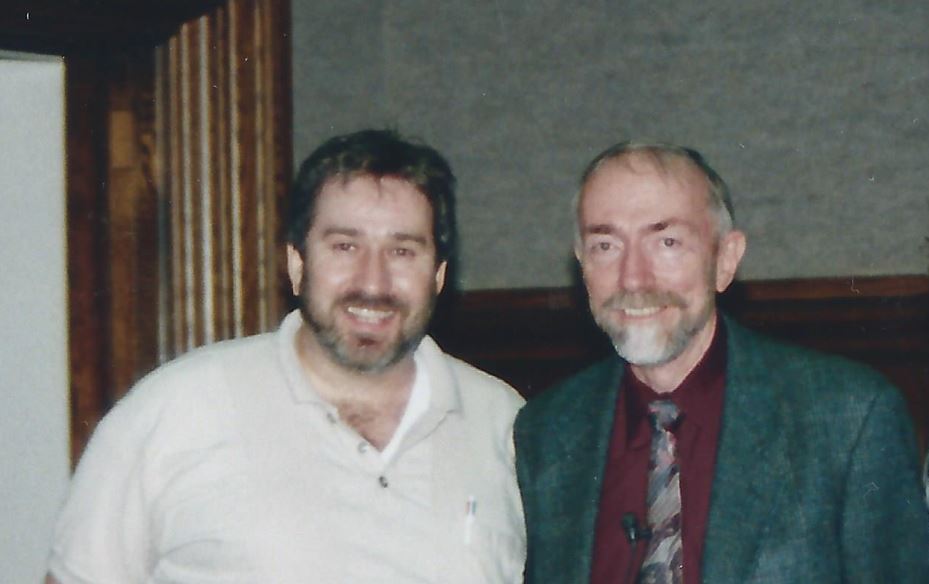 Yoeli Kaufman and Kip Thorne in 1998

In my opinion, the ability of mathematics to predict real-world phenomena many decades before people can devise the methods or technology to detect them indicates to me that there is something resembling the divine in the power of mathematics. Albert Einstein said it like this, “The creative principle resides in mathematics . . . I hold true that pure thought can grasp reality, as the ancients dreamed.”

Psalms 19:2-3 says that the heavens declare the glory of God and the sky shows His handiwork, day unto day uttering speech, and night unto night revealing knowledge.

It is incredible that the frequency of the gravitational wave forms is in the human hearing range. It is possible to actually hear gravitational waves. The scientists played the sound of the two black holes colliding 1.3 billion years ago. We can hear the universe. This is very much in line with Psalms 19:2-3.

In the haftarah for Ki Tisa in I Kings 18:20-39, Elijah in a very politically incorrect way mocked the prophets of Baal. Perhaps Baal wasn’t answering their prayers because he did not think that they were sincere enough. So they inflicted pain and injury on themselves as proof of their faith. Surely, Baal wouldn’t let them go on cutting themselves. After all, they had been faithful theologians. Now it was time for Baal to keep his end of the bargain and recognize their scholarship.

Yet there was only silence. None of their self-sacrifice, self-infliction, or screaming were good enough. Why? Because Baal wasn’t actually there. Baal fit their value system and provided many hours of enriched theological discussion, but he was just a mental invention. He did little more than provide his clergymen profitable careers, and such employment only lasted until Baal was exposed for what he wasn’t.

There was something different about Elijah. The Tishbite was interested in one thing and that was “what works.” After Elijah’s God answered by fire, the people exclaimed, “HaShem, He is God.” HaShem is revealed in his creation. (יְהוָה הוּא הָאֱלֹהִים, יְהוָה הוּא הָאֱלֹהִים)

I’m reminded of Einstein’s famous words when he defined insanity as doing the same thing over and over while expecting different results. The result of all the prayer, pleading, intercession, weeping, wailing, self-sacrifice, and now self-infliction by the false prophets was silence from Baal. Obviously, the 450 theologians that Elijah exposed were mentally challenged because they kept doing the same things over and over again while continuing to get the same result – nothing but silence from their god.

In my humble opinion, if the Tishbite were present with us today, I think that he would agree with Einstein’s definition of insanity. In fact, after watching the prophets of Baal for a while, he couldn’t help himself. Elijah started laughing, not because he didn’t respect their sincerity, but because they had made themselves into clowns. And no matter how we might try not to laugh, eventually clowns produce a giggle, and after a while, we are laughing out loud.

I think that Elijah would have liked Rainer Weiss. Like Elijah, Weiss is interested in “what works.” He is an experimental physicist. It wasn’t enough that the equations of relativity had never been proven wrong. It wasn’t enough that Russell A. Hulse and Joseph H. Taylor had detected indirect evidence for gravitational waves. Weiss set about to construct the means by which they could be directly detected.

Most people, including Einstein himself, feared that gravitational waves were too weak to be detected by anything that humans could make. Yet Weiss believed that if the arms of the gravitational interferometer could be made long enough, it might succeed. Weiss published an analysis of interferometer use in 1967 and initiated the construction of a prototype. And the rest is history.

Science is the most accurate description of God’s creation. All theological documents, no matter how ancient, have their limitations. The false prophets’ religion did not actually work when it was put to the test. Elijah’s religion not only worked, but it worked in a spectacular way. The equations of relativity also work in a spectacular way.

Einstein, by his own admission, sought to understand the mind of God. He said that he wanted to know God’s “thoughts” and “how he created this world.” He said, “Nature shows us only the tail of the lion. But there is no doubt in my mind that the lion belongs with it even if he cannot reveal himself to the eye all at once because of his huge dimension.” Einstein spent much of his life in pursuit of a unified field theory that would explain more fully what relativity explained only in part.

Both Elijah and Einstein believed in a lion that is ultimately real. They both believed in a cosmic religion that actually works and responds when it is interrogated or called upon. Reiner Weiss started “calling” for gravitational waves almost a half-century ago and constructed the means by which he could hear the response. Now the whole world has heard. No one is criticizing Weiss for calling the equations of relativity and the detection of gravitational waves a miracle.

About the Author
Yoeli Kaufman earned his bachelor’s degree in Near Eastern Languages and Cultures and then worked as an analyst and Arabic translator for U.S. Army Intelligence. His master’s degree was in Educational Administration from Temple University in Philadelphia. Eli now regularly writes for the Jerusalem Post, the Times of Israel, and Diario Judío México.
Related Topics
Related Posts
Comments
Advertisement