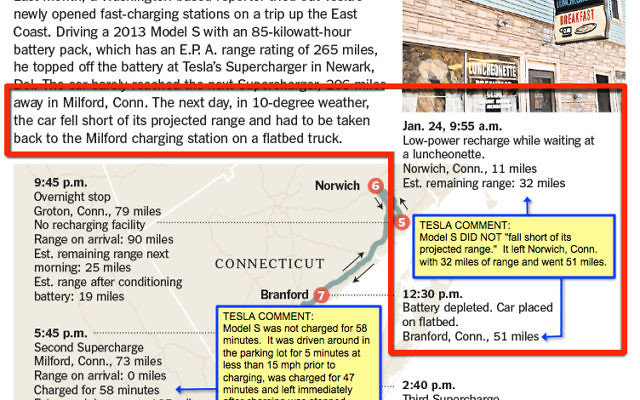 This is not a story about electric cars: this is about journalistic ethics. In the words of the Big Lebowski:

I’ve got certain information, all right? Certain things have come to light.

Last week I wrote for Times of Israel about a New York Times article concerning a cold weather road test of the Tesla Model S electric car. At the time I made the basic assumption the New York Times possesed some degree of journalistic integrity and its reporter had reported on his trip factually and in good faith.

Shortly after my post, the boss of Tesla Motors, Elon Musk, tweeted he would reveal documented proof that the New York Times journalist who conducted the test was lying. Tesla have now produced their evidence and it is absolutely damning of the New York Times and its reporter John Broder.

It’s perfectly clear John Broder did not report truthfully on his trip and took deliberate and calculated steps to ensure the car would run out of power short of one of his destinations. Tesla know this precisely because they have reams of logged data downloaded from the car.

I did, however, criticise Tesla Motors for giving the journalist a car for this journey, especially without checking his background (he doesn’t like electric cars).

Elon Musk agrees and, because he is clearly a mensch, has appologised to the entire electric car industry for his company’s mistake in trusting the New York Times:

We assumed that the reporter would be fair and impartial, as has been our experience with The New York Times, an organization that prides itself on journalistic integrity. As a result, we did not think to read his past articles and were unaware of his outright disdain for electric cars. We were played for a fool and as a result, let down the cause of electric vehicles. For that, I am deeply sorry.

I also apologise to Tesla and Elon Musk: clearly their amazing car can make this trip easily if the driver actually wants to instead of wanting to fail.

Many times in my life I’ve found  when I have extensive knowledge of a particular subject, main stream reporting on that subject is woefully inadequate or out right wrong. I see this time and again on Israel.

I’ve only been watching electric cars for a year or so but I already see this is often the case. This New York Times hit piece against Tesla  immediately caused a drop in the company’s stock value. That is the power the NYT wields with such gay abandon. Tesla is fortunate that it can’t make its cars fast enough and has a long waiting list: this probably wont affect sales in the short term.

So often when we see a piece of anti-Israel bias there is little way to counter except with esoteric and confusing historical arguments where claims are met with deliberately falsified counter claims.

In this case we have reams of absolute scientific facts: the journalist said he did one thing; the car’s computers show he did another.

If this doesn’t result in the firing of this journalist and the strong censure of whichever editors defended him, we know the standards of modern journalistic ethics have fallen off the chart.

Brian of London made aliyah from the UK to Israel in 2009. For many years he has blogged and broadcast about Israel, technology and other subjects. Most recently he’s focused on the experience of driving an electric car every day. Brian has a scientific PhD but today owns a business in Israel.