It always amazes me how much family members get behind and support their family members when they do things that are good and helpful to society. Anyone who is familiar with United Hatzalah has heard the trope that United Hatzalah is a family. For the 32-year-old doctor and volunteer Aryeh Jaffe, this couldn’t be more true.

Aryeh, a Jerusalem resident with 3 wonderful children, has been volunteering with United Hatzalah since its inception in 2006. Beginning as an EMT, he rose through the ranks to medic, paramedic, and now serves as a volunteer doctor. By trade, he is an OBGYN at the Shaare Zedek Medical Center, so he is truly a professional life-saver. 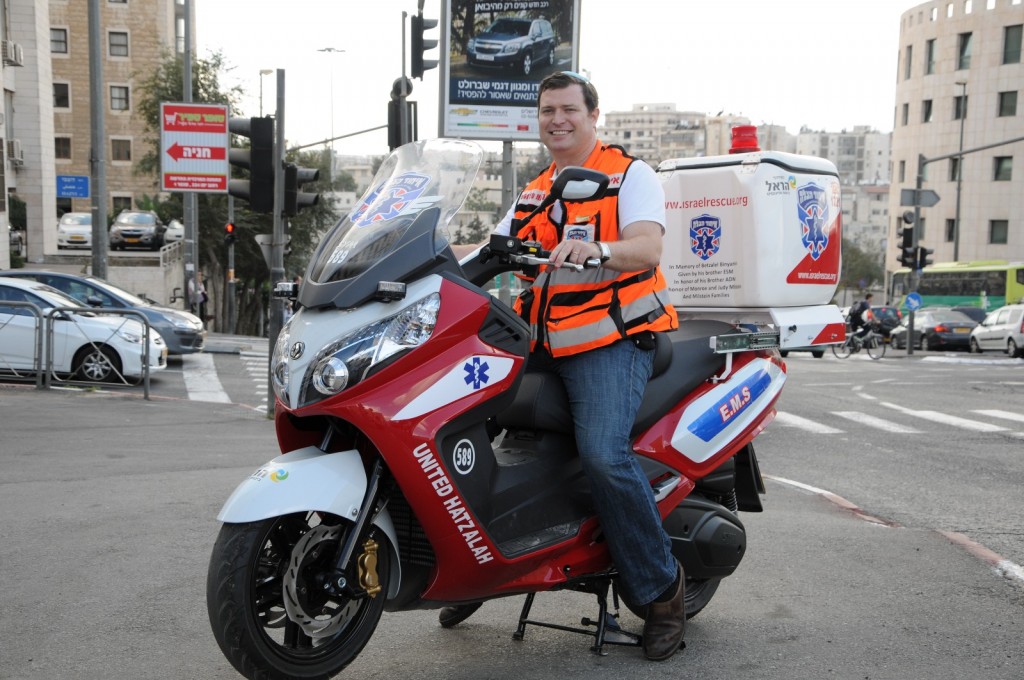 Aryeh Jaffe on his ambucycle

Recently, Aryeh was just coming home from an exhausting 28-hour shift in the medical center. As someone who works 80-110 hours a week as a doctor, Aryeh has developed a system for managing his volunteer work. After such an intense day, he keeps his phone unavailable for calls, except his father. On his way to shower after this particularly taxing shift, he received one such phone call from his father, who informed him of an emergency right by Aryeh’s house. 90 seconds later, Aryeh was not in the shower, but at the scene of the incident, taking care of a patient who had fallen from a distance of four meters off of the roof of a pergola onto the ground below.

Aryeh recalls the patient screaming in pain, making it almost impossible to even begin to immobilize his open fracture wounds. Luckily for the patient, Aryeh’s status as a doctor allows him to deliver pain medication to patients, which he did to this very man through an IV. Once the patient received the necessary narcotics for pain, Aryeh, and the two other volunteers who had arrived on their motorcycles, successfully immobilized the patient’s injuries. Nine minutes later, when the ambulance came, the patient was ready to go straight to the hospital.

While recounting this incident, Aryeh remembered another call for which he needed to drop everything and rush out of his home in order to respond. But this time it hadn’t been a shower waiting for him after a long hospital shift; rather, it was the night of his own Shabbat Chatan— a groom’s celebratory weekend the week before his wedding. During the celebration, a car crashed right outside the building in which the party was taking place. Aryeh rushed out to respond to the call. This time, he was accompanied by 10-15 other volunteers, all of whom are members of his immediate and extended family and who also volunteer for United Hatzalah.

Aryeh explained that nearly everyone in his family volunteers for the organization in some capacity: from his sister-in-law who works in the Psychotrauma and Crisis Response K-9 Unit to his brother who is a volunteer EMT and ambucycle rider. For Aryeh Jaffe, it really is all in the family.

At every family event, there’s always some interruption or delay because of a call for emergency care. Aryeh remarked that even those members of his family who don’t officially volunteer as EMTs or paramedics are still part of the lifesaving community. “Their support and understanding, as well as their willingness to step in when I or others are called off in the middle of Shabbat preparations, children’s carpools, or anything else, allows the rest of us who do volunteer to do our work to the fullest,” Jaffe said. “They say United Hatzalah is like a family. For me, United Hatzalah truly is my family,” he concluded.