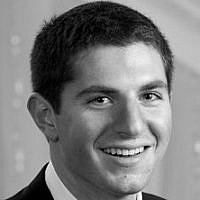 The Blogs
Zach Schwarzbaum
Apply for a Blog
Advertisement
Please note that the posts on The Blogs are contributed by third parties. The opinions, facts and any media content in them are presented solely by the authors, and neither The Times of Israel nor its partners assume any responsibility for them. Please contact us in case of abuse. In case of abuse,
Report this post.

A few weeks ago I had the opportunity to return to my alma mater, SAR High School, for Bogrim, a three week alumni program of learning, reconnecting, and giving back to our high school community. This year’s theme was “Tefillah in the 21st Century: Challenges and Opportunities.”

During the first week, we presented four models of prayer. I’d like to focus on two of them. On one side of the spectrum, there’s Rabbi Abraham Joshua Heschel. For him, “Prayer is spiritual ecstasy” in which man is the focal point. Yes, there is a set text, but real, authentic prayer “begins where expression ends…the thoughts are the essence of devotion, not the words,” writes Heschel. It’s all about the feelings. Prayer is an opportunity for man to open his heart to God.

Enter Yeshayahu Leibowitz. “The sole meaning of prayer as a religious institution is the service of God by the man who accepts the yoke of the Kingdom of Heaven.” He argues that spontaneous prayer, which would seemingly represent the ideal prayer according to Heschel, is “faulty” as a religious act, “since he who prays to satisfy his needs sets himself up as an end, as though God were a mean for promotion of his welfare.” The fixity of the liturgy is proof that it does not “reflect the state of mind or situation of the praying person.” Leibowitz’s conception of prayer is God-centric and makes no room for man’s emotions. Put simply, we were commanded to pray, so we pray. Period.

Initially, I gravitated away from Leibowitz. I felt he was too rough. Too detached. Heschel’s model was much more inviting. But as I began to think more deeply about the two thinkers I came to see a greater value in Leibowitz.

Tefillah education has always focused on the spirituality of prayer. It uses Heschel’s model to inspire. We speak of tefillah as spiritual rejuvenation as an opportunity for dvekut, or connectedness with Hashem. Perhaps, however, our conception of tefillah needs to move a little bit closer to Leibowitz and place a larger emphasis on commitment. The spiritual high envisioned by Heschel is unattainable for the average daily minyan-goer. It sets up a model for failure in which feelings dictate action. If I’m feeling it, I’ll daven. If not? No thanks. Religious practice based on emotion sounds nice, but it’s not sustainable.

I’m not suggesting that we completely disregard Heschel or even fully embrace Leibowitz. We must, however, rid ourselves of the notion that daily prayer is about achieving a spiritual high. We can use Heschel’s notion of tefillah to develop a spirituality born of commitment. While Leibowitz may reject any spiritual association with tefillah, his commitment model ought to be the starting point from which we strive to imbue tefillah with spirituality.

About the Author
Zach Schwarzbaum is a rising sophomore at New York University where he is concentrating in Arab-Israeli Studies and Public Policy. He spent a year at Yeshivat Eretz HaTzvi before college. He currently serves as president of Hillel at NYU
Comments