After last Shabbat, sorrows and grief spread around the British Jewish world, following the news of the death of Rabbi Jonathan Sacks. There was one exception. 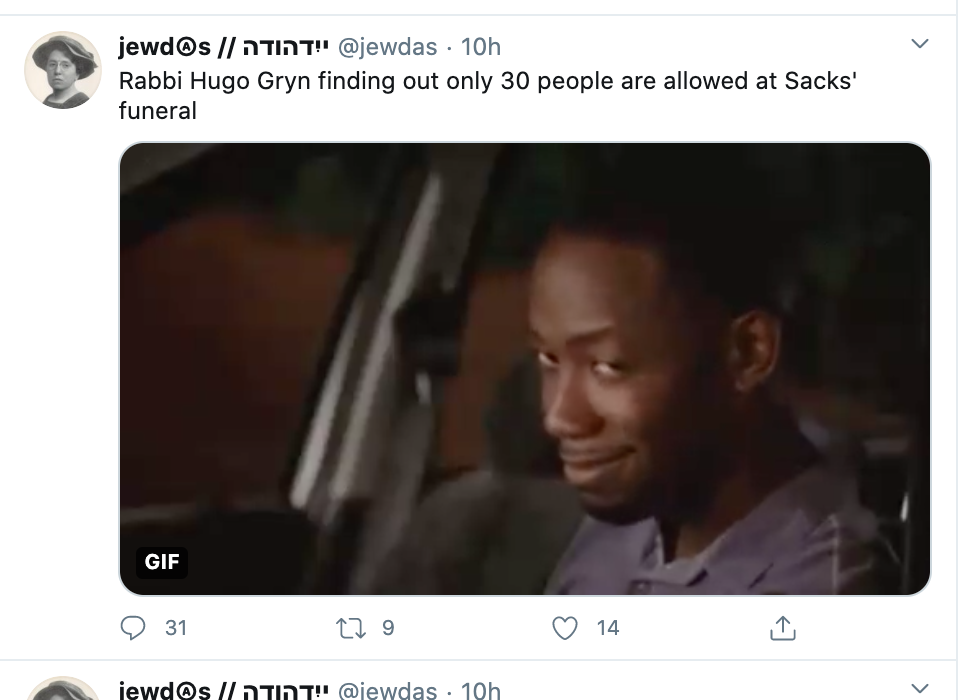 For those who are not familiar with British Jewish history, this link will provide the pieces of information needed. There’s really nothing to add. As Jews, we ought to behave as asked by the family of Rabbi Hugo Gryn z”l.

The anonymous person(s) hiding behind the JewDas monicker has managed to offend the memory of two rabbis, one of which just passed away, their families and all those who -reluctantly and with pain- have to abide regulations due to the COVID pandemic.

I, of course, don’t know who JewDas is/are. They behave like the Ku Klux Klan. Perhaps the person who used to sit next to you at shul is one of them. They want you to think so. Perhaps that Jew, the same you during Kiddush, when he’s at home he, lowers his (virtual) hood and endlessly intimidates and bullies Zionists via social media. So that Zionists are silenced, kept at bay, and the lie of the “increasing uneasiness with Israel” does not risk been challenged. I don’t think it’s a chance that JewDas pick up against newcomers to the British Jewish world. They need their victims to be vulnerable and without connections. Like the Ku Klux Klan, indeed.

I have the dubious honour of being the only Reform Rabbi ever targeted by JewDas. Periodically they unleash their fury against me and almost regularly some Far Left militant threatens to assault “a synagogue in Hove”. Every time this happens, I receive support, of which I am grateful. But the fact that said support has to be expressed privately speaks volumes.

I don’t know who JewDas is/are. But every time Pesach approaches I see on social media Far Left (British) militants proudly showing off their newly acquired copy of the JewDas Haggadah. I read how they share fond memories of that Pesach meal when none other than the friend of Hezbollah Jeremy Corbyn partook beetroot coming from his Holy Allotment.

I’ll repeat it. I don’t know who JewDas are.  But JewDas benefits of a network of formal and informal support, which gives them the freedom to go without consequences beyond the limits of good taste, or worse. I am happy to be proven wrong, but I suspect that even after this shameful episode, they will continue to enjoy the benefits provided by the silence around their identities, a silence no one dares to publicly break.

I have questions, for those who cover JewDas and shield their members from consequences. Do you think that with your silence you are helping any Jewish denomination, any movement, any synagogue? And how?

Do you think that the profile of the Jewish Left (whatever the expression means) raise because some comrade engages in (virtual) dancing at a Rabbi’s funeral? I don’t.

And about the Palestinians, which you consider paramount, please tell me how their lives are going to improve because a group of trolls make fun of a funeral in the UK.

I cannot see the benefits of keeping them inside our “big tent”. I see them abusing weak members of our community with impunity. I read the insults, I witness the pain they cause.

Enough is enough. If we believe in Tikkun Olam, making the world a better place, the time has come to apply the principle to our own home.