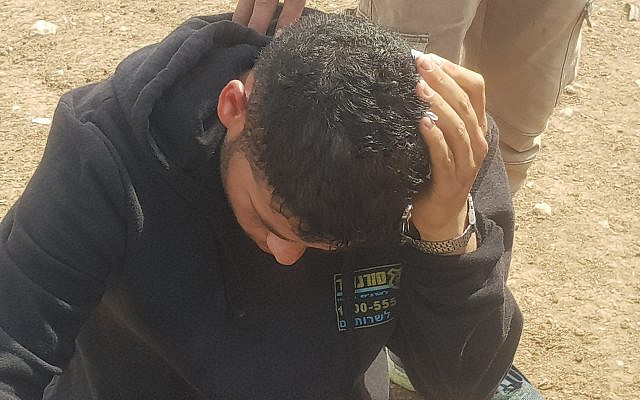 This week we were attacked and pepper sprayed by masked settlers, as we defended Palestinian shepherds. The army and police didn’t show up, despite our requests for help. When the activist who was pepper sprayed went to the police to lodge a complaint, he was told that it was a criminal offense to defend himself.

Today (Friday), the settlers attacked again. Unlike three days ago, the army and police rushed to the scene after a Palestinian tried to defend himself, and the settlers claimed they were attacked.  I arrived on the scene, and one of the settlers who had been walking normally dropped to the ground and began to hold his head. I asked if he needed help being evacuated, and he didn’t answer. The soldiers searching for the shepherd insisted they just wanted to talk to him, and hear his version. I reminded him that a few months ago two shepherds framed by settlers spent two weeks in prison, before finally being released. Some 20-30 settlers launched a pogrom in the nearby village, sending one young man to the hospital.  I wish a quick and speedy recovery to both the injured settler and the injured Palestinian.

The police who were in the village searching for the Palestinian didn’t arrest or detain the settlers, but did chase after them, and take their ID’s.

Having just arrived home, and with Shabbat approaching, I will write briefly. This week’s portion is Mishpatim/Shkalim. God lays out details of what is to be the Jewish legal system, to back up last week’s vision ensconced in the Ten Commandments. The basis of any legal system ought to be equality before the law. While we are not taught that explicitly this week, will be told, when “an eye for an eye” (interpreted by the rabbis as compensation, but the settlers today really wanted an eye for eye), that appears in this week’s portion, is repeated in Leviticus, “You shall have one standard for the non-Jew living among you and the citizen alike, for I am Adonai your God.” (Leviticus 24:22) The rabbis expanded the prohibition against unjust weights and measures to the prohibition against all unjust double standards, “eifa v’eifa.”

The struggle between particularistic discrimination in favor of those who are “flesh of our flesh,” and a more universal standard of equality is eternal. We also read in this week’s Torah portion of the famous “goring ox” In Mishna Baba Kamma4:3, we are taught, “If an Israelit’s ox gores a non-Jew’s ox, s/he is exempt. If a non-Jew’s ox gores an Israelite’s ox, whether s/he is simple or habitual, s/he must compensate for the full loss.” The rabbis of the Gomorrah (The commentary on the Mishna. The two together constitute the Talmud.) are bothered by this, but conclude that this refers to pagans, who do not observe in the seven basic laws that Judaism expects all humanity to observe. (Baba Kamma 38a). Many years later, HaMeiri (1249-1310) will cancel the many forms of discrimination based on this logic, arguing that the non-Jews of his day accept these basic principles.

Twice in our Torah portion we are taught not to oppress a non-Jew living among us, accepting our basic ground rules,
You shall not wrong a ger or oppress him/her, for you were strangers in the land of Egypt. You shall not ill-treat any widow or orphan. If you do mistreat them, I will heed their outcry as soon as they cry out to Me. (Exodus 22:20-22)

You shall not oppress a ger, for you know the soul of the ger because you were gerim in the land of Egypt. (Exodus 23:9)

On the first passage, Ibn Ezra (1089-1167) tells us to be aware of the power we have over non-Jews in our country, “When the non-Jew agrees not to practice idolatry you will not wrong him/her in your land. For, you have much more power than s/he does. Remember that you were gerim (strangers) in the land of Egypt. Just as the Torah mentions the fact that the ger has no power, it also mentions the orphan and the widow, who are Israelites, but have no power. Afterwards the Torah says, “And you shall not ill-treat” in the plural, it says “If you shall mistreat”(In the singular) For, anybody who sees somebody mistreating the orphan or the widow and does not aid them, s/he is also thought of as one who is mistreating. (22) And if you do mistreat. And here is the punishment. If one person mistreats and nobody comes to help out, the punishment is collective…

On the second passage, he writes that the judge has a particular responsibility not to discriminate against the non-Jew, “This is also directed towards the judge, so that the judge will not think to (automatically) side with the Torah of Israel(Jew) when an Israelite has an argument with a ger…”

The police officers who had to postpone their investigation of settler accusations to stop a settler pogrom, decided not to act eifah v’eifah. I hope that they will remember today next time we call and ask that they stop violence directed against Palestinians, or us.