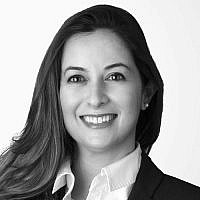 The Blogs
Meital Stavinsky
Apply for a Blog
Advertisement
Please note that the posts on The Blogs are contributed by third parties. The opinions, facts and any media content in them are presented solely by the authors, and neither The Times of Israel nor its partners assume any responsibility for them. Please contact us in case of abuse. In case of abuse,
Report this post.

According to the World Health Organization, a survey of 104 countries across the globe showed that women make up the majority of health care workers, almost 70%. In China’s Hubei Province, where the coronavirus outbreak first originated, it was reported that about 90% of health care workers were women.

In a different time, battling a different enemy during WWII, women were also in the front lines.  More than 2 million women had worked in war industries, hundreds of thousands, served in the different armies battling Nazi Germany, among them more than 150,000 Jewish women. WWII was in fact a turning point for the feminist movement, allowing women to serve in the army alongside the men for the first time.  Similarly, in the workplace, women undertook positions left vacant by men who were drafted to the army.  In England, women were admirably able to help maintain the strength of the British economy. However, when the war ended, women were forced out of such positions and majority of the married women went back to being homemakers. The subsidized daycare and economic support provided by the government to allow women to work during WWII were all repealed.  A lot of water has gone under the bridge since, both in the Thames and in the Yarkon rivers.

Prior to the Coronavirus outbreak, the #metoo and #timesup movements upended the public conversation about women’s issues around the world, and elevated the global consciousness surrounding the challenges women encounter in their daily lives, both personal and professional.

Research done in the U.S. found that companies practicing diversity in their senior hiring are both more profitable and rank the highest on the best places to work surveys. The Peterson Institute for International Economics found, based on data collected from 22,000 publicly traded companies across the globe, that companies with 30% female executives rake in as much as 6% points more in profits. A research published by Bank of America Merrill Lynch also found that gender diversity can boost return on equity, profits, dividends and market cap at a lower risk rate.  However, that it will take about 200 years to bridge the economic gender gap.  Its conclusion: Hire more women.

Perhaps now, when the economies are struggling, both in Israel and across the globe, in the deep isolation yet so very global, there is also an opportunity for businesses to rethink and restart.  We are all in this fight together. Equal among equals. And when we jointly defeat the Coronavirus, let’s not force the women back to where they were before like it was done in England 75 years ago. The more equal number of women in the workplace especially in senior positions, the less gender pay gap, the less Harvey Weinstein cases will be out there – not because of the stick of the public shaming trials, rather the carrot, of better productivity, higher profits and a pleasant, diverse and supportive working environment.

About the Author
Meital Stavinsky is a Miami and Washington D.C. attorney, member of Holland & Knight's Public Policy & Regulation Group and Co-Chair of the firm's Israel Practice. Meital focuses her practice on business, public policy and regulation, with a particular emphasis on Israeli emerging and advanced technologies companies in the areas of AgriTech, FoodTech, CleanTech and Advanced Transpiration Technologies. Meital assists Israeli companies seeking to enter the U.S. market and expand their operations in the U.S. She has successfully advocated on behalf of leading innovative Israeli AgriTech companies in raising their profile and advancing their goals before the U.S. Congress and key U.S. federal agencies, most recently in connection with the 2018 Farm Bill.
Comments