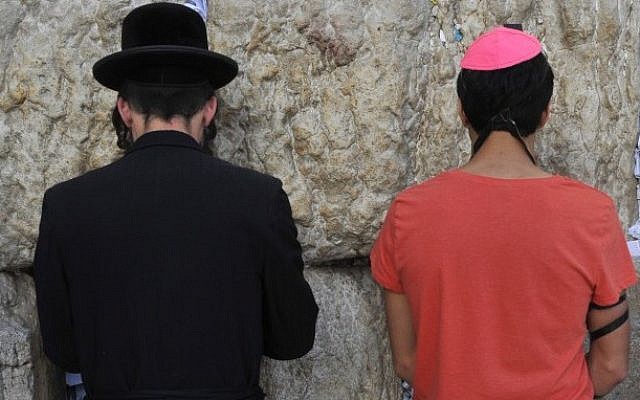 A Haredi and a secular Jew praying at the Western Wall in Jerusalem. (Serge Attal/Flash90)

I stand at the Kotel, the Wailing Wall.

I see the Wall with her frozen tears
And her passing clouds with many sighs.

Names from Auschwitz, Buchenwald and Dachau.
I see the auto-da-fes, the Crusades, the pogroms and the Roman torture chambers.

Mothers crying about their children,
Women of all ages.

There is also the businessman standing in tears.
The movie star, the politician, the housewife, the yeshiva student and the strong soldier.

Yeshayahu stands next to me,
A little further on, Rabbi Akiva.
My teachers: Maimonides and Yehuda Halevi, Hillel and Shammai,
Behind me the Gaon of Vilna, occupied with his thoughts
And the Baal Shem in deep meditation.
Men, women, children, Mitnagdim, Chasidim, Ethiopians, Yemenites, Sephardim and Ashkenazim, Jews of all colors.

There is no time, no clock, no early or later.
I stand but cannot grasp.
I say my tefillah.
Then the truth descends on me: I know,
I have never left this place.
I find myself here for four thousand years.

The return to Zion is unprecedented,
a happening sui generis.

The creation of the State of Israel is a surprise and a shock.
It confuses.

It is a breach in a world where people do not want to be surprised.

The Egyptian, the Babylonian and the Persian conquered the world with much noise, pomp and splendor and disappeared.
The Greek and the Roman followed with their drumbeat and war-carriages and died out.

Others came and held their torch high and burned out.
The Jew saw them all, surpassed them all and stayed immortal.

The Jew never left Israel. He was driven out against his will.
Titus and his army.
And the people of Israel protested.
They said, “No,” to anybody who made a claim.
In his prayers, in his songs, in his home, in the Beth HaMidrash,
At the time of his Chuppah and his burial and in his sermons.

It is only the Jews who keep on praying for its rebuilding, for two thousand years and no other nation.

It is only the Jews who mourn for two thousand years for its destruction and no other nation.

It is only the Jews who fast and sit on the floor for two thousand years on the day the Temple in Jerusalem was destroyed and no other nation.

It is only the Jews who for two thousand years break a glass under their marriage canopy out of sorrow for Jerusalem and no other nation.

It is only the Jews who for two thousand years build a house and leave one part of the wall unplastered because of the loss of their Temple and no other nation.

It is only the Jews whose women do not wear all their jewelry at once out of reverence for the destruction of Jerusalem and no other nation.

It is only the Jews who cover their dead with the dust of Israel when they bring their dear ones to their last resting-place outside the land of Israel and no other nation.

Is not every Jewish house in exile a piece of Israel on foreign ground?

This is the history, the reality and the future of Israel.

Inspired by the writings of Abraham Joshua Heschel and Mark Twain