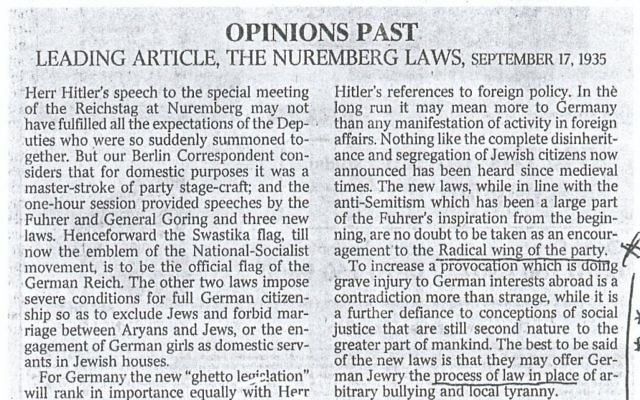 On Tisha B’Av details emerged of new European Union funding rules for projects which use EU citizen’s taxes in Israel’s capital city and the disputed lands of Judea, Samaria and Gaza. And yes, they are disputed, not illegally occupied.

Not that it’s weird for a continent on the brink of economic collapse to feel it should send its citizen’s money to this part of the world of course.

The actual text of the rules (pdf) is just another incremental step after of many years of dishonest discourse and the lethal subjugation of language for a political purpose: disconnecting Jews from the land of Israel.

Some are rushing to dismiss these new rules as of little importance. The sub-headings from this piece in Tablet Magazine list all the reasons we should not overreact:

They do not bind EU member states in their bilateral relationships with Israel. The guidelines do not affect trade. The regulations do not apply to Israeli governmental institutions, regardless of their location. The move is not, as some have suggested, a hardball attempt to assist John Kerry in restarting negotiations. They do not take effect until 2014.

And it reminded me of one of my very favourite quotes from a Times article from 1935:

The best to be said of the new laws is that they may offer German Jewry the process of law in place of arbitrary bullying and local tyranny.

That was what The Times of London wrote in a leading article entitled “The Nuremberg Laws” on September 17 1935. The article even contained this (my emphasis):

The new laws, while in line with anti-Semitism which has been a large part of the Fuhrer’s inspiration from the beginning are no doubt to be taken as an encouragement to the Radical wing of the party.

They painted the Nazi party as having a “Radical wing”. Contemporary sources are permeated with a search for “moderate Nazis”: people the free world could reason with.

Just as today’s EU rules carefully and craftily allow faceless EU bureaucrats to funnel their hapless citizen’s taxes exclusively to non-Jewish causes, the Nuremberg Laws did not spring from the air.

They were just another step in the process to separate Jew from non-Jew. The direction was clear to a few and covered up and excused by many, many more.

These sentiments shouldn’t come as a surprise: what is notable is how empowered they now feel to express their hatred.

Europe’s ruling elites hate Jews. For a while they covered this up well. But it never went away. Today they disguise their hatred as a love for the invented Palestinian cause, but it’s a very thin disguise we should all see through.

Scan from The Times of London Leading Article, The Nuremberg Laws, September 1935. Source: Brian of London scan.
About the Author
Brian of London made aliyah from the UK to Israel in 2009. For many years he has blogged and broadcast about Israel, technology and other subjects. Most recently he's focused on the experience of driving an electric car every day. Brian has a scientific PhD but today owns a business in Israel.
Comments