Evangelical anti-Zionism has broken through into the mainstream. A Dec. 14, 2015 article in the Washington Post highlights the effort to undermine Evangelical Protestant support for the Jewish state. The article, prepared by the Post’s religion reporter, Sarah Pulliam Bailey, describes the methodsthat anti-Israel activists have used in promoting their narrative. “They are taking trips to the Middle East, not only to visit biblical sites but to engage with modern-day Palestinians and Israelis in conversations centered more around modern politics than ancient texts,” Bailey wrote. “They are organizing conferences and writing publicly in an attempt to discern a new role for Christians in bringing an end to the Israeli-Palestinian conflict. Gradually, their ideas are taking hold, especially with young evangelicals.”

These are largely the same tactics used to advance the cause of the boycott, divestment and sanctions movement in the liberal Protestant churches in the United States. Anti-Zionist Jews from Israel and Palestinian Christians in the West Bank (both of whom have very little influence over their fellow countrymen) appear before Christian audiences in the U.S. and are lionized as peacemakers and prophets by church leaders, who in the Post article include Lynne Hybels from Willow Creek Church in Chicago and officials from a pro-Palestinian organization called the Telos Group, all of whom are given laudatory mention in Bailey’s article, which reads more like a press-release than a news story.

But even with her softball coverage, Bailey is right on her main premise– these activists are gaining traction that would have been unthinkable years ago. David Brog, director of Christians United for Israel, issued the warning in 2013, speaking to Jim Fletcher, a journalist who covers the Evangelical-Israel nexus.

“Anti-Israel activists are making surprising inroads into the evangelical community, especially among the Millennial generation. They are telling lies about Israel. But their lies are hitting the right moral notes and they are making progress. We ignore them at our peril,” Brog said.

It’s a big deal and a problem that can no longer be ignored by people concerned about U.S.-Israel ties and Christian-Jewish relations. For the past few decades, Evangelical Protestants in the United States have been Israel’s most loyal and vocal supporters. These Christians, who have a strong commitment to sharing their faith and place a high value on the reliability of the Bible, have been quite willing to spend their time, energy and money in an effort to communicate their support for Israel to elected officials in the U.S.

“The most conspicuous contribution evangelical politics have made to American life is the promotion of unwavering U.S. support for the state of Israel,” Robert Smith, a mainline Protestant scholar who has been critical of Christian Zionism and of the Jewish state, wrote in 2013.

The Evangelical Lutheran Church in America (ELCA), the church where Smith works, regularly condemns Israel and its supporters while remaining relatively silent about the ethnic cleansing of Christians and Yazidis from their homelands in the Middle East. The denomination, for example, has a website and a blog devoted exclusively to denouncing Israel’s security barrier in the West Bank, but has posted only a few articles about atrocities perpetrated by ISIS against the Yazidis in Iraq, for example. In the collective intellect of ELCA, Israel’s efforts to defend itself against suicide bombers merits more attention than the destruction of entire peoples such as the Yazidis and Assyrian Christians.

This is where activists are hoping to take Evangelical Protestantism in the United States, if they can.

In addition to producing a distorted and inaccurate primer about the conflict (Dale Hanson Bourke’s The Israeli-Palestinian Conflict: Tough Questions, Direct Answers), so-called peace activists have also produced two movies, With God On Our Side and Little Town of Bethlehem that have been marketed to young Evangelical Protestants in the U.S., particularly those at Christian colleges. Christ at the Checkpoint conferences, held every even-numbered year in Bethlehem, are another focal point for anti-Zionist propaganda. 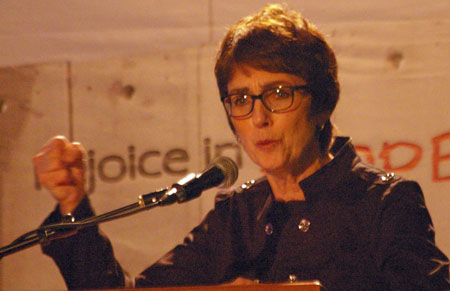 Lynne Hybel’s a prominent figure in American Evangelicalism, speaks at the 2012 Christ at the Checkpoint Conference in Bethlehem. This conference, held every two years, has become a gathering point for anti-Israel activists who hope to turn Evangelical Protestants in the U.S. against Israel. Hybels is a major figure in this movement. (Dexter Van Zile)

What all these items have in common is that they fail to address the huge levels of anti-Semitic incitement that has been a problem in Palestinian society for decades. They do not come to grips with the role Haj Amin Al Husseini, the Grand Mufti of Jerusalem, played in fomenting hostility toward Jews before, during and after Israel’s creation in 1948. Nor do they confront the Jew-hatred promoted on television shows in the West Bank and Gaza Strip and the rest of the Middle East.

Instead, the stories told in varying degrees in these two movies and Hanson’s book is that Israel can unilaterally bring an end to its conflict with the Palestinians, but will not because of unreasonable fear of the Palestinians or because of a radical theology that makes them unable to trade land for peace. No where do any of these items seriously challenge those aspects of Palestinian society (such as incitement) that make it difficult, if not impossible for Palestinian leaders to come to terms with the existence of the Jewish state.

The distorted narrative broadcast by these films and Hanson’s book has taken root in the Willow Creek Community Church led by Lynne Hybel’s husband, Bill. Wheaton College professor Gary Burge, author of the notoriously inaccurate and dishonest text, Whose Land? Whose Promise? What Christians Are Not Being Told about Israel and the Palestinians, has spoken regularly at Willow Creek.

In response to the challenge of anti-Zionism in American evangelicalism, the Committee for Accuracy in Middle East Reporting in America (CAMERA) is hosting a one-day conference in Los Angeles. The conference, which will take place on Jan. 18, 2016, is titled “The New Church Struggle.”

Other speakers include Shadi Khalloul, a Christian citizen of Israel who also serves as a Captain in the IDF reserves, and Rabbi Yitchok Adlerstein, director of interfaith affairs at the Simon Wiesenthal Center in Los Angeles. The keynote speaker will be David Suissa, president of Tribe Media Corp., which publishes the Jewish Journal of Greater Los Angeles.

The goals of the conference are to educate both Christians and Jews about the campaign to divide evangelicals from Israel, promote awareness of the Jewish roots of Christianity, and inform people about the status of Christians in Israel.

It’s time for some pushback.