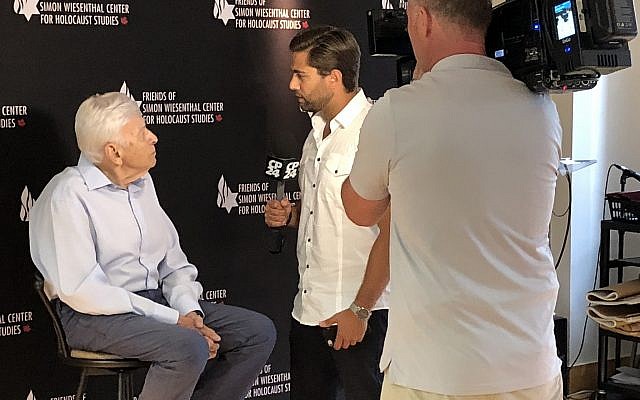 The week began with the horrendous desecration of a community Holocaust commemoration billboard with the picture of Max Eisen, a survivor of the Shoah and an FSWC educator. It came on the heels of our return from visiting Auschwitz, where Max’s family was murdered. The delegation of high profile Canadian law enforcement officials and directors of boards of education were shocked by the public display of hatred, but the incident brought home the very problem of antisemitism in Canada: it is alive and well and becoming more prevalent on our city streets.

While the Jewish community of Toronto only makes up 3% of the general population, it is targeted nearly 30% of the time according to Toronto hate crime statistics. This staggering fact led me to meet with the Deputy Chief of Police at Toronto headquarters early this week and subsequently, to meet with detectives to discuss specific hate crime incidents and their investigation. It’s time for everyone, including political leaders, to put antisemitism at the top of their agenda.

We held a press conference in our Toronto Tolerance Training Centre to give voice to Max Eisen – his interview was carried live on CP24 for the entire Greater Toronto Area to hear, learn and listen to a Holocaust survivor – to bear witness to the Holocaust and to understand the consequences of hate and intolerance. And so, what started as a hate crime, became an opportunity to educate and advocate against hate this week.

And while combating antisemitism here at home is critical, our voice must also radiate internationally. That’s why I flew to Ottawa this week to hold a number of consultations with ambassadors and policy leaders in the Prime Minister’s office. It’s imperative for European governments to be advised that we are keenly aware and concerned about the growing antisemitism and general intolerance in their countries. Ambassadors Pavel Hrncir (Czech Republic), Sabine Sparwasser (Germany) and British High Commissioner Susane le Jeune d’Allegeershecque were particularly engaging about incidents and issues in their home countries.

Since both the German and British governments alongside Canada were involved in the rescue operation of the Syrian White Helmets, the ambassadors were keenly aware of Israel’s critical role in the rescue. Like me, they were dismayed about the CBC’s The Current interview which downplayed Israel’s involvement and for certain argued that if anything, the rescue could not have happened without Israel. When Israel contributes to humanitarian efforts, media rarely report it and if they do, they downplay the effort at the risk of possibly siding with the only democracy in the Middle East.

Thus, we move the needle towards tolerance, justice and human rights forward each day. We meet with students and work diligently with them to help them heal wounds and become more compassionate people, as we did this week.

Simon Wiesenthal left us with much responsibility. We must remember the past and never take the present for granted.