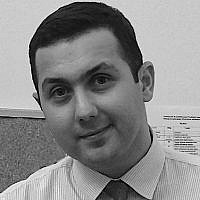 The Blogs
Ilgar Gurbanov
Apply for a Blog
Advertisement
Please note that the posts on The Blogs are contributed by third parties. The opinions, facts and any media content in them are presented solely by the authors, and neither The Times of Israel nor its partners assume any responsibility for them. Please contact us in case of abuse. In case of abuse,
Report this post.

President of Armenia Serzh Sargsyan appointed Karen Karapetyan a new Prime Minister of Armenia on September 13, following the resignation of his predecessor Hovik Abrahamian due to his inability to tackle the country’s economic problems.

Karen Karapetyan has previously worked as a deputy director (1996-1998) and chief executive (1998-2001) of ‘Armenergo’ energy company; a deputy energy minister of Armenia; a chief executive of the Armenian-Russian joint venture ‘ArmRosGazprom’ [now ‘Gazprom Armenia’, a subsidiary of Gazprom] (2001-2010), where allegedly he had embezzled large sums of money; a Mayor of Yerevan (2010-2011); a first vice president of ‘Gazprom Bank‘ in Moscow (2011); a deputy general director of Russian gas producer ‘Gazprom Mezhregiongaz‘ (since November 2012); a deputy director-general of another Gazprom subsidiary ‘Gazprom Energoholding‘ in 2015.

Appointment of the new prime minister ahead of parliamentary elections of April 2017 and the presidential elections of 2018 makes the duration of this post questionable. Because, due to constitutional changes of December 2015, the country is supposed to be ruled instead of the president, by the prime minister, who is expected to be Serzh Sargsyan himself as of 2018. Sargsyan described Karen Karapetyan as a “symbol of change” hoping he will be able to make substantial changes for the sake of the socio-economic situation in the country. This was a task of Hovik Abrahamian failed to fulfil and turned to be a ‘sacrificial lamb‘ for Armenia’s economic problems.

Serz Sargsyan‘s stay in power since 2008 attached dozens of problems to the country’s domestic portfolio such as: disputed elections results (2008) and violent response to mass protests; the frauds in the presidential elections (2013); Armenia’s accession to Eurasian Economic Union; the protests on electricity prices, pension reforms and transportation fares; the constitutional changes of December 2015 (envisaged the prolonging the grip of Sargsyan’s party over domestic politics with hope to win the 2017-parliamentary elections); the recent takeover of police-station by armed group and extraordinary public demonstrations in the country.

Past three years, Armenian government confronted the public protests against the price hikes for public transportation (2013), the pension reform (2014) and electricity fees (2015) dubbed as ‘ElectricYerevan’. Accordingly, Russia lowered the price of natural gas for to Armenia from $189 to $165 per 1000 m3, but the gas prices for Armenian consumers (about $400 per 1000 m3) was not decreased. Therefore, the appointment of Karapetyan to the prime minister post is considered Russia-orchestrated due to Moscow’s concern over the anti-Russia mood of Armenians and Armenian public’s support for opposition parties and mass protests.

In July 17, an armed group of radical opposition, which grabbed the some weapons after their voluntary participation in the Armenia-occupied Nagorno-Karabakh region of Azerbaijan during April escalation, seized a police station in Yerevan demanding the release of jailed opposition politicians and resignation of the current government and the president due their inability to handle Nagorno-Karabakh conflict. The standoff between the police and armed group triggered the public support and demonstrations for the latter and subsequent scuffles between police forces and the demonstrators, before eventually the armed group surrendered to the police. During the protests, the police forces used stun grenades against demonstrators and journalist to disperse a peaceful crowd. Human Rights Watch, Human Rights House Yerevan and Freedom House condemned the Armenian government’s authoritarian tendencies through the brutal response by use of excessive force peaceful protesters, the arrest of civic activists and the assault of journalist reporting on the demonstrations.

Demonstrations testify the combination of Armenia’s internal and external affairs, as the protests were not linked to ‘armed group’ only. The current economic profile of Armenia is quite pathetic. World Bank and International Monetary Fund forecasted quite a negative the economic growth in Armenia for 2015 due to the acceleration of depreciation of the dram, mounting national debt, shortfalls in budget revenues, decreasing foreign investments and withdrawal of international companies from Armenia. Armenia is strongly dependent on aids and remittances yielded by Armenian Diaspora and Armenians living abroad. Officially more than 600,000 Armenian citizens emigrated from the country due to economic situation (poverty, corruption, unemployment, increasing electricity and transport prices) and reigning oligarchic regime with impunity (the illegal seizure of public spaces for private business). Karapetyan will unlikely be able sort out these problems, since the political elite in Armenia is usually favouring their own business interests over the country’s interests.

Reportedly his son Tigran Karapetyan owns dozens of commercial properties in Armenia: a 50% stake in ‘Women’s Secret’ (women lingerie store); 1% in Dalma Invest Ltd.; small stake in Erebuni Plaza Ltd.; major share in Kliff Trade and Inv. Inc.; 65% in Florence Restaurant; 50% stake in Katana Ltd.; 100% in Spar Berry Ltd. (beauty salons and barbershops); 50% in Artsoleil Ltd. (a retailer of gasoline) etc. Tigran Karapetyan is a director of Kerbedanz CJSC (watch and jewellery retailer). The Karapetyan family owns a chain of gas stations in Moscow and is collaborating with Samvel Karapetyan, a Russian businessman.

Whereas, new prime minister kicked off the structural changes in the government by reforming certain ministries and committed revising the state expenditures and the electricity/gas tariffs and to establish a new ministry for assistance to entrepreneurs and to push the fighting against corruption. The appointments of new ministers affirm the formation of the so-called ‘government of technocrats‘ in Armenia, since newly appointed ministers are not political figures, but outside managers like Karapetyan himself. This makes the totalitarian control of Republican Party of Armenia stronger, but the political competition artificial.

Although Karapetyan is an outsider in terms of internal political scandals, however, the appointment of someone, who made his career in Russian Gazprom comes amidst the ‘standoff’ between Armenia and Russia. This disseminates speculations on his pro-Russian stance that he will unlikely endeavour to move Armenia away from its dependence on Russia. Because, Russian companies controls the most strategic assets of the country, including Armsberbank, Hrazdan Thermal Power Plant, Metsamor Nuclear Power Plant, ArmenTel (telecommunications company), Armenia’s Armavia Airlines and Armenian railway system, Armenia’s Efes Insurance Company, Ararat Gold Recovery, defense-matter industries such as AOZT Mars and AOZT Yerevan Scientific-Research Institutes, etc. Russian Gazprom [via Gazprom-Armenia] and Inter RAO-UES control Armenia’s entire natural gas and electricity distribution and transmission networks respectively. Gazprom also owns the Armenian section of Iran-Armenia gas pipeline. Moreover, Russia’s military bases stationed in Gyumri, Erebuni and Megri, Armenia’s membership to Eurasian economic Union and Collective Security Treaty Organization and Armenian immigrants (who provide 80% of remittances to Armenia) working in Russia  grant a leverage to Moscow over Armenia.

The appointment of Karapetyan coincides with the intensified Armenia-Iran gas talks on boosting the import of Iranian gas to Armenia. The former Prime Minister Hovik Abrahamyan had proposed Iran to increase gas purchase from Iran from the current 1 mcm to 3 mcm/d by late 2018 for gas-for-power barter, since Armenia is planning to build new gas facilities for its power plants and planned new power generation facilities. Allegedly, Russian Gazprom were angered by these talks suspecting Armenia of seeking alternatives to Russian gas. For that reason, Gazprom had opposed the enlargement of diameter of the Iran-Armenia gas pipeline in 2007 in order to prevent the export of larger volume of Iranian gas to Armenia and onwards [to Georgia].

All around, Serzh Sargsyan needed someone whom he could task the most challenging position in Armenia to respond to the previous prime minister’s rotten legacy, including the entrenched corruption, growing public discontent, economic downswing, mistrust to the government, high unemployment, pervasive poverty, etc. However, Karapetyan, instead of making substantial changes, will rather preserve the domestic status quo and prevent it from boiling to the extent of public demonstrations again, however, would lack authority to challenge the Russian companies and potent oligarchs controlling the economic and political life of Armenia. Whatever Karapetyan fabricate for the smooth running of socio-economic life of the country, the isolated status of Armenia due to closed borders with Azerbaijan and Turkey because of the occupation of Azerbaijan’s territories (Nagorno-Karabakh and seven adjacent regions) and the dominion of Russian companies over the transport and energy infrastructures of country will render these changes rather cosmetic.