WASHINGTON — The continuing political standoff between Qatar and its former allies in the Persian Gulf is ultimately damaging for the United States, says a Jewish counterterrorism expert who served as the first U.S. Treasury attaché to Qatar and Kuwait.

Michael Greenwald spoke to a packed audience March 1 at American University’s Center for Israel Studies. His lecture—“The New Normal in the Middle East: Israel’s Changing Relationship with the Gulf States”—offered an interesting perspective on the region from the point of view of a 34-year-old former diplomat who never made an effort to hide his Judaism.

“For me, all diplomacy is personal, extremely personal,” he said. “When I arrived in Doha in August 2015, a close Qatari friend was one of the first to welcome me into his home. It was 127 degrees that evening.” 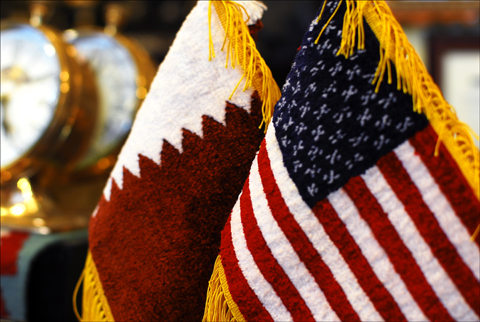 Miniature Qatari and American flags on display at a shop in Doha’s Souq Waqif bazaar. (Photo by Larry Luxner)

Over the ensuing two years stationed in Doha, said Greenwald, he became so close with some Qataris that they became like brothers and sisters to him. “I would explain to them my religion, and they’d explain theirs. Some are even joining me for Passover in Boston this month.”

Greenwald, now a senior vice president at Tiedemann Wealth Management, lecturer at Boston University and senior advisor at the Atlantic Council, said he soon realized that Jews and Muslims have quite a lot in common.

“When I would go to Qatari weddings or large gatherings, it felt like I was at a Jewish country club,” he quipped. “There are lots of misperceptions, but the thing that brings us together more than anything else is family. And once those family doors were opened, the course of my personal and professional diplomacy in the Gulf changed completely. My level of access and insight took on a very personal level.” 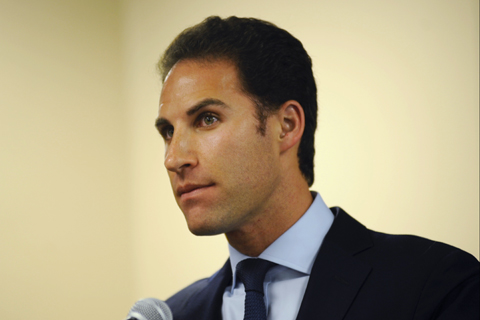 That kind of camaraderie is remarkable, considering the general hostility Gulf states have long displayed toward Jews and Israel—at least in public.

One month before Greenwald’s posting in Doha was to end, the worst diplomatic crisis in Qatar’s history erupted. Early on the morning of June 5, 2017, the governments of Bahrain, Egypt, Saudi Arabia and the United Arab Emirates announced they had broken ties with Qatar. Saudi Arabia then shut its land borders with the tiny emirate and—along with the three other countries—imposed a land, sea and air embargo against Qatar.

All four justified their actions on the grounds that Qatar works to support international terrorism, maintains warm relations with Iran and meddles in the internal affairs of their countries—charges which Qatar vehemently denies. 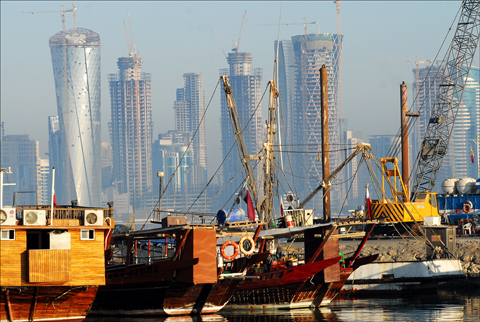 Brightly colored fishing boats stand out against a hazy skyline of modern buildings under construction in bustling Doha. (Photo by Larry Luxner)

In fact, other Arab countries have long expressed frustration with Qatar, particularly its past support for movements like Egypt’s Muslim Brotherhoood and Hamas. Several governments including Israel’s have complained that Doha-based Al Jazeera TV incites violence.

Early on, Israeli Defense Minister Avigdor Liberman said the rupture between Qatar and its neighbors “opens possibilities for cooperation in the battle against terrorism,” and that “even in the Arab states they understand that the danger is not Zionism, but terrorism.” 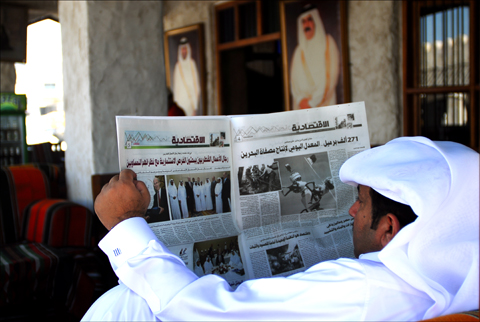 Qatari man reads an Arabic-language newspaper at a cafe in the heart of Doha’s Souq Waqif bazaar. (Photo by Larry Luxner)

“The U.S. has made progress in combatting terrorist financing. But with that engagement, you need continuous pressure,” Greenwald told his audience. “At Treasury, we attacked the lifeblood of terrorist organizations. And this latest blockade on Qatar has highlighted this threat more than ever. One of the core messages I drove home in almost every meeting there was to make the environment more hostile to terrorist financiers. It’s not enough the U.S. brings you information and asks you to take action. It’s your own banks being pro-active by themselves.”

Before coming to Doha, Greenwald headed the U.S. delegation to the Committee of Experts on the Evaluation of Money Laundering Mechanisms at the Council of Europe in Strasbourg, France. In his capacity at Treasury, he also worked closely with the White House National Security Council. 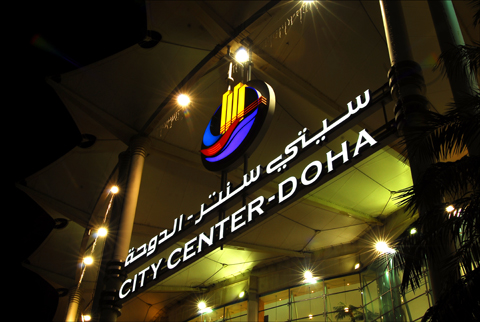 Entrance to City Center Doha, which has 350 outlets and is Qatar’s largest shopping mall. (Photo by Larry Luxner)

“The Middle East, and specifically the GCC [Gulf Cooperation Council] countries, is all about relationships,” he said. “But the lack of unity in the Gulf only plays into the hands of Iran and creates more problems for the United States. There’s nothing more important than trust—being able to rely on a partner. Unfortunately, that trust between the Gulf states has been broken.”

Greenwald suggested that such fractures may be long-term. For example, Algeria and Morocco closed their common border in 1984; it remains closed 34 years later.

He said Qatar’s conflict with its neighbors “is all historically tribal, and it’s based on personal differences built up over many years. Each of these nations has grown tremendously over the years, but that’s caused additional political, economic and social strife between them. Qatar has transformed itself from a pearl-diving economy into a hydrocarbon metropolis with the world’s highest per-capita income.” 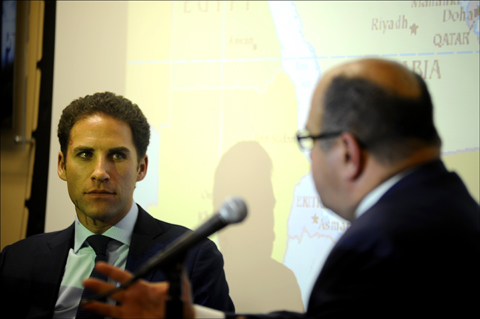 With fewer than 300,000 citizens and some two million expatriates, Qatar is a very small, yet very wealthy, country. It has invested at least $50 billion in the United States just in the last two years and has an estimated $335 billion of assets in its sovereign wealth fund.

“Qatar will be the first Arab country to host the World Cup, and Qatar Airways is one of the most important airlines in the world. It’s also home to the largest U.S. military base in the Middle East,” said Greenwald. Yet since June 5, when Saudi Arabia and the UAE began their blockade of Qatar, some $34 billion has left Qatari banks—money that’s not ever coming back.

As a result, Qatar has had to forge new business relationships, and this indeed may provide an opening for Israel.

“The whole region knows how talented the Israelis are,” he said. “The Gulf states want the best practices Israel employs, from cybersecurity to startups. These countries know they have to move away from hydrocarbons.” 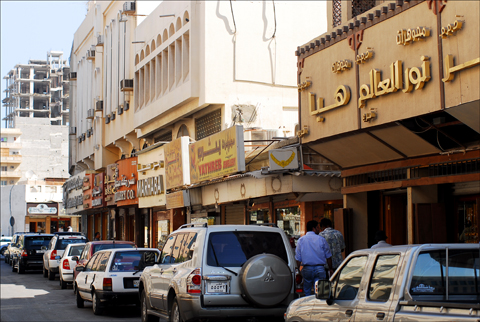 Traffic congestion in front of a shopping center in central Doha. (Photo by Larry Luxner)

Greenwald added that in his view, the Jewish state “does some of its best work behind the scenes. Some of the most sensitive areas that Israel’s had to tackle from a counterterrorism perspective don’t see the headlines.”He insisted that “tremendous cooperation” exists between the Jewish state and countries like Bahrain, Qatar, Saudi Arabia and the UAE.

Even so, he conceded that Gulf leaders have not hinted publicly at any of these existing business relationships—and there’s a very simple reason for that.

“The people aren’t ready,” he said. “I’m not saying that’s not right, but I think it requires leaders to start building that narrative publicly and domestically. Until that happens, everything will continue to be private.”