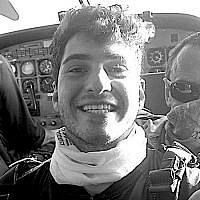 The Blogs
Josh Vlessing
Apply for a Blog
Please note that the posts on The Blogs are contributed by third parties. The opinions, facts and any media content in them are presented solely by the authors, and neither The Times of Israel nor its partners assume any responsibility for them. Please contact us in case of abuse. In case of abuse,
Report this post.

We arrived at the entrance of the mountain shortly before midnight. My friends and I had come from Tel Aviv seeking out the eccentric celebration that takes place on Mount Meron every Lag B’Omer. As secular students in Israel on a gap year program, we didn’t know exactly what we’d be doing all night, but we knew it would be a night of “culture shock” we’d never forget.

Once the shuttles dropped us off, we were able to quickly meet up with some friends from other gap year programs who had been at the mountain since before dark. We rejoiced at having made it. After more than three long hours on the bus, we had finally reached the gathering of tens of thousands of Orthodox Jews from around the country. Why were we here again? To experience another crazy night in Israel, of course.

Our friends pointed us in the direction of “the main event” – the bonfire at the gravesite of Rabbi Shimon Bar Yochai, the second-century Talmudic scholar who is credited with authoring the central text of Kabbalah called the Zohar. A small group of us sprinted up the mountain as if we were making our way through a crowded music festival in the United States. We got lost in crowds, separated from each other, and as I looked around, my best friend Ayden Wells and I realized we had been cut off from the others. We couldn’t wait any longer to see all the excitement. We took off.

We jumped over a railing and dashed through a congested corridor, following black hats and letting the momentum guide us. We found ourselves in a pit next to a stage filled with rabbis and one large bonfire at the center. There were an unfathomable number of faces above us as if we were in the center of a stadium. On the ground, though, the situation became worrisome. Neither Ayden nor I had control over our bodies; we were unable to reach for our phones and the pressure on our chests increased drastically due to severe overcrowding.

The worst panic I could’ve ever imagined

After less than 10 minutes in the ground-floor pit, a wave of force began pushing everyone towards the lone exit/entrance. It didn’t feel like any single person was pushing us, rather a general driving force sending us down the corridor, presumably because of the suffocation people began to experience. Panic had not fully set in, as confusion seemed to be the prevailing emotion present at this point. I recall feeling as if I was on a moving walkway – we did not pick up our feet or move a muscle. We glided alongside men and children onto a set of stairs. To my left was a young boy, probably 6 or 7 years old. “Where is your father?” I shouted in Hebrew, loud enough so he could hear me.

What took place next was a scene out of a horror film. As Ayden and I reached the bottom of the stairs, the railing in the middle completely collapsed on everyone being forced down. The worst panic I could’ve ever imagined occurred in this moment. Ayden and I both had a leg caught under the railing, but luckily we were able to escape as we had just reached the bottom. We turned back as we were running away, and all I could see were faces of agony. Crying, screaming, crushing images of people trapped on a seemingly harmless set of stairs, getting trampled over by other people who were suffocating and fighting for their lives.

Ayden and I made our way to fresh air adjacent to the corridor and onto the main road of the mountain, still watching the disaster occurring around us. There seemed to be a struggle with the police that only made things worse, as thousands of people tried to do everything they could to escape the ensuing chaos on the stairs. We watched as white barriers came crashing down; as people trapped behind went into survival mode, trying to destroy any obstacle to an exit.

We were in shock. Within a minute or two, first responders began running in with stretchers, clearing paths and yelling for people to move. We watched dozens of people being carried out with first responders relentlessly performing CPR to bring them back to life. The first few victims we saw were completely purple. 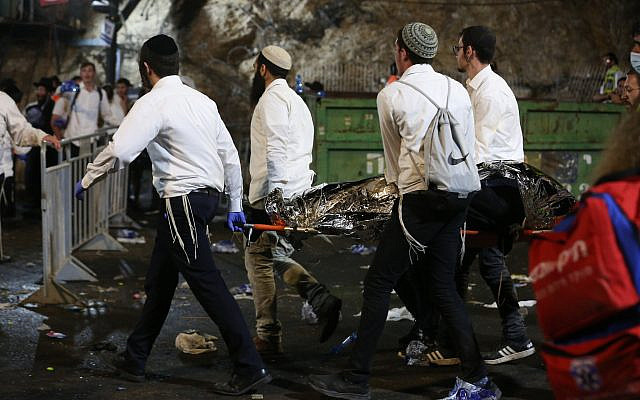 Israeli rescue forces and police at a mass fatality scene during a gathering for the Jewish holiday of Lag B’Omer on Mt. Meron, in northern Israel, on April 30, 2021. (David Cohen/Flash90)

We waited and waited, adrenaline at vigorously high levels as we struggled to understand what we were witnessing. First responders began putting victims on the ground and stripping their clothes to perform last-ditch efforts to save their lives. One after the other, dozens of people laid lifeless on stretchers being run down the mountain towards ambulances. I could not tell you if I saw more stretchers go in or more stretchers come out. Ambulances began speeding up and down as a domino effect of panic traveled down the mountain. Police pleaded with large crowds to disperse so paramedics and ambulances could do their job. Most people listened, but some continued to dance and play loud religious music on their speakers.

Over the course of an hour, Ayden and I witnessed several dozens of victims being carried out on stretchers, ambulances and helicopters urgently arriving, and festival goers helplessly struggling to find their loved ones. We were able to safely make our way down the mountain and reunite with the entire group we had come with. We made sure we were all physically okay, called our families, and got back to our respective bases in Jerusalem and Tel Aviv.

We’re still processing what happened and are incredibly thankful for our safety. Our hearts go out to the loved ones of every victim of this terrible tragedy and everyone affected by it. May the souls of those who passed be bound up in the bond of life.

About the Author
Josh Vlessing of Boca Raton, Fla., is currently in Israel on a gap year. He'll be attending the University of Pennsylvania in the Fall of 2021.
Related Topics
Related Posts
Comments