Isidor Kaufmann (1853-1921) did portraits of Jews in unglamorous places around the Austro-Hungarian Empire.

He received honors from the Habsburg Emperor, the Prussian Kaiser and the Russian Czar.

But who has ever heard of him?

Maybe you. Not me. Sic transit gloria mundi.

But we need to look again.

I certainly need to look. Because…

Because here is a man I would see on the sidewalk here in Poland. 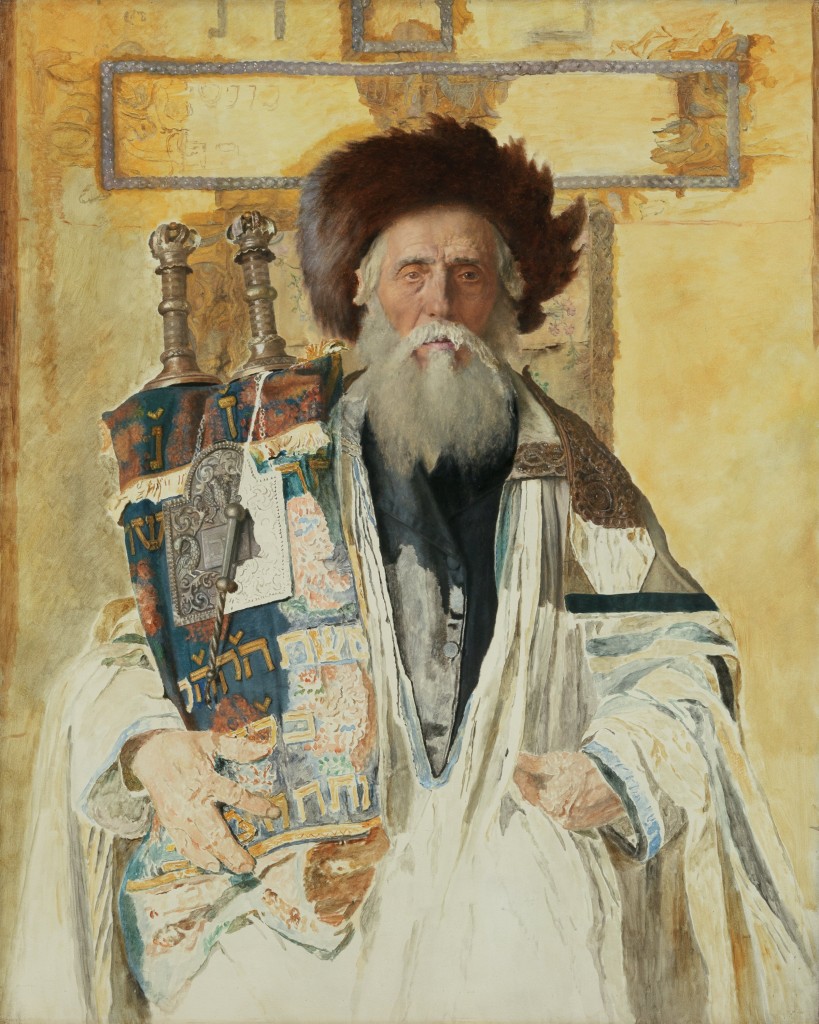 Were it not for…

And here is a man who would be studying in a cheder in my town or leading prayers in some shul. 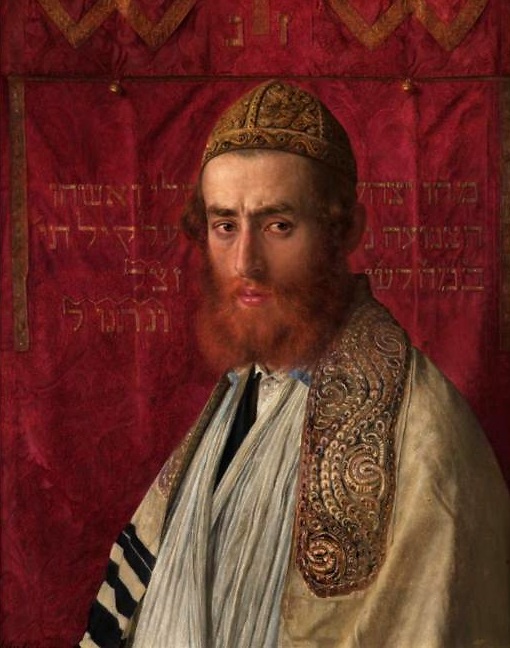 Portrait of a rabbi wearing a kittel and tallit (Wikimedia)

Regular readers know that I live in Poland.

These are the faces missing from Poland today.

These are the faces I miss. 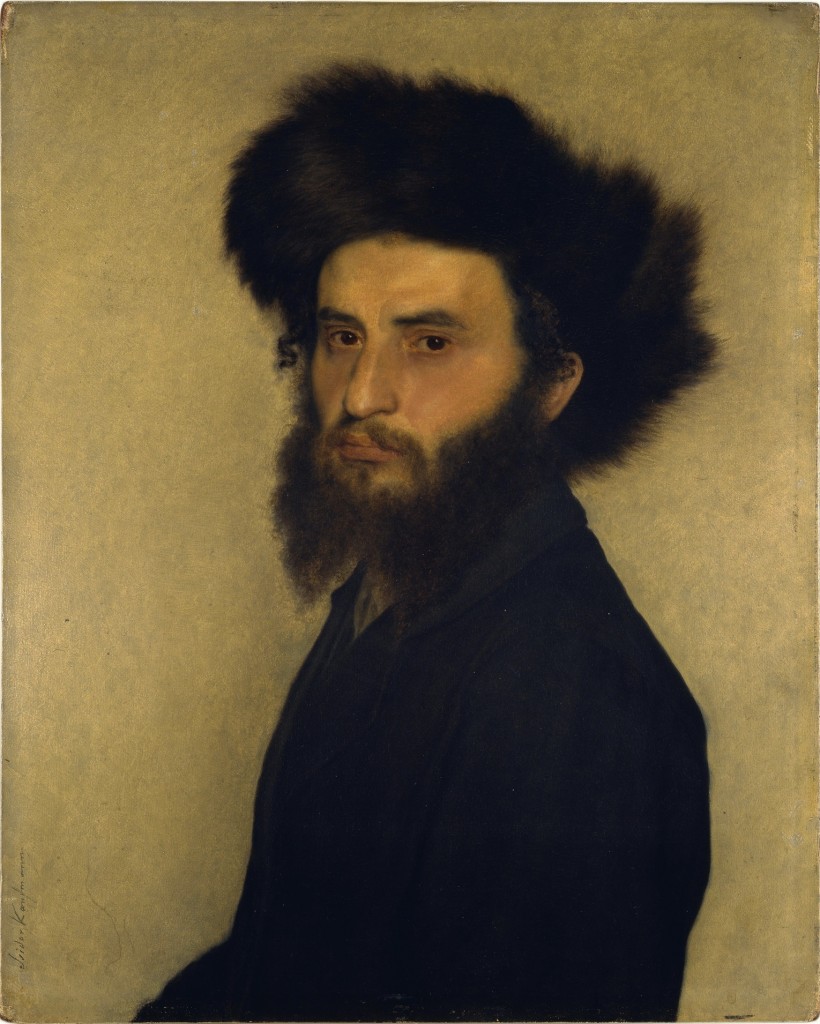 The faces have souls. They are human and humane. They are alive.

But the men behind them live no longer.

Who was this Kaufmann?

The great Jewish Encyclopedia of 1906 explains, “He was originally destined for a commercial career, and could fulfill his wish to become a painter only later in life.”

To the encyclopedia, “later” means he was 22 when he started painting. (The encyclopedia was written by a committee of mothers-in-law.)

In 1875, Kaufmann went to the Landes-Zeichenschule (literally, “Provincial Drawing School”) in Budapest, where he remained for one year.

In 1876, he went to Vienna, where he was refused admission to the Academy of Fine Arts. (I’ll give you one guess why.) Instead, he became a pupil of the portrait-painter Joseph Matthäus Aigner, best known for stuff like “Portrait of a lady with her dog.”

Then — still on the academic road — he entered the Malerschule (Painting school) of the Vienna Academy.

So far, so conventional.

So why did Isidor Kaufmann decide to give us the Jews? What made him sally out from Vienna into the geese-in-the-streets arcadia of a hasid’s Poland? 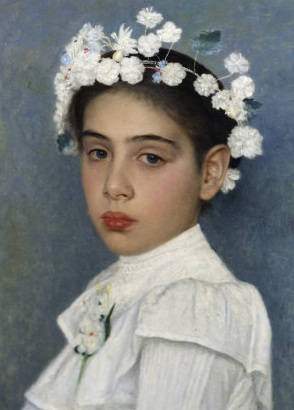 Girl with flowers in her hair (WIkimedia)

People call Kaufmann a “genre painter” — which is to tousle his hair and call him cute. A genre painter shows you peasants dipping candles or girls and boys in Trachtenkleidung flirting around a well.

I think I know him. 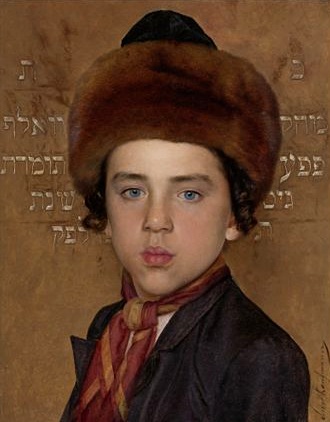 Portrait of a youth (Wikimedia)

So the question comes back: what made Kaufmann go — and stay — among the pious Jews of Poland?

Maybe it’s because, though he died in Vienna, he was born in Arad — 145 miles southeast of Budapest. 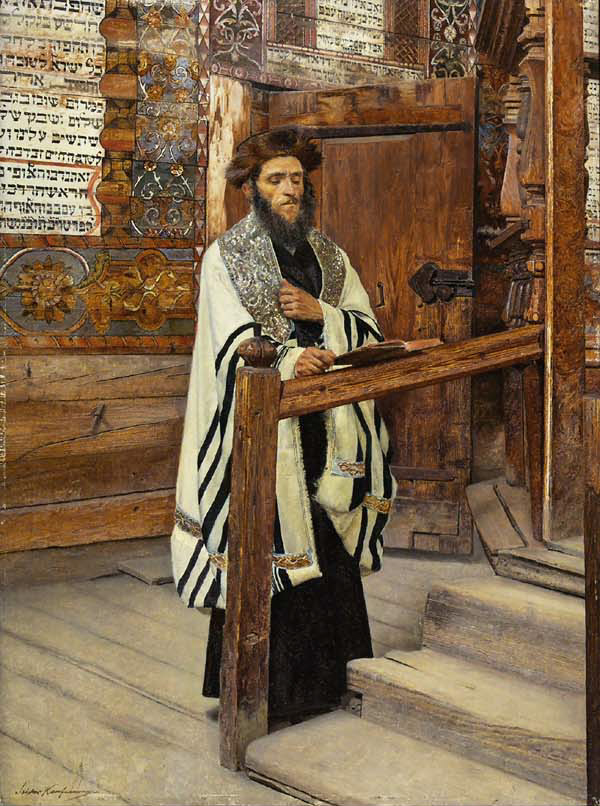 A rabbi reading in the forecourt of the synagogue (Wikimedia)

Arad is in western Romania now. In Kaufmann’s time it was in Hungary.

Then as now, Paris it isn’t. 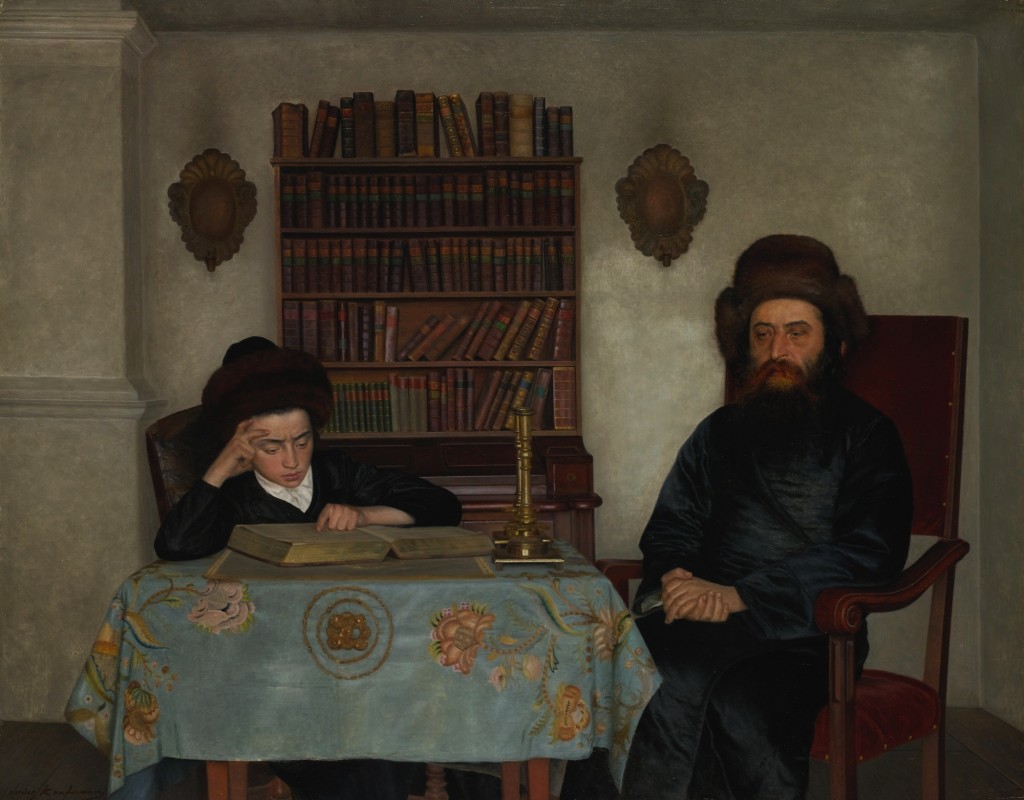 And this is where Kaufmann came from. So: why go back to the sticks?

Since 2014, the renowned historian Simon Schama has been publishing volumes of his The Story of the Jews. That same year, he put out a gorgeous 5-part documentary under the same title.

In the third episode, called “A Leap of Faith” — the show covers the emancipation of Europe’s Jews after 1789 — Schama comes to the musical career of Felix Mendelssohn, the composer. Felix was the grandson of Moses Mendelssohn, the great maskil. 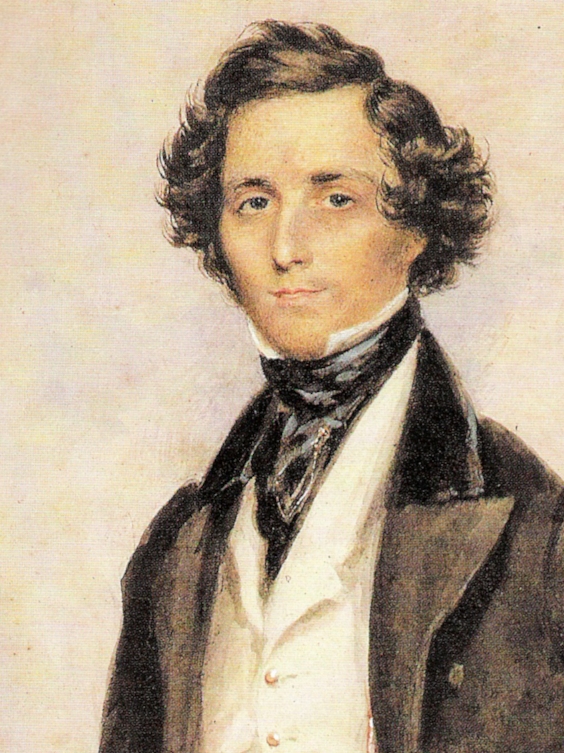 But Felix was a goy. Despite his lineage, his father had him baptized a Christian at age 7 — hoping to ensure his future prospects.

Schama says: Felix Mendelssohn was a Jew nonetheless. Despite the sprinkling. Despite his own desire to de-judaize, assimilate and “pass.”

The proof of Mendelssohn’s irrepressible neshamah is in Mendelssohn’s Violin Concerto in E Minor (Op 64). It premiered in 1844, just three years before his death.

Listen to that violin. At a late hour in his life, the Jewishness Mendelssohn had been stuffing down burst out like batting from a split sofa.

This is a composer who is living in the age of romantic nationalism, where everybody is looking for a label and everybody is keen on identity.

Mendelssohn never refers to his Jewish background. Mendelssohn is in denial.

But when it comes to his most famous work, there is a Jewish imprint on it. Take a look at the “Violin Concerto in E Minor” and tell me why that is not a Jewish work.

It’s exploding. It is coming out of the composer and out of the violin. It’s an unstoppable force. It’s so over the top. It speaks of suppressed emotions and suppressed ideas… and a suppressed identity, in Mendelssohn’s case.

When it actually comes to the performance, Mendelssohn can’t conduct it. He goes into a hissy fit. He’s not feeling well.

He leaves it to someone else.

He can’t do it. It’s too personal.

A breakdown on opening night: the deep logic of history is revealed by such tidbits.

And what has this to do with our Kaufmann? 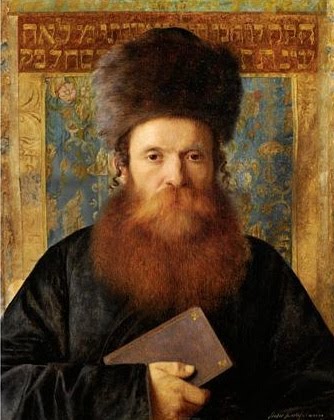 Portrait of a rabbi (Wikimedia)

Maybe it explains why Kaufmann got out of Vienna.

Maybe it explains why he spent years as an itinerant in unenviable conditions — someone who could have sung, like Molly Picon in her film made in Poland in 1936,

(Over fields, roads,
on a wagon of hay —
In sun and wind and rain
Two musicians ride.
A chiddush, yes a chiddush:
Tell us, who are they?)

Kaufmann’s backside would have known how Yidl’s felt.

But perhaps Kaufmann had had enough of “Ladies with Dogs” in Vienna — enough of dumplings, the opera and Kaffeehauskultur.

Maybe he needed something deeply particular — deeply his.

And so he gave us images that are timeless and universal. Images that breathe.

He gave us Jewish faces — the faces of our missing neighbors. 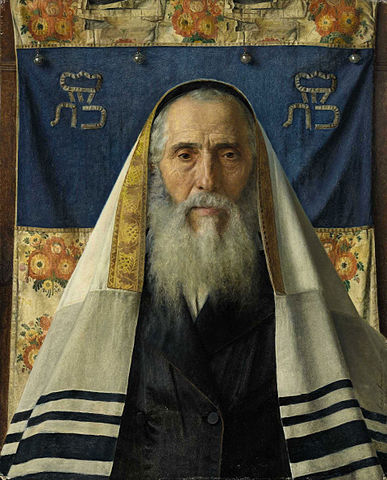 And if we are ready to face faces like this, we can start with the works of Kaufmann.

As you contemplate a Kaufmann, you come waltz-close to someone you might rather not see. 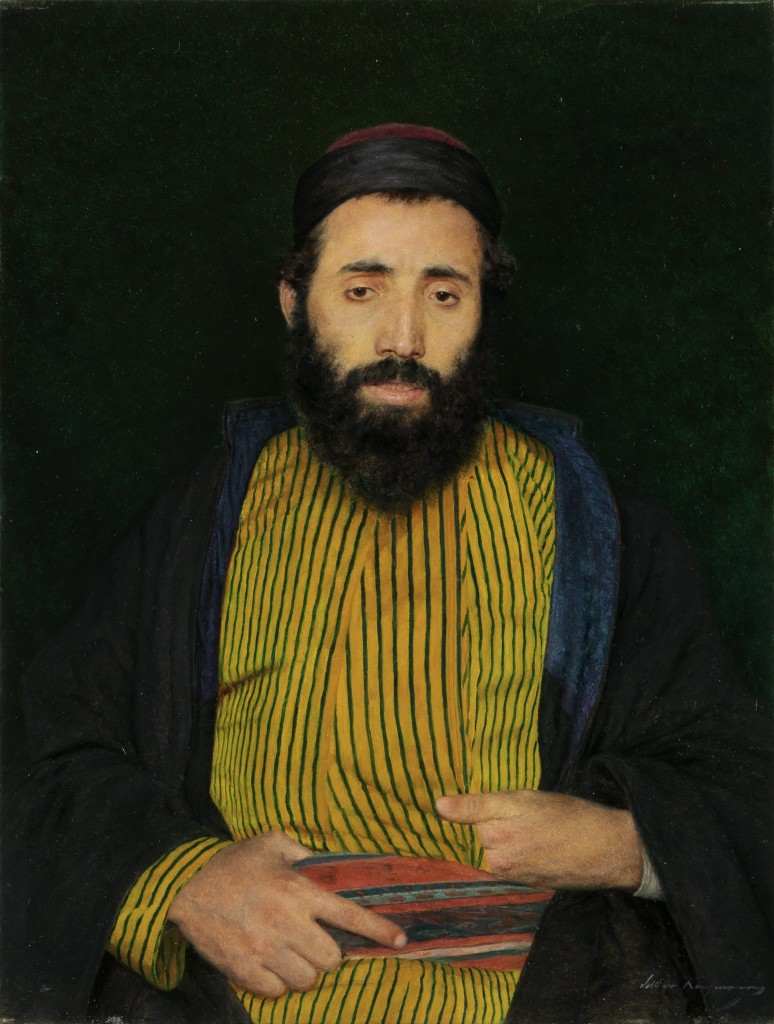 It’s the frummer yid, the yeshiva bocher, the holy scholar of herring-bones, shmaltz and snuff.

This is the man of whom Heinrich Graetz — a historian born in 1817 just 60 kilometers from where I’m sitting, in Xions (now Książ Wielkopolski), in the Grand Duchy of Posen — wrote:

On the one hand, enslaved Judah with his wanderer’s staff in hand, the pilgrim’s bundle on his back, his grim features turned heavenwards, surrounded by dungeon walls, instruments of torture and the glow of branding irons; on the other, the same figure with a questing look in the transfigured features, in a study filled with a vast library in all the languages of man… a slave with a thinker’s pride.

“To seek and to wander, to think and to endure, to learn and to suffer take up the long span of this epoch [of the Diaspora],” he wrote.

Maybe we should be glad that epoch is over.

And after all, there are Jews elsewhere.

But I look at Kaufmann’s faces — these Polish Jewish faces — and I sorely miss these Jews.

A contention: it is not time, in Poland, to put away the wounds of memory. There’s been enough of that; enough attempts at that.

No: it is time to take the wrappings off the wounds and look at them.

It’s time to face the neighbors.

Isidor Kaufmann’s paintings — these living paintings of the dead –are a way to begin.