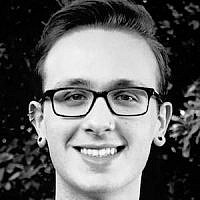 The Blogs
Anthony Safir
Apply for a Blog
Advertisement
Please note that the posts on The Blogs are contributed by third parties. The opinions, facts and any media content in them are presented solely by the authors, and neither The Times of Israel nor its partners assume any responsibility for them. Please contact us in case of abuse. In case of abuse,
Report this post.

I began my college career at a university in Germany. What was supposed to be an amazing three-year adventure quickly turned into a situation where I couldn’t be myself for fear of the backlash I would face. Walking down the streets of Berlin, I would often see anti-Semitic leaflets on the ground, pamphlets about protests against Israel, and other literature handed out by both far-left and far-right extremists. I realized that the community I had hoped to become a part of in Germany would not welcome me as a young, gay, Jewish person, and so I chose to return to the United States to continue my education.

After I left Germany, I enrolled at Portland State University (PSU), hoping that the open and tolerant community there would be one in which I would feel safe to be myself. It has been disappointing that over the past year, factions in our school’s community have sought to make supporters of Israel feel unwelcome and uncomfortable. More and more, I find myself exposed to the very destructive and discriminatory experiences I tried to leave behind in Germany.

It’s no secret that the Portland State community – and Portland in general – is a very liberal area. I find it sad that some believe that disqualifies them from being able to support Israel. Israel upholds the values that liberals hold dear – freedom of religion for all, freedom of speech, gay rights, women’s rights, and more. I witnessed much of this firsthand when I went on one of Birthright Israel’s LGBT+ trips. During the trip, I met LGBT activists like Yiscah Smith, learned about serving in the Israel Defense Forces from LGBT soldiers, and joined thousands of Israelis and international tourists in celebrating pride season in Israel. There are few things more powerful than to stand in the Middle East as openly gay, feeling both welcomed and safe. There is literally no other place in the region – not Gaza, not the West Bank, not Egypt, not Lebanon – where one can do that.

The decision made earlier this week by the Associated Students of Portland State University (ASPSU) to pass a divestment resolution presents a one-sided view of the Israeli-Palestinian conflict and creates a campaign of hate against Israel and its supporters that is neither productive nor appropriate on campus.

With their persistent efforts to pass a BDS resolution, our student government has severely alienated the Portland Jewish community when we needed our student representatives most. Last year, six swastikas were carved into various doors in a dorm building. ASPSU could have helped to address these injustices with the university, but instead they focused their efforts on leading a divestment campaign against the one Jewish state in the world.

Many students hoped members of the student government would work to resolve issues that matter to students on this campus, like tuition increases, the Black Lives Matter movement, and fighting for a living wage for campus workers. Instead, ASPSU passed a resolution that, according to our university president, is both divisive and ill-informed. In fact, as President Wiewel pointed out, PSU’s funds, which are managed by the Oregon State Treasurer, cannot even be used for equity investments. This divestment resolution is nothing more than a deliberate campaign of bigotry.

Like most of my peers, I hope that in my lifetime I will see a secure Israel and an independent Palestine living side by side in peace. Unfortunately, this resolution does not support that same vision. Instead of focusing on efforts that build bridges between Israelis and Palestinians, ASPSU has passed a resolution that demonizes and ostracizes one group. Moving forward, I hope our student government will join me in encouraging dialogue and seeking solutions that are not filled with divisive rhetoric and hate. We deserve a student government that challenges us to work together. Divestment only divides our community and prevents PSU from celebrating its diversity and open-mindedness.

About the Author
Anthony Safir is a junior at Portland State University (PSU) and co-President of PSU’s Cultural and Historical Association for Israel (CHAI). He was born and raised in Los Angeles, CA.
Related Topics
Related Posts
Comments