No one can understand what it is like to lose a family member. You can’t breathe, you feel like you personally were hit by a truck, and sometimes you feel like you would like the world to stop because how can it continue, when your loved one is gone. Nothing will ever be the same. You won’t be able to share simchas with that person, or sorrows. Around you, despite your feelings, the world does go on and you have little choice but to go on with it. Sometimes you are just surviving, but if you are strong enough, you can put the pieces of your heart back together, and find your way back to life.

Today is Israel’s Memorial Day for those who have given everything for our tiny state to continue to do more than survive—to grow and thrive. This day does not only remember our soldiers who died in our far too many wars, but also those who have been labelled ‘soldiers’, from young to old, Israeli citizens and Jewish visitors. Today we try to be with those who have lost family members, to show them they are not alone, because we are all family.

Just this past year has seen the list of those who died include of babies at train stations, young women at bus stops, 67 of our young men in uniform and six Israelis during the Gaza war, and three boys who only wanted to get home for shabbos. 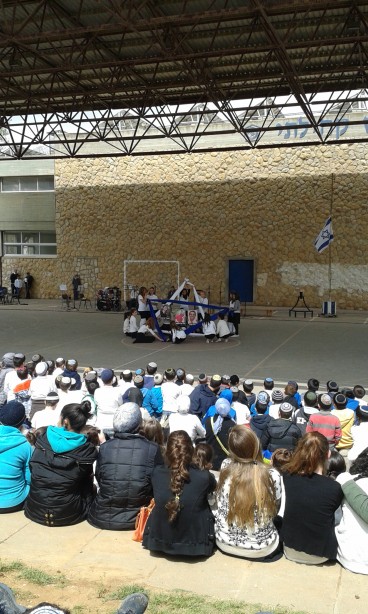 Last night I watched the Memorial Day ceremony on TV, which had beautiful, sad speeches and a torch lighting; it felt like a continuation of last week’s ceremony for the Shoah, especially when the same army lieutenant sang yet another soulful Kel Maleh Rachamim for the souls of the fallen. Today, my school had a ceremony where part of it was an interpretive dance set to a poem about the kidnapped boys; the poet, a cousin of Gilad, wrote eloquently about what I mentioned above. She talked about not being able to see these boys grow up, missing them at the Shabbat table, and how they lost the chance to do any more good. A young man from our area was also discussed; Yuval Hyman gave his life in the tunnels of Gaza to save his comrades and protect his country.

The siren in memory of all of our fellow citizens, during which a missing-man formation flew overhead, sparked sadness in me, and yet at the same time I thought about the words of a twelve year old girl who lost her father in last summer’s war. She said that some people find it difficult to go from the sadness of today into the joy of our Independence Day which starts tonight: as Memorial Day wanes, we begin to celebrate. She said that instead of feeling strange, it gives her comfort. Because in the senselessness of death, she knows that her father died for something, for our country not just to survive, but to live. So as we all stood together and bowed our heads silently during the siren, I thought about the part of the ceremony where the children parade around with Israeli flags.As we ended with a communal “Hatikva”, I looked at the generations standing together, proud of what we are building. Part of me dreads next year’s ceremony, and who might have joined the list of holy souls who have given all for this land, but I know I will be standing together with others who are here to make sure that Israel is a thriving Jewish nation.